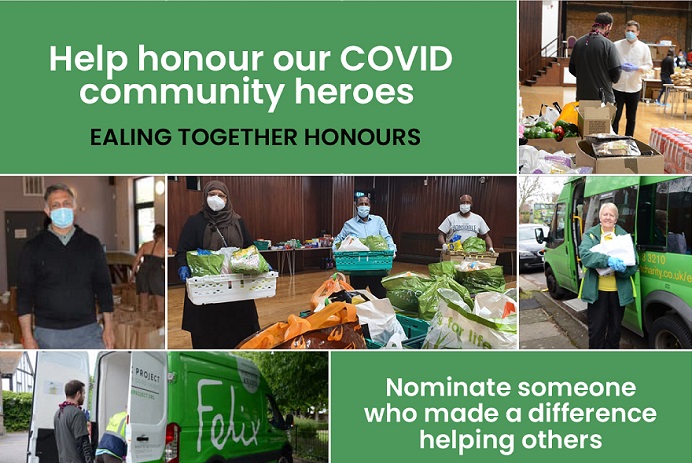 Ealing Council is today (Friday, 31 July) launching its Ealing Together Honours scheme. The scheme will recognise, celebrate and honour local community heroes who made a difference during the COVID-19 pandemic.

Residents are asked to help spread the word and to let us know about anyone who they think should be recognised. People have until Monday, 31 August to submit their nominations on the Ealing Together website. Alternatively handwritten nominations can be accepted by post: Ealing Together Honours, Perceval House, 14-16 Uxbridge Road,W5 2HL.

Anyone who lives, works or studies in the borough can be recommended. Community organisations are also eligible.

People cannot nominate themselves and local councillors cannot be nominated. Staff and contractors of Ealing Council can be nominated for activity carried out in a personal capacity such as volunteering but not for work which is part of their day job.

Those nominated will receive a personal letter of thanks from the Mayor of Ealing and the Deputy  Lieutenant for the London Borough of Ealing.  We hope that in future it will also be possible to organise an event to celebrate the community response once we are confident the virus is no longer a risk to public health and safety.

‘The hallmark of a true community’

The Deputy Lieutenant for the London Borough of Ealing, Richard Kornicki and the Mayor of Ealing, Councillor Dr Abdullah Gulaid have issued a joint statement:

“As Her Majesty the Queen said, our nation’s history has been forged by people and communities coming together to work as one. The response shown by the people of Ealing to the virus has been a remarkable demonstration of this.

“Time and again we have seen that instinctive support of one for the other that is the hallmark of a true community. This has come from groups that already existed, from bodies set up to respond to the virus, and from individuals who simply saw something they could do and just got on with it. This is our chance to recognise all those who have made a difference and to put on record our thanks for everything they have done.”

The Ealing Together coalition launched on 24 March. It is a collaboration between the council, community groups, charities, businesses and concerned residents who joined forces to take care of the most vulnerable residents.

During the pandemic, residents could contact Ealing Together to request help for themselves or someone else, volunteer as part of the COVID response or offer to donate goods or services. By the end of July, more than 20,000 requests for help had been received through the Ealing Together phone line and website.

Councillor Peter Mason, cabinet lead member for Ealing Together, said: “Ealing Together was a fantastic joint effort that assisted thousands of vulnerable people in our community during COVID-19. However, we know that it was the tip of the iceberg and that thousands more local people played their part in Ealing’s amazing community response, usually without recognition or reward.

“I would like the Ealing Together honours scheme to recognise everyone who contributed to the community response, including the unsung heroes who acted alone out of an admirable sense of compassion and community spirit.

“If you know of someone who helped others, or if you received help from someone, please let us know. We are looking forward to meeting these local heroes face to face as soon as we can safely do so. In the meantime, we want to thank them and let them know that their actions were seen and made a difference.”