Home > Have your say on park at Southall Waterside 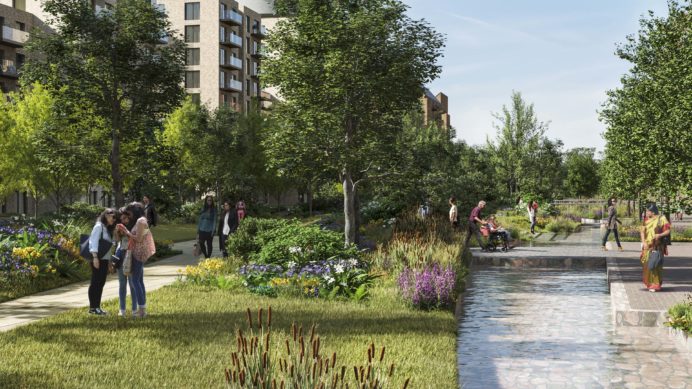 Have your say on park at Southall Waterside

A consultation is now under way on proposals for a new 500m-long park at the Southall Waterside development.

The proposed park, designed in partnership with London Wildlife Trust, would be roughly equivalent to four football pitches. The idea is that it would provide a variety of spaces for community activities, including an amphitheatre with the potential to host events such as an open-air cinema, music and dance performances.

In addition to this, there would be fitness and activity trails and spaces for the whole community to enjoy, as well as a water feature which would run the length of the park, with bubblers and jets where children can splash and play.

Natural space for people of all ages

The intention is that this new park would be the first part of a much larger network of green, open spaces created across the development. Subject to planning permission, a second park will be created too, and 1.2km along the Grand Union Canal will be opened up for people to use.

Developer Berkeley plans to work with local people to curate a programme of arts and cultural events that would be hosted in the new park throughout the year for everyone to enjoy.

Southall Waterside is one of the capital’s largest regeneration projects, with brownfield land being transformed into a new neighbourhood with 3,750 mixed tenure homes, a commercial district, community hub and a network of cycling and walking routes, including two new footbridges into the 90-acre Minet Country Park.