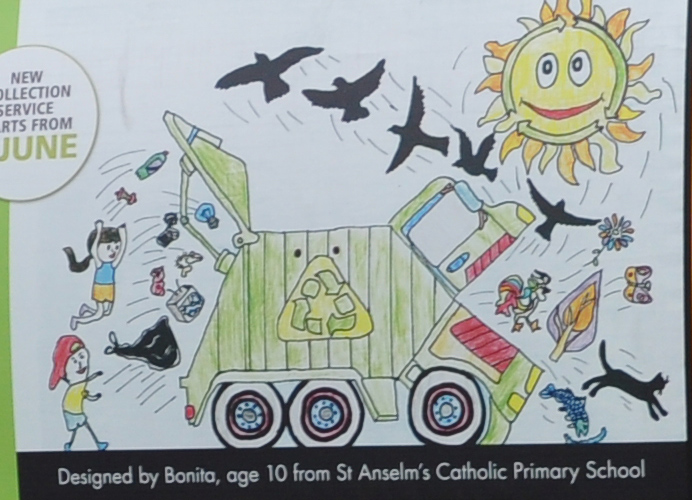 One of the borough’s recycling trucks has had an artistic makeover using eye-catching designs by local schoolchildren – including this one by 10-year-old Bonita Arzoz.

At the start of the year, Ealing Council ran a competition for primary and high school students asking them to design a picture for the two sides of a recycling truck that would inspire residents to recycle more.

Entries were received from across the borough and the winners had the chance to see their creations in person on Monday, 25 April when the truck visited their schools and prizes were given out to the young artists and to the schools.

One side of the truck is decorated with the winner chosen from entries by secondary school pupils; and the other side selected from pictures submitted by primary school children.

In the secondary category there were four joint winners, all from William Perkin High School, Greenford. Ivy French, Maisie Hall, Maggie Shopova and George French (all aged 13) worked together to produce a future-scape that represented their ‘recycled world’. Everything in the work is made from recycled things: The buildings are milk bottles and even the birds are made from old T-shirts.

‘The planet is my future and everyone’s in the school…’

Meanwhile, Bonita Arzoz from St Anselms Catholic Primary School, in Southall, won the primary school category after submitting a skilful and colourful design showing why it is important to recycle.

Bonita’s picture shows two children throwing litter into the rear of a recycling truck with good things coming out of the other end.

Bonita said: “The recycling truck is a happy monster that brings joy to the environment by transforming litter and spitting it back as living organisms such as trees, flowers and animals. I came up with the idea for my design by thinking about what a recycling truck does. I thought of all the bad things that we can recycle and that by putting it in the truck it could be recycled and turned into something better. If you do it, the results could be fantastic and it will be helpful and enjoyable.

“I recycle at home and I think it’s important to do it, because it helps our planet and we don’t want to be killing it. The planet is my future and everyone’s in the school. People should recycle, because we only have one Earth; and where would we live if we didn’t have this Earth? It’s a very nice planet and we should keep it clean.”

Bonita’s prize was an Amazon Fire tablet. The four winners from William Perkin High School each received a £25 voucher. In addition, both schools were presented with a cheque for £150 donated by Amey, the council’s environmental services contractor, to be used on books and equipment.

Information on how to recycle more can be found at www.ealing.gov.uk/bins