Home > What happens if there is an illegal encampment? 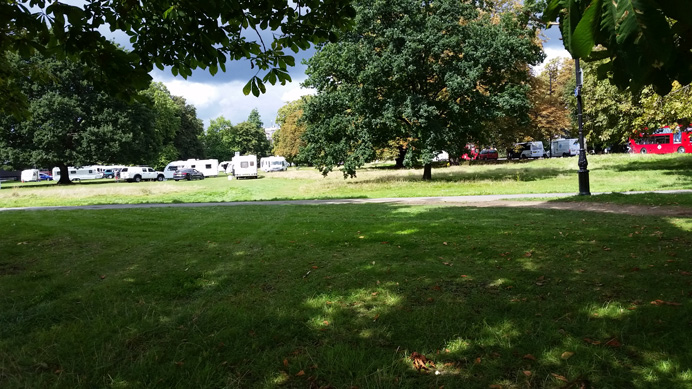 What happens if there is an illegal encampment?

Travellers and gypsies have a long history of living in, and passing through, Ealing, but how can the council respond when unauthorised encampments appear? It is a question often asked.

Gypsy Corner on the A40 is named in recognition of the travelling communities that used to stop at the junction of Horn Lane and the A40 when making their way to and from London. It is a visible reminder of the borough’s history.

There is an official, permanent site for travellers not far from Gypsy Corner, but increasing numbers of unauthorised, temporary sites have been set up on the borough’s green spaces recently – prompting complaints from other members of the public.

When this happens, a team pulling in expertise from across the council responds quickly, alongside local police and the council’s contractors, Parkguard.

Councillor Ranjit Dheer, cabinet member for community services and safety, said he has seen increasing amounts of council resources being devoted to managing the issue over the last year.

He said: “Most travellers are peaceful and law abiding. However, as in all communities, there are those who fail to respect their surroundings, or local residents, or who are intent on criminal behaviour. Indeed, we have had several instances of commercial fly-tipping, with tonnes of waste being dumped illegally.

“Ealing Council must act lawfully and proportionately when any encampment is set up. If we don’t, we open ourselves up to legal challenges, which could mean that it takes even longer to regain possession of the land.

“We must legally carry out education, health and welfare checks on the encampment’s residents and we aim to do this within 24 hours of being notified.

“The encampment is always asked to leave in the first instance. If they refuse, then they are issued with a warning around the behaviour expected of them and the council will consider how to regain possession of the land. While this is happening, the site will be closely monitored.

“If we do decide to evict, this usually happens quickly. However, with the numbers of encampments increasing in the last year, we share residents’ frustrations at the amount of council and police resources diverted into managing this issue.

“We are often asked why don’t we just put barriers around all of the parks, but we have to balance the needs of all the users of our parks. In Norwood Green, we have installed large earth mounds to make it harder for caravans to drive on to the green, but this isn’t practical or affordable everywhere.

“I would like to see a change in the law to make it easier for the council and other authorities to deal with illegal camping. We have an authorised camping site in the borough for people to use with permanent berths and, as a council, we can ill afford the hundreds of thousands of pounds we have had to spend in evicting several temporary illegal encampments over the past year.”

There are not any official ‘transit sites’ in the borough at present for travelling communities who are ‘passing through’ to use. The London Assembly published a report this year
which concluded: ‘there is not a need for the council to deliver any new transit provision at this time.’ However, it did also recommend the council should continue to monitor the situation, in conjunction with neighbouring boroughs.

Unauthorised encampments should be reported to the council’s safer communities team on 020 8825 5994 or by emailing communitysafety@ealing.gov.uk