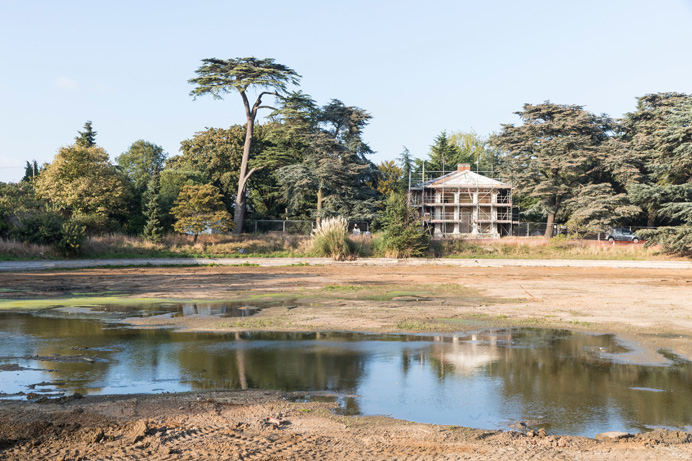 Gunnersbury Park and its many historic buildings have been closed to the general public while a large and complex restoration has been taking place. Many people may have been wondering what has been going on.

It is a multi-million-pound project that will bring the park grounds to life in a way not seen for years, and the museum and other listed structures on the site are receiving significant attention.

Indeed, the site, off Popes Lane in Acton, has been a hive of activity and council leader Julian Bell paid it a visit recently to see how things were progressing at the site, which is jointly owned by Ealing and Hounslow councils.

The freshly reinstated Horseshoe Pond should soon be filled with water; and repairs have started on the Round Pond, which should eventually be restored to its popular old self, when boating was possible on its waters.

A nature trail has been under construction and two artists have been on-site creating timber sculptures using wood from old, fallen trees in the park. The trail will give visitors an opportunity to explore the park’s beautiful grounds in a different way – and guided walks will be available in the future, including ‘mini-beast safaris’ for children to enjoy.

A full-time head gardener has been appointed, who is developing a range of projects in the park with Capel Manor Horticultural College students. A team of garden volunteers meet weekly and they harvested the first crop of fruit and vegetables this autumn from Gunnersbury’s new community garden.

Restoration of the heritage structures dotted across the parkland is in full flow, too. Work has been taking place on the Orangery; the terrace arches; the historic steps behind the bathhouse and at the west viewpoint; and the sham bridges.

A new café and display building for horse-drawn carriages and other historic vehicles belonging to the museum is also starting to take shape, meanwhile.

The large mansion, which houses the museum, is a listed building and needed significant repair. The roof has been receiving attention – including new slate being installed; and some urgent replastering work has been taking place indoors, along with some other preservation and repair.

The museum should reopen towards the end of 2017. Most of the park remains open, meanwhile, and residents can pop down to view some of the restoration work that is taking place from behind safety fencing. Funding for the project has come from Ealing and Hounslow councils, the Heritage Lottery Fund, the Big Lottery Fund and Historic England.

Councillor Bell said: “It was exciting to see how things are coming on and to get a taste of what we can expect when it all fully reopens next year. The parkland and its old structures are being beautifully restored and the museum is of real cultural value to both boroughs. I, for one, am looking forward to welcoming people back.”

WHAT ELSE IS GOING ON?

There is plenty else happening behind the scenes.

Once reopened in late 2017, the museum will allow visitors to find out more about the area’s past, its agricultural roots, industrial heritage and the story of urbanisation. And, in preparation for this, the team there has been working on plans for new displays and exhibitions – and has been running projects involving local people of all ages.

This has included work to digitise the museum’s oral history archive and to collect new material from residents, including a couple who held their wedding reception in the dining room of the large mansion in 1954.

But that is not all. A schools programme has been running sold-out workshops at the site on a diverse range of subjects; a pop-up museum has been touring locations in the borough; and Museum of London Archaeology service (MOLA) supervised an archaeological excavation at Gunnersbury on the north lawn outside the mansions. Schools from Ealing and Hounslow got involved with the dig, and families took part in public workshops. Some finds dated from as far back as the Tudor period; the MOLA team is assessing the finds and is due to report back soon.

To keep in touch with progress on the project at Gunnersbury and to hear about forthcoming events visit www.visitgunnersbury.org or follow @Gunnersbury1 on Twitter or find Gunnersbury Park & Museum on Facebook.