Home > Fishing for carp…in the park 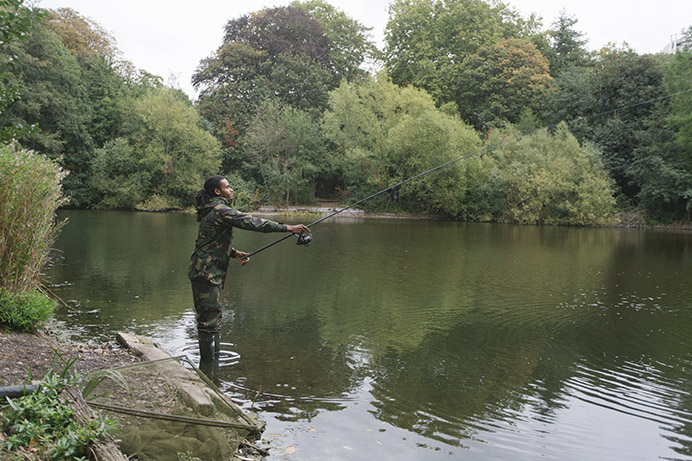 Fishing for carp…in the park

Fishing may not be a pastime you would expect to be able to try your hand at in your local park – but people are being given the opportunity to cast their line at Gunnersbury.

In fact, at 21-feet deep at its centre and well stocked with carp, the Potomac lake is an ideal place to give angling a go.

Darran Mulcahy is the vice-chairman of the Barnes and Mortlake Angling Preservation Society (BMAPS), which has taken a two-year lease to run the lake for fishing. It was originally created by the Rothschild family when they owned Gunnersbury’s houses and grounds.

He said: “Gunnersbury is quite an oasis in the middle of London and you can come down here, chill out, get away from your stresses in life. It is rare; you don’t have many places to do this in London.

“We currently have 45 adult members and will open it up to more people next year once it is fully up and running. We will also start to offer coaching to children.”

Getting it ready as part of sports hub

The angling at Gunnersbury Park is just one element of the new sports hub which is due to open in the early months of 2020.

It will be one of the largest outdoor facilities of its kind in London, boasting a multi-use sports centre and gym, tennis courts, cricket and football pitches – as well as the fishing lake. The sports centre will include five large courts, a 100-station gym, studio spaces, changing rooms and a café.

BMAPS runs two other lakes in London and took over the management of the Gunnersbury lake this summer. Members had to carry out quite a lot of maintenance work to make it suitable for anglers to use.
“When we took it over it was all completely overgrown,” said Darran. “It had been left to nature for about five years, so you can imagine it was quite a task.

“We wanted to bring back fishing here for the local residents. With the development that is going on in the park [see more on this later in the article], we thought it would be quite important.”

One bonus was the thriving population of carp already in the lake, which had been originally introduced by the Rothschilds. “If anything, the lake was overstocked,” said Darran.

‘It is perfect here for local people’

Young angler Harry Farrell appears in the video we made at the lake above. He is a BMAPS member and is taking coaching qualifications with a view to coaching children at the lake in the future.

Darran said: “We still have a lot of work to do, but we are making headway and we hope to open it up to more members in 2020 and then start to offer coaching.

“It is perfect here for local people. With the hustle and bustle of city life, fishing is a good sport to get in to; you can come down and chill out. There is a recent study that has come out about how fishing is good for mental health, and there is a lot of emphasis on that nowadays.”