Home > New arrivals at the zoo include giant rodents 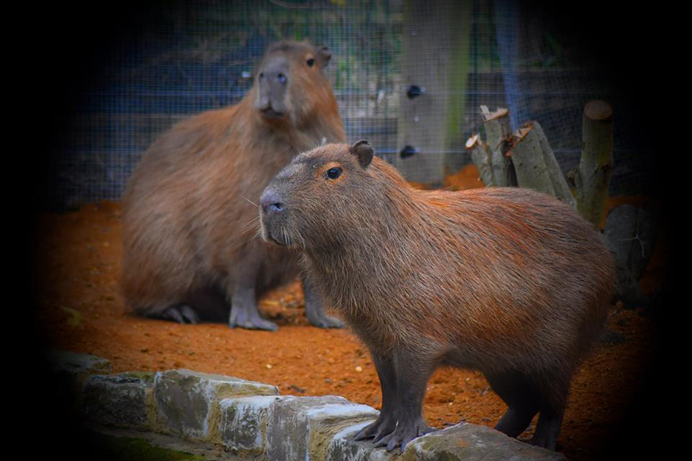 New arrivals at the zoo include giant rodents

A pair of giant rodents have moved into Hanwell Zoo, along with a colourful flock of flamingos.

Hydro and Tupi, who you can see in the picture, are capybaras – the world’s largest rodents.

They have set up home in the zoo’s new South American space, which they share with three mara (the world’s fourth largest rodent) called Lati, Lily and Grace

‘Hydro’ derives from the scientific name Hydrochoerus hydrochaeris, meaning ‘waterpig waterpig’; and Tupi is taken from the Brazilian language from which the name capybara (meaning ‘grass eater’) derives.

Hydro and Tupi came from Peak Wildlfe Park, near Stoke-on-Trent. Capybaras are the largest rodents on the planet, typically weighing up to 70kg and with a length of about 1.2 metres.

Hanwell Zoo had another unusual delivery this spring, with the arrival of 12 flamboyant flamingos.

The flock was provided by Chester Zoo and it has taken up residence in the Caribbean area of the zoo. This space is dedicated to conserving wetland species, and highlighting the plight of endangered wetland habitats around the world.

There are now 42 species at the zoo, with more new additions planned for later in the year. Tamarin monkeys, frilled-neck lizards and alpacas are also due to arrive in the near future.

Meerkats, lemurs, red-crowned cranes, tropical frogs and snakes, pygmy goats and porcupines are among the zoo’s impressive array of creatures.

You can find Hanwell Zoo in Brent Lodge Park (often called the Bunny Park), in Hanwell.