Home > Friars Gardens now a garden for everyone 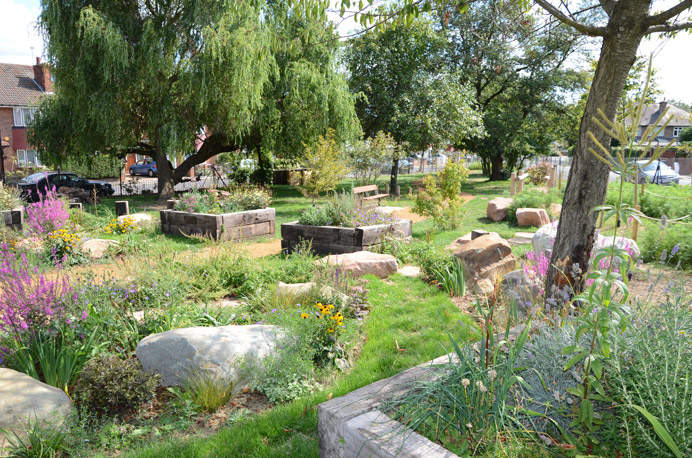 Friars Gardens now a garden for everyone

An ‘unwelcoming’ patch of land with an ‘unwieldy’ gate as its entrance has been transformed into an impressive community garden.

Friars Gardens, a small, triangular green near central Acton, won £45,000 in Ealing Council’s Transform Your Space scheme in 2016 and we visited it at the time. It has since undergone a complete makeover thanks to a team of residents and it was officially opened on 2 September. You can see it in more detail in the video above.

The spot, at the heart of a residential area, was originally part of the Goldsmith’s Estate, along with its sister green St Dunstan’s Garden; and both had been officially designated as public open spaces.

However, the greens only received some basic maintenance and, over the years, became less used.

“Friars Gardens was so unwelcoming,” said Juliet McDonald, founder of Friends of Friars Gardens (FOFGA) and its secretary. “The only entrance was an unwieldy maintenance gate that was so heavy one neighbour cut his hand opening it. So, the green was under-utilised.

“And, without any paths to walk on, the ground was a quagmire of mud. Trees had been lost and not replaced. From a horticultural point of view, it was a sad spectacle. In urban areas such as ours, it is so important to make the most of any green space.”

“It’s not to say that the green hadn’t been loved by locals,” added Kim Rugg, co-founder of FOFGA and its chair. “In recent years, it has always been used by those exercising dogs, but the enjoyment was limited to a single group of users. A number of us felt that the green should be shared by all the community.”

In their efforts to improve the green, Juliet and Kim were joined by Juliet’s husband Neal and neighbour David Blakey, both keen gardeners, who helped lobby other residents. The group heard about the council’s Transform Your Space scheme to fund the improvement of local spots and entered a concept for Friars Gardens called ‘Garden for Everyone’. It was one of four projects across the borough to win some funding.

‘The final concept was genius’

And, working hard through the seasons, including in snow and blazing sunshine, FOFGA members planted 10 new species of tree, including birch, cherry and maple trees. Along the boundary fence there are now 30 espalier apple trees, as well as a number of fruit bushes such as tayberries, honeyberries and gooseberries. Three mini-wildflower meadows add colour to the north, west and southern sides of the park.

The design was further developed with the help of council officers.

“We so enjoyed working with them and were absolutely delighted with how they listened so closely to our needs and came up with creative solutions. The final concept was genius,” said Juliet.

Kim agreed: “The adventure trail for kids is cleverly integrated into the planting and the design works on so many different levels. It is a tranquil space, where you can sit on a rock amongst flowers, but at the same time it is also suitable for children to scramble over.”

Previously an area barely used by children, the green is now a popular play space. It is also used by a wide variety of other people, from a man who does sit-ups against a rock to a wheelchair user who heads there for some fresh air.

As part of the Transform Your Space project, the FOFGA team was brought together with a charity called ArtBox, which is based at Hanwell Zoo. It specialises in community arts projects and its artists are creating eye-catching signs for Friars Gardens and an iron-work entrance arch for the main gate.

“It’s very inspiring to work with other local groups and the cross-fertilisation of creative energy has been incredible,” said Juliet. “ArtBox also helped us with our official launch party by providing fun, art-based events for children. Activities included a workshop to create mosaic birdboxes out of glass tessera and the building of a bug hotel by one of Hanwell Zoo’s zookeepers. It’s wonderful to celebrate nature, even at a social event, and even more wonderful that our local green is finally living up to its potential.”

‘What Transform Your Space is all about’

Councillor Mik Sabiers, the council’s cabinet member for environment and highways, said: “This project encapsulates what Transform Your Space is all about – maximising the potential of an underused or unappreciated piece of land, through a combination of community partnerships, residents’ hard work and council funding and support. By harnessing these resources, the Friends of Friars Gardens have created an attractive and welcoming place the whole community can enjoy. If you have an idea for transforming a spot near you, why not look into the prospect of turning it into a reality? Find out more about the process of applying for funding in the next Transform Your Space round – it could be the start of something small turning into something big.”

For more information about Friends of Friars Gardens, email friarsgardensW3@gmail.com

For more information on Transform Your Space, visit the Bubble community website.