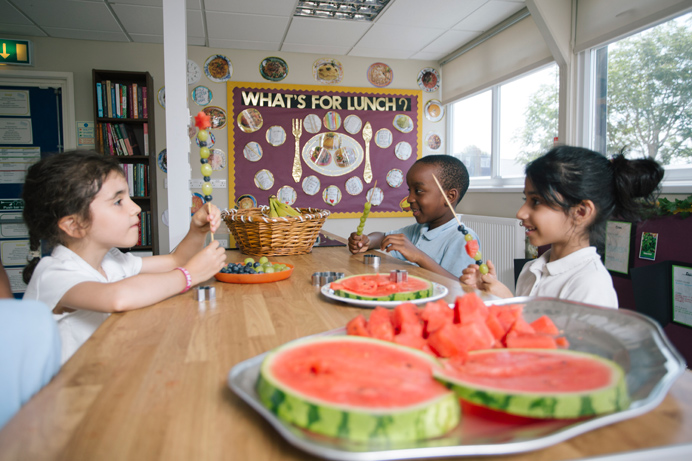 Fresh start at Stanhope, where pupils’ health is miles better

Obesity rates in Ealing are higher than the London and England averages. One school in particular was struggling with the issue, but now things could not be more different.

Stanhope Primary School in Greenford used to have the worst rates in the borough for overweight or obese pupils. In fact, 54% of the children weighed and measured in reception year at Stanhope were once classified as overweight or obese.

Yet those same children, when weighed and measured again recently in Year 6, showed a 22% reduction. So, what happened?

THINKING ON THEIR FEET

From 2015, health became part of the school’s core curriculum. This meant that physical activity, healthy eating and all aspects of living a healthy life became part of everyday teaching. Stanhope was the first school in Ealing to introduce the ‘daily mile’. Come rain or shine, every pupil must run, jog, walk or skip a mile-long track at some point during every school day. In total, the pupils now rack up about 340 miles each day – the equivalent of 13 marathons.

The school also introduced high intensity interval training, with the children doing star jumps and lunges every day after the morning break.

Food policies were reviewed at the school, as well. It introduced a water-only rule for drinks with packed lunches or school meals; and tokens were given out each lunchtime by pupil ‘health champions’ to reward those eating salad, vegetables or fruit – and no junk food.

These tokens are then posted by the children into boxes labelled by year group – a bit like house points at Hogwarts – and, at the end of every half-term, the year with the most tokens receives an afternoon of sport games.

The school recently opened a new kitchen, which was donated by Magnet. This allows the children to learn how to prepare and cook healthy food. They will soon be able to use eggs laid by the school’s new chickens in an area that will become an ‘edible garden’ where the children can help grow vegetables and herbs.

Like a lot of kitchens, the one at Stanhope has lots of recipe books, but many were actually designed and written by the children themselves, for the grand opening by famous chef Cyrus Todiwala.

Headteacher Sahreen Siddiqui said: “For three years in a row Stanhope had the highest number of overweight and obese children in Ealing and we decided to break the cycle. We are really pleased with the results.

“We want to inspire the children to be the healthiest they can be.

“There are lots of exciting plans ahead and with this new kitchen there’s more scope for what we can do. Because of it we recently became the first school in Ealing to be officially adopted by The Royal Academy of Culinary Arts’ Adopta- School programme and there is talk of us becoming a beacon school for the local area to show other schools what we’re doing here.”

She added that the school plans to work with the council and local traders to improve the range of healthy food options available from retailers in Greenford’s town centre.

Councillor Binda Rai, the council’s cabinet member for children and young people, said: “The changes at Stanhope, with the help of the council’s health improvement team, have been a tremendous success and the school is a shining example of what can be done.”