Home > Foodbank providing lifeline to those in crisis 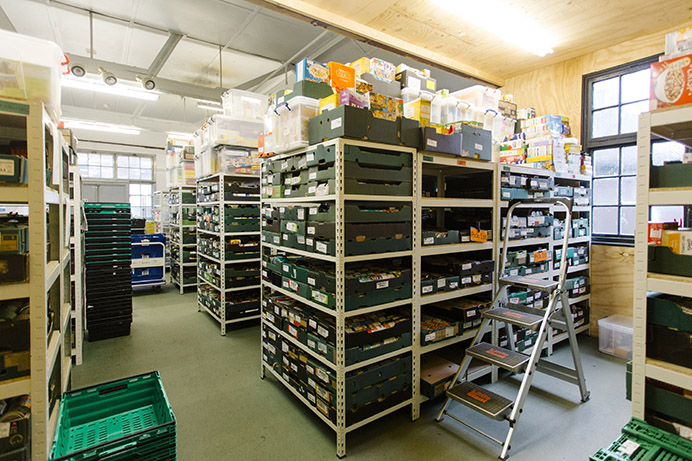 Foodbank providing lifeline to those in crisis

“We don’t think anyone in our community should have to face going hungry,” said the manager of the local foodbank offering emergency food and support to people in crisis.

Ealing Foodbank is a registered charity run by volunteers and three part-time employees. It has centres in Acton, Hanwell, Northolt, Southall and two in Greenford; with another due to open in Ealing Broadway in February.

Janet Fletcher is its manager. She used to be administrator of the charity and was part of the steering group that set up Ealing Foodbank in 2013.

She said: “People walk in with their head down and their shoulders slumped. Some even come in and sit down and burst into tears because it’s all been too much.

“But at the foodbank they are treated like a human being, with dignity and respect, and are listened to. And when they leave they look a little more upright – a change is visible.”

You need vouchers to use foodbanks, and to get a voucher you need to be referred. The most common types of referrals to foodbanks come from job centres and the council’s local welfare assistance service. But Ealing Foodbank actually has more than 200 referral partners, including churches, GPs and even some schools.

It relies not only on volunteers’ hard work, but also on donations of food. Since it was set up in 2013, Ealing Foodbank has received 267,153kgs of food donations. But demand is rising and the foodbank still urgently needs donations to keep up. That is particularly the case in February, when it traditionally has a shortage of stock.

You can even send online shopping to be delivered to the foodbank during its opening hours. The most useful items to donate are products like tinned meat, fish and veg; cereals, UHT milk and fruit juice, rice, dried potato; and tea and coffee.

‘Most people are here for financial reasons’

Adrienne Khan is a caseworker and crisis navigator from West London Equality Centre (WLEC). She is part of the Help Through Crisis service provided by a partnership of WLEC, Ealing Law Centre, Ealing Community and Volunteering Service and Ealing MIND, supporting people at the foodbanks. It is paid for through the Big Lottery Fund.

She said: “We try to find out why they are here and if they need a crisis navigator. We can then provide legal advice and refer them for mental health support, including free counselling, which they often find very helpful.”

Help Through Crisis also provides free courses to help people prepare for employment again once their position is stable.

But why is an increasing number of people having to rely on foodbanks?

“Most people are here for financial reasons,” continued Adrienne. “It is often because they have fallen into arrears with their rent because of the benefit cap and Universal Credit payment delays; and many are facing eviction from their homes.

“In our opinion, the new changes to the benefit system are putting pressure on people to seek employment, even those who are unable to work because of disabilities.  It is now incredibly difficult for them to obtain disability benefits because a majority of the people we help are failing their assessments, even though it is clear to us that they have met the assessment requirements. While they are then being reassessed their benefits are stopped altogether and they are left in limbo without an income. One client has been in this situation for five months and is utterly dependent on foodbanks.

“It is also people who are in low-paid employment who are suffering because of the changes to benefits and high rents in Ealing, with lots of people left with only enough of their wage to barely pay their bills – leaving nothing for living expenses or food. They end up trapped in a cycle of poverty.

“It also penalises people who are not computer literate – some do not have email or easy access to computers, yet they have to go online to fill in claim forms. These people need our help.”

‘I was the lowest I had ever been. It can happen to anybody’

Karen is a volunteer peer mentor working with WLEC alongside Adrienne, who has been through what other foodbank clients have been through. Previously, Karen had lived a comfortable life and was even a volunteer helping at the foodbank. But, suddenly, her life changed and she found herself needing the help of the foodbank to survive when she became a single mother looking after her son, and, after being evicted from her home, living in bed and breakfast accommodation the council had to find for her.

Karen said: “I was the lowest I had ever been. I was going through a divorce as well.

“I had already volunteered at the foodbank in the past but now I was on the other side of the fence and needing to use it. And it shows it can happen to anybody.

“The foodbank and WLEC have helped me a lot – in fact, they are still helping now and I want to give something back.

“I have been there myself and it helps that there are people here who have experienced it and can draw from their own experience.

“You’re made welcome here and are not judged. It is so important, especially from a mental aspect, to realise the foodbank is here and it is OK to come here. It is easy to become isolated but the foodbank is a refuge. It was a glimmer of positivity in my day.

“It really helps to have someone to talk with, or to sit and say a prayer with. It becomes a hub for you – and it allows you to rediscover your confidence in other people, and to understand there is nothing to be ashamed of. These are barriers that need to be broken.”

‘It is amazing to see a genuine difference being made’

Manager Janet explained a bit more about how the foodbank came to be and how it operates.

“I was part of the Ealing Churches Winter Night Shelter when the idea was first raised of setting up a foodbank because the need was clearly there for one,” said Janet. “Around 40 local churches got involved and the steering group was formed and we decided to follow the Trussell Trust model for the new foodbank, which means we are part of a nationwide network of foodbanks supported by the trust.”

“My personal motivation was wanting to do something,” Janet explained. “I took the view that being one person is too tiny but if people do what they can together – and it might only be one hour of time volunteering or one basket of food – it really adds up to make a huge difference; and everyone doing something together has an amazing impact.

“I approached this from a Christian faith background, and this is a way of putting my faith into action. It is amazing to see a genuine difference being made to people’s lives.”

Janet showed us a weekly ‘picklist’ – a selection of the ‘share’ of goods each person or family can take away. It equates to three days’ worth of three meals per day, which is the equivalent of around £70-£80 of food for a family of five or more. They can come once a week, with a voucher.

We went to the storage warehouse, where impressively stacked shelves of packs and tins of produce lined the walls, overseen by warehouse co-ordinator Hilary Padmore, a part-time employee working hard behind the scenes.

Many people also needing to use soup kitchens

Adrienne of WLEC added: “People can come here multiple times in the year but not more than once a week, so they can get food for about three days in each week. We then direct those people who need it to the local soup kitchens so they can have something hot to eat on other days of the week, but also to help avoid isolation.

“So often now, even people with children are going to soup kitchens; and it’s not just the homeless – people who are in jobs but are struggling to pay for much more than their rent go there too.

“These people are often incredibly isolated and can sometimes travel a long way to get to foodbanks or soup kitchens.

“It’s so sad, but people have to rely on soup kitchens to fill the gap and it is putting pressure on those places, too.”

You can find a list of local soup kitchens at the bottom of this article.

The foodbank is always looking for new volunteers – particularly at its Northolt and Southall branches.

To find out more about how the council’s local welfare assistance team might be able to help you, go to the ‘health and adult social care’ section of the council website www.ealing.gov.uk or call 020 8825 6237.

Advice relating to housing or benefits is also available if you drop into Advice Plus every Wednesday between 10am-2pm at the Lido Centre, in Mattock Lane, Ealing. Alternatively, you can call Ealing Advice Service on 03000 12 54 64 and make an appointment to see an advisor.