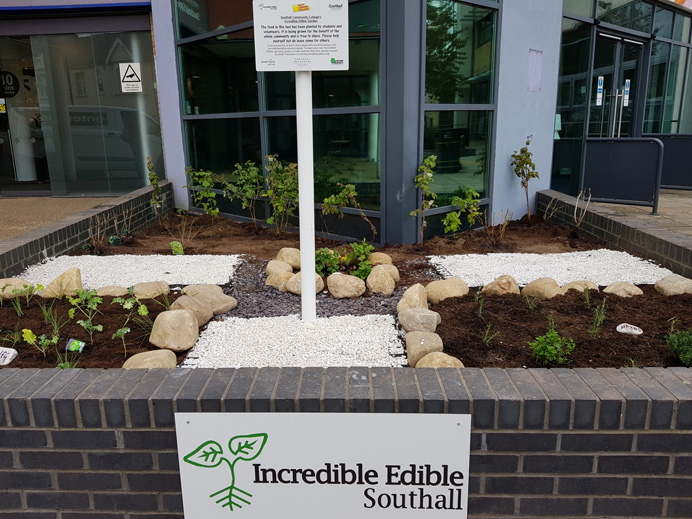 This is the first roadside edible garden in Southall and was planted by a group of volunteers in Beaconsfield Road.

Once the plants have established, the garden will provide free food for the community to enjoy. The volunteers cleared litter and undergrowth and then planted the beds, before a plaque was unveiled. It is hoped it will be the first of many such gardens in the town. Others have been created elsewhere in the borough.

Creating the edible garden had a secondary purpose – namely, clearing up an overgrown piece of land in front of Southall Community College and Southall Sports Centre, which had become a magnet for fly-tipping, vermin and litter.

It was a partnership between Berkeley Group, environmental charity Southall Transition, West London’s College and Everyone Active (which manages the sports centre on behalf of Ealing Council); and the council’s community website Bubble helped by  calling for volunteers from the public to get involved. Ealing Police and its cadets also took part.

Mayor of Ealing, Councillor Simon Woodroofe, opened the garden with Virendra Sharma, MP for Ealing Southall. Councillor Woodroofe said: “I would like to thank everybody who came along to this event. I hope people will latch on to it and support the people who are working on it.”

Mani Dhanda from Southall Transition said: “This is the first garden of its type in Southall and we are hoping people will take inspiration from this. People can start their own gardens like this at home and share them with the community.”

The garden was inspired by the Incredible Edible movement, which originally began in the town of Todmorden in 2007 and has since expanded across the country and around the world.

Southall Transition, meanwhile, has been working on expanding its network of community orchards. We have reported on its previous orchard projects and another is planned for early 2018.