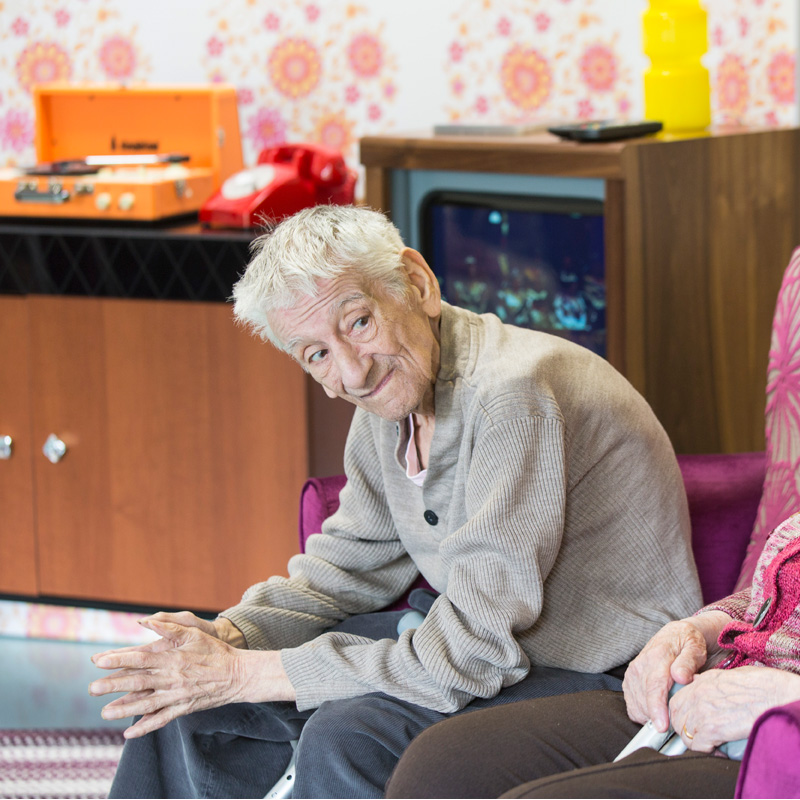 Around 800,000 people have dementia in the UK and around two thirds of these live in the community. Deborah Dickey found out about some of the help available locally.

People with dementia can have a number of symptoms including memory loss, confusion, mood changes and difficulty in communicating. Most people who suffer from dementia are elderly, but younger people can also be affected.

The world can seem a confusing place to someone with dementia, but the council is offering therapy through the use of a pop-up ‘reminiscence pod’. The pod in the Michael Flanders Centre, Acton, is decorated to look like a 1960s living room.

It is designed to take people back to a time that they remember well and that makes sense to them. The familiar surrounding encourages them to relax and talk about their lives.

A creation of a company called RemPod, which appeared on Dragon’s Den on TV, the pod was obtained in February 2014 by Angela Morris, the council’s head of service for older persons.

Walking into the 1960s memory pod at Michael Flanders is like stepping back in time with its authentic furniture and decorations, and its array of objects – including a 1965 Odeon cinema ticket and a 1960s TV set playing DVDs of news broadcasts from the time.

And it really works, with up to 15 clients attending reminiscence therapy groups every weekday. Not only do these sessions help dementia sufferers, they also give their carers (often their children or spouses) a much-needed break.

Majorie Neaves, has been going to the Michael Flander’s Centre since 2012 and her daughter Lesley Webster has seen first-hand the difference the group makes. Lesley’s mum has vascular dementia and suffers from memory loss and confusion.

Lesley said: “The centre was real a lifeline. We found that going there really perked mum up.

“She gets a lot of confidence from being able to remember things from years ago. When I ask her what she’s done at the centre, she gets frustrated, because she can’t remember, but of course she can recount what happened in the 1960s. That’s when she had her children.”

Lesley is Majorie’s carer and the two days that she spends at the Michael Flanders Centre each week means that Lesley can have a break. She continued: “Sometimes I just want to be on my own and the days she spends at the centre allow me to do that. It helps to know that she’s going someone where that she enjoys. It stimulates her and she’s cheerful. The centre suits her.”

Patricia Hayward is manager at Michael Flanders Centre and has worked there for 21 years. She said that the individuals who benefit from the memory pods have various types of dementia – such as Alzheimer’s, vascular dementia and Korsakoff’s.

She said: “Someone might be having a bad day and be struggling to remember things in the ‘here and now’, which can make them anxious and unsettled.

“In these situations a visit to the memory pod room can be very beneficial with helping the individual to remember occurances in their past. Individuals find the pods a safe and familiar environment and very therapeutic – in fact, the music is an excellent way of relaxing them.

“It is something to focus on, and the stories and objects from the period help spark memories and discussions. It aids their memory, engages them and encourages interaction. They share experiences, in particular their life experiences, which all help to emphasise how they are still unique individuals – rather than being generically labelled as dementia sufferers, which is how they may sometimes feel in everyday situations.

“We use the newscasts, music and quizzes as a mechanism to get them to talk. It is very calming and a great form of social inclusion. They often tell us how much difference it has made to them.

“Of course, the time they spend with us also provides respite to their carers and families.”

People with dementia, and their friends and families, can go along to one of the three regular dementia cafes that run in the borough. They are a great opportunity to share experiences, find out about local services and relax in a friendly and welcoming environment.

The council is also working with the charity Dementia Friends to raise awareness of the condition. Staff are encouraged to become ‘dementia friends’ and pass on their knowledge to other people so that dementia sufferers are treated with patience and respect.

The council’s repairs and adaptations service adapts hundreds of properties in the borough every year for disabled people following a recommendation from social services. It also runs a handyperson scheme that carries out minor works across all types of properties whether it is privately owned, belonging to a housing association or rented. Many customers have dementia and referrals are received from organisations such as Alzheimer’s Concern Ealing. Anyone living in the borough aged over 60 and not working qualifies for this free service, as does anyone who is disabled. Contact 020 8825 6070 (option one for handyperson, option two to speak to someone), or email HandyPersonReferrals@ealing.gov.uk