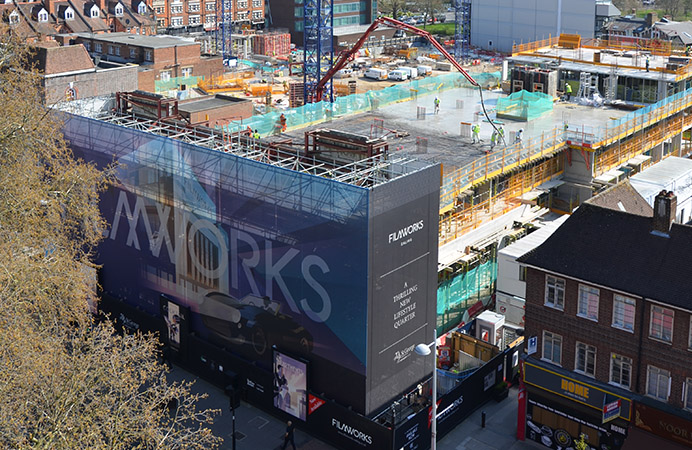 Several regeneration projects in the heart of Ealing town centre promise to continue a transformation that started with the almost completed Dickens Yard complex of homes, shops, restaurants and a public square.

The projects that matter most to residents include transforming the old cinema site into an eight-screen cinema, plus shops and much-needed new homes; and finding other ways of adding more housing in the area – including through the regeneration of Ealing Council’s head office Perceval House.

Council leader Julian Bell said: “Both of these plans include much needed genuinely affordable homes for our town centre, supporting our pledge of 2,500 new homes. At no cost to the council, they would also provide us with a modern, new customer service centre and library, and a smaller office block for council workers that will be cheaper to maintain and run. Importantly, at long last, we will also have our cinema back in Ealing – something so many of us have been working for, and wishing for, for so long.”

Adding to this is the planned renovation of Ealing Town Hall to include a hotel, restaurant, community event space and bar in the west wing while keeping its civic functions in the east wing.

Councillor Bell said: “Ealing Town Hall is loved by local people. That is why any plans would have to preserve it as the civic heart of the borough for future generations. Mastcraft has a track record in restoring and converting historic buildings into high quality hotels.

“Our borough has been recognised for its economic and regeneration potential. Rightly so, because there is so much going on. The eventual arrival of Crossrail will make the area even better connected and help us to continue to attract more investment and jobs.”

Ealing’s new cinema is on its way along with more than 200 homes.

Construction of the highly-anticipated Filmworks is being carried out by St George and it is due to open in summer 2021.

The site of the former 1930s Forum Theatre, Filmworks celebrates Ealing’s cinematic history with careful restoration of the cinema’s original façade and by naming new buildings after famous actors who trod the boards at nearby Ealing Studios.

Filmworks will be set around a new public square with an array of shops, restaurants and bars, and a Picturehouse cinema that will have eight screens and more than 1,000 seats.

It will also include 209 new homes (of which 43 will be affordable) and new pedestrian links to Walpole Park, Pitzhanger Manor and Ealing Green.

It would see an extensive refurbishment of the building by Mastcraft, preserving the Victoria Hall and council chamber.

The east wing of the building would be retained by the council for civic use and marriage ceremonies, with the centre of the building and part of the west wing transformed into a high-quality hotel, with a bar and restaurant. Rooms would remain available for public hire, including a community-use discount for local groups during off-peak periods that mirrors current arrangements.

The proposed work is subject to approval from the Charity Commission and, should this be given, it will then still be subject to planning permission.

If the plan goes ahead, the council would continue to own the freehold of the site and Mastcraft granted a long lease. The building would be expected to reopen in summer 2021, with Mastcraft responsible for the ongoing external maintenance and repair costs of the whole building and internal costs for the hotel.

This project would transform the council’s head office in Ealing’s town centre and also bring a new library, shops and homes.

Galliford Try Partnerships and the council signed agreements on the concept earlier this year.

Consultations on the proposals will take place before a planning application is submitted later this year.

Subject to planning permission, construction would start in spring 2021 with the first phase of residential blocks completed in late 2022.

A new council office block (much smaller than the current one) would be completed a year later, along with a new library and customer services centre. The second and third phases of residential blocks would be completed in April 2026 and late 2027, respectively.

Half of the 470 new homes would be classed as affordable or genuinely affordable.