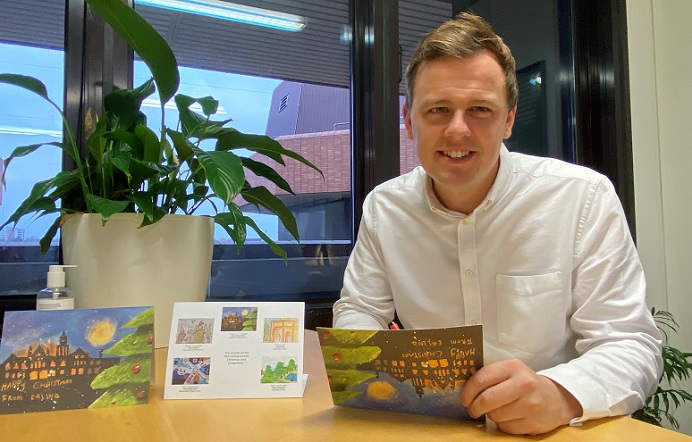 The results are in, the judging has taken place and organisations and people across the borough are receiving beautiful Christmas cards designed by young people in the borough.

Back in November the leader of the council, Peter Mason, launched a Christmas card competition for all children at schools in Ealing. Out of all the entries received, a winner from each of the three age categories was chosen and an overall winner picked from those.

And the winners are:

There were two highly commended entries from:

After much deliberation, the judges chose Alice Allsop-Elliott as their overall winner.

The judges were so impressed with the three winners and two highly commended that they decided Alice’s design, as the overall winning entry, should be the front cover of the borough’s Christmas card, but the other designs will feature on the inside.

When told she had won, Alice said: “I’m really happy to have won the competition. I love art and Christmas, so this was a good competition for me! I can’t wait to the see the card printed. Happy Christmas everyone!”

Councillor Mason commented: “As this year’s Christmas card competition so wonderfully demonstrates, the young people of Ealing are budding artists and creatives of the future.

“We were so impressed with the joyful scenes of Christmas being celebrated across the borough that we have incorporated all the winning designs into this year’s card.

“Congratulations to the winners, and to everyone who put pen, paint and ink to paper.”

Yasmin and Dacian of Sybil Elgar School, are both nonverbal students. Yasmin used pictures when she heard she had won, saying: “Happy and excited.”

Dacian used Makaton signs to express his feelings, saying: “I am happy and proud of my artwork with Northala Hills.”

Mason’s mother said they were thrilled Mason won, and Mason said: “I am so happy my picture won. I really love drawing. I drew the Gruffalo because visiting the Gruffalo trail is lots of fun!”