Home > Lighting the way to Christmas 2018 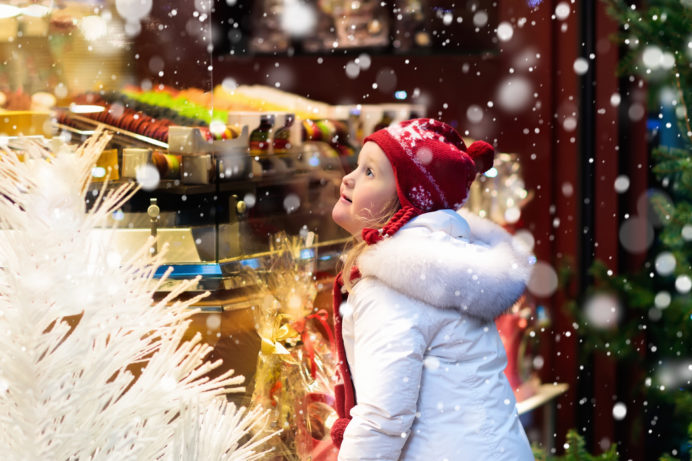 Lighting the way to Christmas 2018

Festive lights have now been turned on, while fairs and markets around the borough will give you a sparkling array of gift options and tasty food and Santa will inevitably make an appearance (or two).

The lights on a Christmas tree were switched on at 5pm in central Ealing this Saturday (24 November) by pupils from Christ the Saviour Church of England Primary School, which is next to Dickens Yard. The children were helped by TV and radio presenter Angellica Bell, also the winner of 2017 Celebrity MasterChef. The tree is in the new Elizabeth Square, the public square between the new Dickens Yard development (built by St George) and Christ the Saviour Church. As you can read further on in this article, Ealing Artisan Market also took place in the square, as it will be every Saturday until Christmas. Meanwhile, Ealing Broadway ward residents, led by Councillor Seema Kumar, hosted a silent auction of heritage street signs, with all proceeds going to Ealing Street Pastors and Ealing Soup Kitchen.

There will be plenty else on your doorstep this festive season. Here we set out just a taste of what you might be able to find.

On Sunday (25 November) the Pitshanger Lane Light up the Lane event returned, with its usual mixture of community-organised entertainment, shopping opportunities, food, craft stalls, choirs and much more.

Ealing Broadway Shopping Centre is due to have a festive display again. Last year, it had an ice cave installation with gingerbread replicas of Ealing landmarks so we wait to see what will appear this year. Choirs will be performing at the shopping centre on 8 and 13 December, too.

The popular Ealing Christmas Market is back at the centre, too, for its third year. This year’s market will run from this Wednesday (21 November) to 24 December, promising ‘traditional wooden cabins, festoon lights and garlands’ decorating the central square and offering a selection of stalls, street food and traditional Christmas goods.

On Saturday, 1 December, the weekly Ealing Artisan Market will play host to a Small Business Saturday Market from 11am – as part of the annual, national campaign aimed at encouraging people to shop locally and support their local economy on one of the busiest shopping days of the year, the first Saturday in December. At the market, held in the new public square (Elizabeth Square) between Dickens Yard and Christ the Saviour Church, you can expect to find seasonal ingredients, carol singers and mulled wine to sip while you shop from local makers and designers. The market is held every Saturday and is run by Eat Me Drink Me.

In fact, many small businesses across the borough take part in the day by hosting events and offering discounts, so keep an eye on shops nearby on 1 December.

Chiswick Park Events Plaza (close to Acton Town and Chiswick Park Tube stations and South Acton rail station) is being taken over by a ‘Festive Fayre’. A selection of local traders will have stalls selling festive food, classic decorations, arts and crafts and other gifts. There will also be a fairground ride and the event is free to attend and open to everyone. It will be open Thursday, 6 December 12noon–2pm and 5-7pm; and Friday, 7 December 12noon-2pm.

On 8 December from 12noon there will be a Christmas fair in West Ealing, centred on Melbourne Avenue. As well as music, choirs, a nativity play, crafts and other family fun, Father Christmas will also be popping by.

Acton Street market, meanwhile, is sure to take on a seasonal flavour. It opens every Wednesday, Thursday, Friday and Saturday between 9am-5.30pm in The Mount, outside Morrisons.

If you are holding a Christmas or winter event, why not submit it to be listed free of charge on the council’s online What’s On pages?