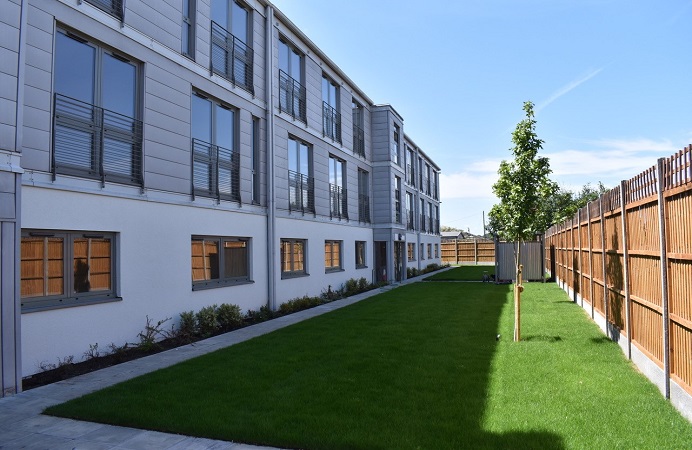 Ealing Council has finished work to relocate and refurbish a set of modular apartments from Southwark to Hanwell. Chris Payne House will provide high-quality temporary accommodation for 16 local homeless households.

Named in tribute to the former Ealing councillor who died in 2014, the building has replaced derelict garages behind existing council properties on Lambourn Close.

The council has modified the layout to create two much-needed four-bedroom family apartments, as well as fourteen one or two-beds. Each flat now has a new oven, cooker and white goods – part of a comprehensive refurbishment throughout the building.

The new flats at Chris Payne House will be rented to homeless Ealing residents while they look for a permanent home. The first tenants are expected to move in from 23 June.

The council purchased the flats – purpose built as housing – for just £110,000. It has invested a further £2.47 million in moving, reassembling and renovating them. The flats will deliver a saving of around £125,000 a year for the council by removing the need for expensive bed and breakfast accommodation for the 16 households that move in. Rental income from the properties will total around £214,000 a year. That means that the scheme will pay for itself in just over eight years.

As part of the project, solar panels have been installed on the roofs of the adjacent buildings on Lambourn Close. This is designed to contribute towards the Mayor of London’s zero carbon target by generating sustainably sourced electricity to sell to the National Grid.

By reusing an existing structure, the council has also saved the substantial amount of energy and materials that would have otherwise been required to create new homes. Waste reduction is one of the key themes of the council’s work to address the climate and ecological emergency.

“An innovative repurposing of existing homes”

Councillor Peter Mason, lead member for housing, planning and transformation at Ealing Council said: “The affordable housing crisis in London is getting increasingly worse, so we’re exploring all options to keep on top of growing demand. These new flats at Chris Payne House will offer 16 homeless households a safe, comfortable roof over their heads.

“Moving modular buildings is not something that happens often. This is one of the first demounting and remountings of such a structure in London. The ability to do this is beyond the capability of many councils, so we’re lucky to have the necessary skills to deal with a complex operation like this.

“Reusing perfectly good buildings that would otherwise have been scrapped means we’re getting excellent value on our investment. We would expect it to cost at least £4 million to build the same number of residences from scratch. Ealing has a particular need for more temporary accommodation with at least four bedrooms. This innovative re-purposing of existing homes will help us bridge the gap.”