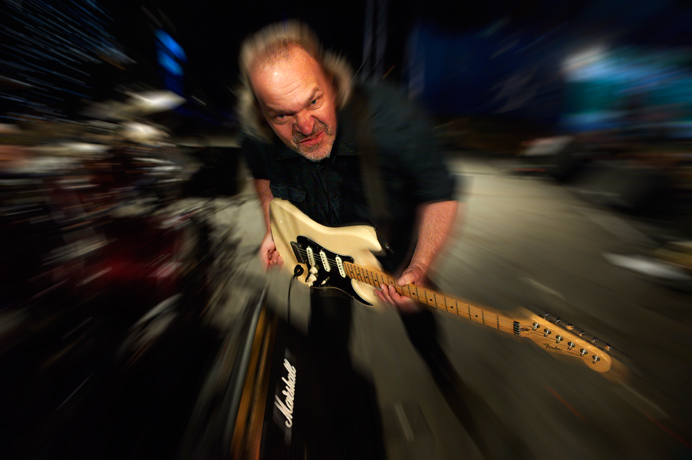 This year, the Ealing Blues Festival will take place on the weekend of 16-17 July. It will be the 30th time the festival has been held. Kathleen Butler profiles its founder and erstwhile programmer, Bob Salmons…AKA Robert Hokum the blues axeman who performs each year (pictured).

To say the Ealing Blues Festival is an established event is an understatement. This became more apparent talking to Bob Salmons, the man who has programmed the event since its inaugural year in 1987 when only around 100 people turned up. It grew to become a cornerstone of Ealing Council’s Ealing Summer Festivals. Bob is fiercely passionate about the importance of the event in showcasing local music but also in uniting diverse groups of people of different ages, something he terms ‘generational synergy.’ It is something that, at the milestone that is 30 Ealing Blues Festivals, has perhaps become most poignant.

Where did it all begin?

Having lived in Ealing since childhood, Bob spent his youth attending gigs at the famous Ealing Club (‘birthplace’ of the Rolling Stones), paid for by money earned from his Saturday job at a local department store. These gigs served as an escape from his tenure at Ealing County Grammar School which, in typical rebellious Blues spirit, he describes as a ‘vile place’. But the school sat on the outskirts of Walpole Park – which was to become central to his life as the site of the first-ever Ealing Blues Festival, as well as its 30th.

There is a deep passion in Bob for both Blues music and Ealing’s musical heritage that presumably stems from how engrained the area and the music is in his life. He was born into post-war Britain, a time of cultural upheaval when the first riffs of what would become Blues rock were being heard through ‘wirelesses’ in dining rooms with rationed portions on the table.

The 1960s were soon to follow and Ealing became the site of a Blues scene that birthed multi-platinum selling superstars such as The Who and The Rolling Stones, but also the Marshall Amplifier which helped notch up the volume and transform rock into the stadium-filling music it is today. By the time he was 16, Bob had witnessed within the confines of a smoky, sweat filled room in Ealing: Otis Redding, Jimi Hendrix and the Stones. Those experiences might help to explain, many years later, his tenacious overcoming of an over-18 age limit to ensure his daughter would be able to see Jack Garratt in Shoreditch.

Tenacity is something that Bob seems to proudly embody, and is what was required to pull off the first ever Blues festival. He also continually preaches the importance of ‘authenticity’ and ‘connection’, using the latter to describe two of his favourite live performers, BB King and Earl Thomas. Thomas played the festival in 2014 and, true to the Salmons benchmark of greatness, served as the only artist he has booked that his daughters asked to be introduced to after making a ‘connection’. Earl Thomas returns to the stage this year.

This nexus of authenticity, connection and tenacity is something that filters into his booking policy, where he cites intuition and good character as the guiding factors to choosing his artists.

Occasionally a light chuckle bodes well for aspiring Blues festival performers, too. Bob describes one particular performer’s application as follows: “Anyone who can write a song called ‘…and I eat pot noodles with a plastic fork’, and have the guts to send it to me as a demo can have a gig.”

Asked about his desert island disk choice, Bob cites Charles Mingus’s Mingus Ah Um as his album of choice, because of its ‘authenticity’ again.

The importance of staying blue

Bob names two years as being the hallmark moments of the Ealing Blues Festival: 1991, when 1,000 people attended the festival; and 2000 when 20,000 attended. The latter year, in particular, illustrated to him the enduring spirit of Ealing Blues because only local acts featured on that particular bill and highlighted the fact that the festival does not need big names to pull in the crowds. It just needs to be in Ealing and feature Blues music.

The low ticket price, something unique to a Blues festival in London, is essential in maintaining a community, and family-friendly, atmosphere and giving locals of all ages an affordable day out.

This brings us full circle back to Bob’s promotion of ‘generational synergy’ and the importance it yields for both the Blues festival and music in general. He has an enduring appreciation for the music being produced by the new generation of Blues performers and an unrivalled concern for the state of the live music industry in Britain.

Bob views Ealing Blues Festival as something he would like to pass on and which, he thinks, could serve as a vehicle to propel the live music scene in Ealing – through fringe events in local pubs and coffee shops. This kind of regrowth in the local live music scene, would serve as a legacy of which Bob said he would feel intensely proud.

You can buy tickets online in advance for the Blues Festival, along with other events at the Ealing Summer Festivals.