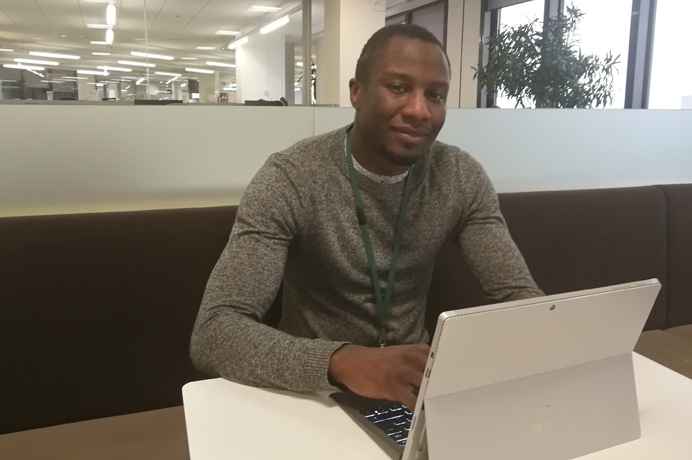 This week (5-9 March) is National Apprenticeship Week and this April the council is looking to take on another group of enthusiastic and motivated apprentices to work with its varied and diverse services as part of its apprenticeship scheme.

Apprentice Shane Elliot (pictured above) works at the council, in the housing department’s repairs and maintenance team.

This involves getting tenants to pay to put right damage they have done to their council property. Since he began his apprenticeship in 2015 Shane has collected more than £60,000 in his role as a voids officer.

He said: “Before starting my apprenticeship I was 21 and in sales for a well-known, pay-weekly retailer but I wasn’t happy. I saw this apprenticeship advert online for Ealing Council. My background was in construction, and I actually studied plumbing. So when the apprenticeship vacancy for a ‘recharge’ officer in the housing department’s repair and maintenance team came up I thought I could do it.”

As part of the scheme, apprentices work towards vocational qualifications while being paid for the work they do.

“It has been an eye-opening experience working in housing, where every day is different from the next,” said Shane. “An apprenticeship at the council is a great opportunity to gain valuable experience and qualifications that you can take to many employers, but it’s also a  journey where you develop and learn about yourself as well learning on the job.”

In 2016 he was awarded Ealing Council’s apprentice of the year, and the London Councils best progressed apprentice.

He said: “In the future, ideally, I’d like to get a permanent job doing what I’m doing now because I do love my job. Or at the very least I’d like to be using all the skills I’ve learned so far.”

Anyone living in Ealing for the past three years, over 16 years of age and not in full-time education can apply for an apprenticeship, whether you are just leaving school, have been working for years, or are seeking to start a new career; there is no upper age limit. Applications are open from 1 April and there is plenty more information available on the council’s website, you can also sign up to our mailing list to receive apprenticeship vacancy updates.

Each year during National Apprenticeship Week Ealing apprentices set themselves a challenge of raising money and awareness for a charity. This year they have chosen Ealing Age UK and activities planned include an internal bake-off, tag rugby tournament and raffle. If you would like to follow the apprentices’ challenge journey or you would like to donate to their cause you can do so on their just giving page.