Home > Plaques part of events to mark anniversary of riot 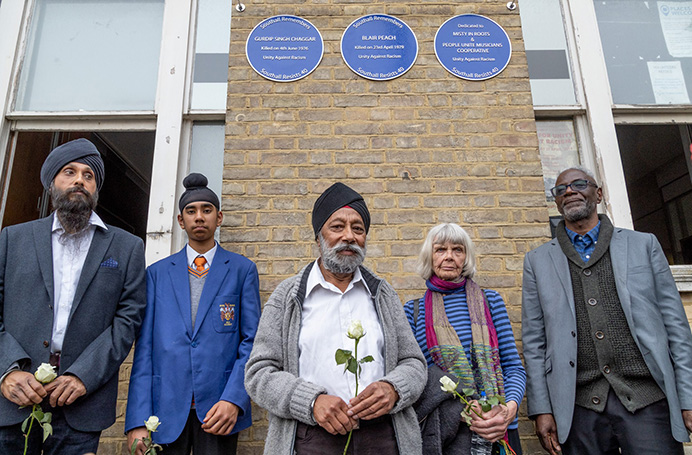 Plaques part of events to mark anniversary of riot

A plaque-unveiling ceremony, a vigil of remembrance and a march for unity were among the events to have taken place recently to mark the 40th anniversary of the 1979 Southall riot.

The multi-media Southall Rising exhibition, which we reported on previously, opened at the Dominion Centre in the town on 23 April – the exact anniversary of the events that unfolded in 1979 – and is open to visitors. It includes artwork by local school pupils and was organised by journalist and Southall resident Vivek Chaudhary.

In 1979, more than 300 people were arrested by police and hundreds more hurt as battles broke out when protestors tried to prevent the far-right, racist National Front party from holding a meeting in Southall Town Hall.

Tragically, a teacher called Blair Peach was killed. He was one of many people from diverse backgrounds who had gathered to protest.

You can read Dr Jonathan Oates’s history article on the events in our history section.

Three commemorative plaques have been put up at Southall Town Hall. One commemorates Blair Peach; but there is also a plaque to Gurdip Singh Chaggar, who was stabbed to death in Southall in 1976 in a racist attack, prompting hundreds to protest in the street; and also a plaque to Misty in Roots, a reggae band from Southall who were at the protest in 1979 and whose manager Clarence Baker was severely beaten by police and badly injured during the unrest.

Mr Baker joined family and friends of the other commemorated men at the plaque unveiling outside Southall Town Hall.

The march for unity took a route through Southall and ended at the town hall.

Other ongoing events are being organised and you can find out more at southallresists40.com

All of the photos used here were taken by local photographer John Sturrock, who kindly allowed us to use them. He was there in 1979 to see the events unfold and returned 40 years later for the unveiling and the march.