Home > A garden for everyone 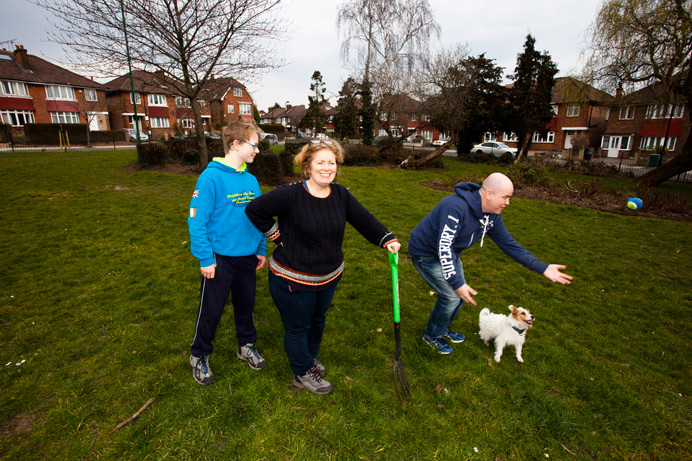 A garden for everyone

“I think the whole community will come together. We’re very excited,” said Kim Rugg, part of the team behind a community garden project in Acton that has been awarded money by the council.

The scheme, called Garden 4 Everyone, will help transform an open space between Friars Gardens and St Dunstan’s Avenue. It has been given £45,000 as part of Ealing Council’s second Transform Your Space initiative. The council asked residents to think big with ideas of how to change neglected and underused spaces into places for the whole community to enjoy.

Of the eight projects submitted, four were selected as winners and awarded some funding, including Garden 4 Everyone. The other three were: The Piggeries Orchard, the Katherine Buchan Meadow, and Transforming Copley Close.

The site in Acton is currently underused but the Garden 4 Everyone group has ambitious plans to open it up and build a natural play area; add new seating and pathways; and plant new trees and wildflowers, which will help wildlife to thrive. The group hopes to get local school children to get involved when they set up ‘bug hotels’, and build bird boxes to hang off the new trees. The group is being supported by the council to set up a management team to oversee the garden.

‘Main thing is to be inclusive’

Kim, who is a member of Friends of Friars Gardens, said: “There are a few

key things we want to do: Make it more accessible by having more than just one entrance; make it child-friendly; and make it dog-friendly because we have a big dog-lover community here who are already playing a big role in looking after it. Also, when it rains, the garden’s ground becomes impassable – it gets waterlogged. We want to address that.

“The main thing is to be inclusive. We want a children’s play area, which would be dog-free. We want some dog training equipment for owners to use to exercise and train their dogs, and act as a focal point for their socialising. And we want the bottom area to become an ornamental garden where everyone can go and relax and chat.

“At the same time, with some intelligent planting we will make sure we respect our neighbours by screening some areas and perhaps shielding some homes from some of the noise of people talking; because, even now, people will sit on the benches chatting until the early evening.

“The changes will not mean hordes of people coming down because this is not a ‘destination’; but we’re quite a big neighbourhood and we want somewhere nice to come together. And we think the further we get with this, the more people will want to get involved. There are enough keen gardeners willing to get stuck in.

“There are a lot of people here with a real attachment and you do not find many places where people lay roots down like this.”

Her son, Ossian O’Sullivan-Rugg loves to play on the green and Kim said that children are key to the plans.

She said: “Some people are scared to send their children outside anywhere these days. We have an amazing opportunity to create somewhere they will feel happy about; a real community hub.”

‘It is a great idea’

Martin Sherry takes his dog Rocky to the area on a daily basis and the social side of things is a big draw for them both – and also for Martin’s wife.

“It is a public park and it has become a bit rundown,” said Martin. “To make it a garden everyone can use is a great idea. It is a community place and could be more and more so. It is an ideal place for kids, too. You get 15 people down here in the summer with dogs and it is very sociable – less so in the winter because the soil is full of clay and it gets saturated at the moment.”