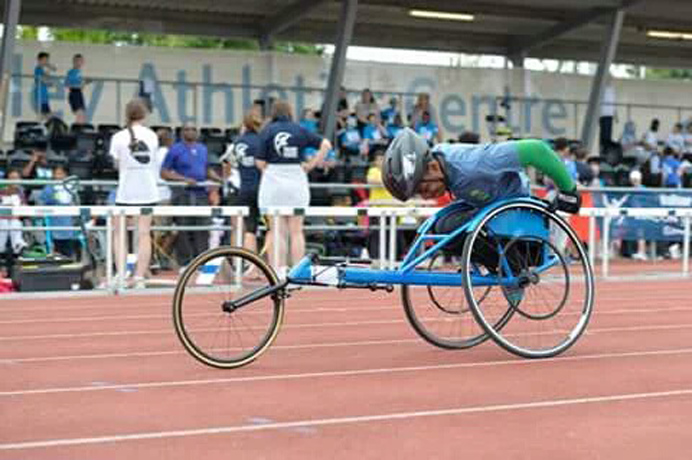 Wheelchair racer called up by country

A Hanwell wheelchair athlete who achieved his dream by being called up to race for Great Britain for the first time has thanked a council scheme for helping him to reach his goal.

Hilmy Shawwal, 19, has been chosen to represent his country at the IWAS (International Wheelchair and Amputee Sports) World Junior Games in Prague this June.

He has Spinal Bifida and competes in the 100m and 200m races in the T54 category, which is for athletes who have partial trunk and leg function.

Throughout most of his school years, from the age of nine, Hilmy competed in various inter-school competitions and sub-regional disability events that were organised and run by Ealing Council’s Active Ealing service with the help of Willow Tree School Sport Partnership. This is where he built his appetite for wheelchair racing.

Hilmy has competed at the London Youth Games Para competitions since 2009 for Team Ealing (which is organised through Active Ealing). His most memorable moments were breaking the 100m record in 2014 – and then breaking his own record the following year, along with the 200m record, too.

In October, Hilmy was nominated for a Spirit of the Games award at the London Youth Games Hall of Fame. He has also now become a member of the Weir Archer Academy, which was set up after London 2012 by the Olympic champion David Weir and his coach Jenny Archer.

‘I have just had the passion for it’

Hilmy said: “I have always wanted to compete in wheelchair racing. I have just had the passion for it ever since I started competing for the borough when I was nine years old and have never looked back since. I have been watching the Paralympics since 2008 which has inspired me; and four years later David Weir, who is also managed by Jenny Archer just like me, went on to the London 2012 Paralympics and managed to get four gold medals.

“Ever since 2012 they have helped inspire me, just like Active Ealing has done throughout my life.”

Christie Moloney co-ordinated the Team Ealing Para squad that Hilmy was part of until he left school last year; and she was one of the people he wanted to thank after hearing the good news about his call-up, along with Active Ealing and his old school Alec Reed Academy.

He said: “All I have ever wanted in my life is to get selected by Team GB and now, in just four months, that dream becomes a reality.

“Active Ealing has helped me become stronger and more focused. I have realised when things bring you down 100 times, you need to get back up 101 times.

“I wanted to take time and thank the people who have helped me so much in my life to get me where I am today. As well as my family and friends I wanted to thank Christie, Ayesha, Danny Edwards, Jo, Active Ealing, Brentford Football Club, Panathlon, Everyone Active, John Chilton School and Alec Reed Academy.”

‘A pleasure to work with’

Christie said: “Hilmy has always been a pleasure to work with as a young person who has represented Ealing over the years and it is fantastic to have been able to watch him develop as a sportsman and as a person. The Active Ealing team is proud of him and his call-up for the national team is well deserved.”

Hilmy is currently studying sports and exercise science at Middlesex University and intends to go into teaching and coaching.

For more information on activities for people with disabilities, visit the sports pages on the council’s website.