Home > Larger than life art in the park 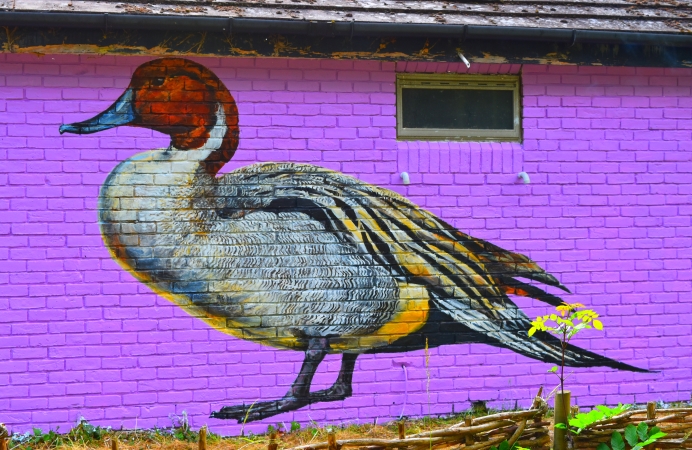 Larger than life art in the park

The snipe, barn owl and great bustard have appeared as larger than life art on walls around the capital, including the animal centre in Hanwell. But where have they come from? Ealing News Extra caught up with the artist who is capturing birds that are vanishing from Britain.

ATM is a London-based street artist whose paintings of rare and endangered British birds are appearing on decaying housing estates, brick walls, railway arches and unglamorous spots around the capital. He has generously also painted two murals at the animal centre, in Hanwell.

“I wanted to paint in the animal centre and celebrate this lovely space because it is such a positive place in so many ways,” he told us. “It provides a refuge from city life and a window into other worlds.

“The animals and birds are kept in beautifully maintained, well-planted enclosures. They give adults and children alike an all-too-rare opportunity to encounter other creatures and observe them in their social interactions. This is especially important in these times of increasing lack of access to the natural world.

“It is an oasis of calm and peace. Being able to listen to the song of African birds in the heart of Hanwell provides something unique and irreplaceable. This is why it is so important that this beautiful place is preserved and supported to continue its vital service to the whole community.”

But why did ATM choose to paint a huge pintail duck and a hawfinch at the animal centre?

“I painted the pintail because it is a rare British breeding species,” he explained. “Though many thousands migrate to spend the winter here. There are pintail, along with other rare species of duck, on the pond at the animal centre.

“I painted the hawfinch because it is such a handsome, yet little-known British bird. Sadly, like so many others, it is declining in numbers, though I was lucky enough to see one last year in a Northfields allotment.

“Hawfinches eat seeds, fruit kernels, buds and shoots, but like all finches also need a ready supply of insects, caterpillars and grubs to feed their chicks in early summer; and raspberries, rose hips and other fruit in autumn.

“This is why it is so important that healthy native plant species are available, to support the insects and provide the fruit, berries and seeds the birds need.”