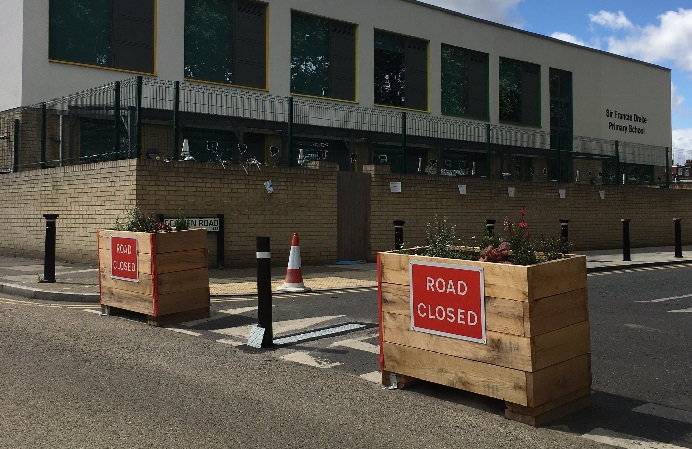 We are seeing a continually slow rise; so, we need to be vigilant and all follow the rules: Wear face coverings, social distance and take a test and self-isolate if we have any symptoms.

Now, as part of our response to COVID-19, we are continuing to implement low traffic neighbourhoods across the borough and you may have seen some of them being put in. With car journeys returning to pre-lockdown levels and low levels of usage and capacity on public transport, its vital that we act quickly to avoid an even greater build-up of traffic in residential areas and to stop a second public health crisis of poor air quality. And we need to make sure that we do everything we can to encourage more people to walk and cycle.

Now, when introduced using experimental traffic orders, there’s a six-month statutory consultation period for residents to give their feedback. In putting in LTN barriers, we have had full consultation with the emergency services and I want to emphasise that. The barriers have retractable bollards in the centre, between planters, leaving sufficient space for emergency vehicles to pass through.

Now, concerns have been raised about whether this is possible at one particular barrier – the Junction Road barrier in South Ealing – and, today, I’ve spoken with the Ealing Fire Station commander, who has visited the site and said there is access to all properties along Junction Road and adjoining roads and there are absolutely no concerns regarding safety to the public.

Can I also, at this point, congratulate all our pupils and teachers on their efforts with their GCSEs – the results were announced this week and we wish them all the best in the next phase of their education, especially given how difficult it’s been with the disruption of COVID.

Finally, on Sunday, 23 August, we will be commemorating Sankofa Day by lighting up the town hall red. The 23 August is an international day of remembrance of the victims of slavery and the transatlantic slave trade. On 23 August 1791, slaves rose up and won their freedom and created the first independent black state under the leadership of former slave Toussaint L’Ouverture, and it’s in present day Haiti and the Dominican Republic.

Now, if you are interested in their story – and it is a harrowing read, I have to say – but it is a classic: CLR James’s The Black Jacobins. I was introduced to this book by my father-in-law who comes from Dominica, not to be confused with the Dominican Republic in the West Indies. But I would recommend to anybody who wants to know about the slave revolt and the setting up of the independent state of Haiti to read this book, and to recognise that that slave uprising led to the abolition of the transatlantic slave trade. And that’s why 23 August is chosen for this date of remembrance.