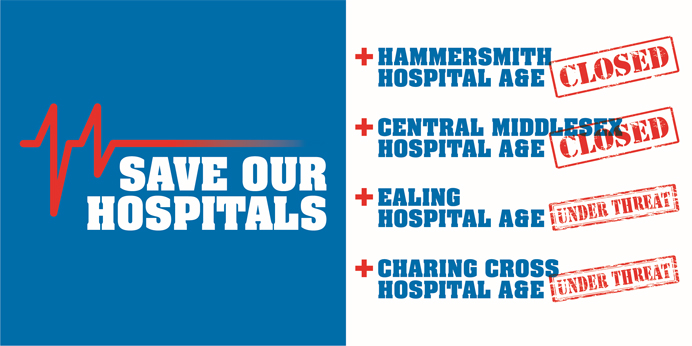 In April, Ealing Council reaffirmed its commitment to campaigning against NHS proposals that would result in
our two most local hospitals, Ealing and Charing Cross, losing a huge number of bed-spaces for patients. We are
determined to fight what amounts to a disaster waiting to happen.

The NHS has confirmed to Ealing Council that its proposals would see the number of beds at Ealing Hospital reduced from 288 to just 50, a cut of more than 80%.

Meanwhile, Charing Cross, in neighbouring Hammersmith and Fulham, would lose 336 of its 360 in-patient beds, a 93% cut.

Our borough has already seen significant reductions in local hospital services by the NHS, including closing the maternity unit and the children’s ward at Ealing Hospital – and there are plans to do the same to its A&E.

With potentially no surgery, no critical care, no acute beds, no emergency ‘blue-light’ ambulances, no maternity unit and no children’s ward, it is unlikely that any resident would be able to recognise what was left as a hospital.

Local hospitals are feeling the strain of cost pressures and a growing population, with all four NHS trusts covering north-west London failing to meet the 95% target for A&E waiting times this winter, with some of the worst waiting time figures in the country. The removal of more clinical services from both Ealing and Charing Cross hospitals will make this situation worse.

A letter on behalf of the council was sent to the Secretary of State for Health, urging the rejection of these changes.

We will continue to do everything we can to save our hospitals and will be planning a public rally. You can help too, so please visit www.ealing.gov.uk/soh for details and sign up for updates.