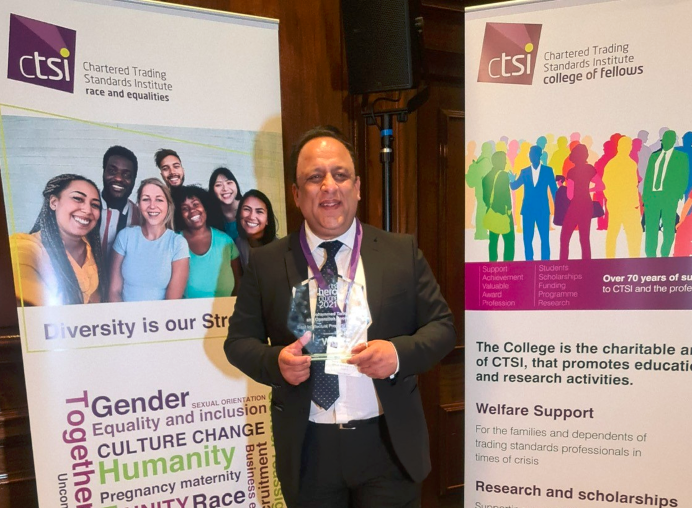 An Ealing Council trading standards officer has received a national award in recognition of his efforts to tackle counterfeiters in the London borough.

Tariq Mohammed has been awarded the Chartered Trading Standards Institute (CTSI) Hero Award 2021 for Intellectual Property and the contribution he has made to protect consumers in Ealing.

The senior trading standards officer has been with Ealing Council since 2004 and is now regarded as a leading specialist in combatting counterfeit goods and piracy in hot spot areas within the borough.

Over the past two decades, Tariq has often faced threats to his own safety when identifying and stopping organised crime networks.

Altogether, Tariq has accumulated 14 awards from the Anti-Counterfeiting Group within the last 15 years and his work has directly led to multiple high profile court cases.

He was recently featured on BBC One’s Defenders UK programme which revealed how counterfeiters are cashing in on COVID-19 by putting public safety at risk with substandard goods such as face masks and hand sanitisers.

The programme revealed that within six months, Ealing’s trading standards team seized half a million suspect face masks and thousands of bottles of sanitiser.

“It’s a major problem not just in our area, in Ealing but nationally with these goods in great demand because of the current COVID-19 situation,” said Tariq.

“Since 2020, we’ve been carrying out various forms of enforcement action on importers, wholesalers and retailers supplying these products, with many masks arriving from the Far East and Asia.

“At first sight you might conclude that the masks are fine but on closer inspection you’ll find they’re just cheap, quality, poor, substandard goods. They come in boxes with a fake CE mark to give the impression that they meet basic European safety standards, so that gives us great cause for concern.”

Dodgy face masks and fake hand sanitisers aren’t the only items that have come under the spotlight of Ealing’s trading standards team. Fake goods such as shoes, clothing, mobile phone accessories, perfumes and erectile dysfunction tablets continue to flood the UK market.

Protecting consumers from counterfeit articles continues to be a priority for the London Borough. The council has recently launched its Good Jobs priority which includes tackling rogue traders and supporting worthy employers to bounce back from the pandemic.

One of the campaign’s key drivers is to work with partners to take harmful products out of circulation in hot spot areas but to support businesses in rebuilding and renewing Ealing’s local economy.

Councillor Bassam Mahfouz, cabinet member for decent living incomes praised Tariq for his commitment to tackling these types of crimes.

“On behalf of Ealing Council, I would like to express my appreciation for the excellent contribution Tariq has made in tackling the criminal network here in London.

“Through his efforts in combatting counterfeit goods, he has been instrumental in protecting Ealing residents by removing face masks and hand sanitizers that can be dangerous and not fit for purpose.

“Some people might conclude that counterfeiting is a victimless crime but consumers should bear in mind that it often funds organised crime groups, modern day slavery and child labour.

“There are a lot of good businesses and traders in Ealing who import and sell genuine products and yet are sadly undermined by counterfeit traders who sell fake goods at low prices.

“We want to protect and nurture good employers here in Ealing and we call on consumers to ensure that they support our campaign by only buying from reputable traders. This supports Ealing Council’s Plan for Good Jobs.

Advice or help with consumer issues is available from the Citizens Advice Consumer Helpline, available online or by calling 03454 040 506. To report any criminal behaviour by businesses, contact the council’s trading standards team by emailing tradingstandards@ealing.gov.uk.