Home > Stuff to do #4: Win movie on our place in rock history 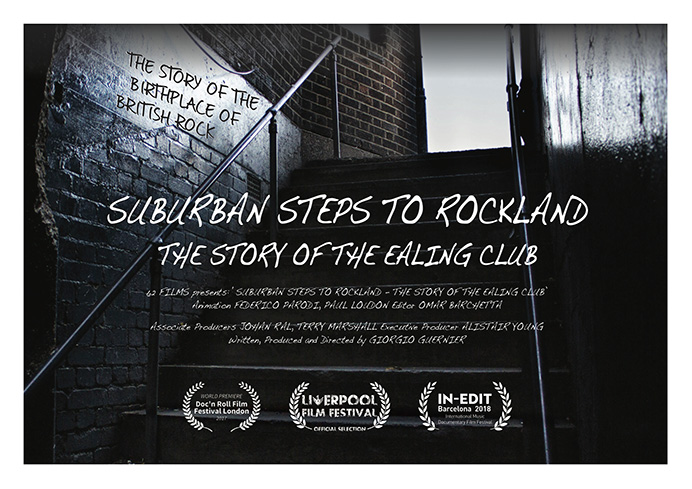 Stuff to do #4: Win movie on our place in rock history

In the fourth of our series of stuff to do at home during the lockdown, we have three copies of a film that tells the amazing tale of how 1960s Ealing earned the label ‘the cradle of British rock music’. And, as we promised, we are giving them all away in a competition.

As well as an impressive soundtrack, Suburban Steps to Rockland features interviews with numerous famous musicians and has an extensive range of video archive footage licensed by award-winning filmmaker Tony Palmer and world-renowned libraries.

The documentary was written, directed and co-produced by film-maker Giorgio Guernier and co-produced by Alistair Young, from the Ealing Club CIC (community interest company). The CIC preserves the heritage of the Ealing Club venue, opposite Ealing Broadway Tube station, that spawned so many legendary acts. Rolling Stones, Cream, Fleetwood Mac and the Jimi Hendrix Experience all owed their formation, or development, at least partially to the club.

The film has been presented at the Barbican, Royal Albert Hall and abroad (including Spain and South America) as part of film festivals, including prestigious ones like the London Doc’n Roll Film Festival and the In-Edit Barcelona, arguably the biggest music documentary-oriented events in Europe. The full film has also been shown several times on the Sky Arts channel, Sky New Zealand and VRT (national Belgian television channel) – and has even been made available on KLM planes’ in-flight entertainment.

It is also now available on DVD – and we have three copies to give away in our competition. See below for more details.

The cradle of rock

In March 1962, Britain’s first rhythm and blues band was advertised in the music press, setting off a scene that featured ‘electric blues guitar, pounding drums, screaming vocals and a bit of harmonica’ as a key feature.

It was at the Ealing Club where Alexis Korner’s Blues Incorporated, featuring Cyril Davies on blues harp (harmonica), inspired dozens of musicians and where the scene kicked off.

As music journalist Bob Harris stated, the club was: “A springboard for many of the great careers we have seen in British music.”

Paul Jones, later of Manfred Mann, explained in the film how he was one of many singers, including Mick Jagger, who would gather in a throng in front of the stage with the aim of catching Korner’s eye and be called up to join in. Korner introduced Jagger and Keith Richards to Brian Jones at the Ealing Club, forming the nucleus of what was to become The Rolling Stones. Eric Clapton would also take part.

“This amazing array of young musicians was hugely into the blues and the Ealing Club was the first place they could actually go to and be able to listen and play ‘their’ music,” said Alistair Young. “Even more remarkable was the way they ended up creating something original themselves and spawning a music scene that became global.”

For more details, you can read our story about how the film came about, and also read our follow-up story from last year about how the team raised money to push the film out to a wider audience. You can view the official trailer in those articles or on YouTube.

Let’s rock: Have a go at the competition

Four people can claim a prize in our competition.

The three main winners of our competition will each receive a Suburban Steps to Rockland DVD and will also each get two limited-edition postcard-sized prints of specially commissioned artwork of famous musicians to have cut their teeth at the Ealing Club. One runner-up will receive an ‘Ealing Cradle of Rock Music’ tea towel and a postcard.

To be in with a chance of winning, you need to correctly answer the following question and email it to aroundealing@ealing.gov.uk by 11.59pm on Sunday, 28 June 2020. Make sure you use the subject line: Music DVD competition or your entry may not be included. Please state your postal address, in case you are a winner. Only the winners will be notified. No alternative prizes are available.

Question: What was the name of the original ‘house band’ at the Ealing Club when it started?

Seen any other useful places for people to check out?

If you have spotted other examples of local ‘virtual culture’, or have created your own, why not send it to us and we might include the best in future updates. Email them to ealinghomeactivities@gmail.com

Read the other stories in the Stuff To Do series