Home > When the Duke of Edinburgh came to visit 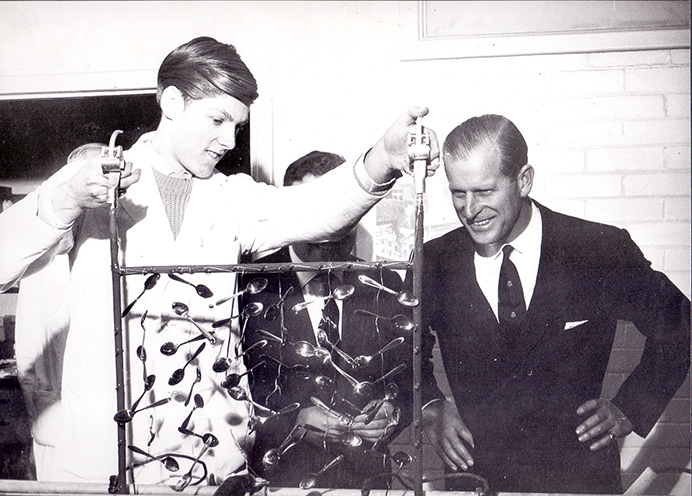 When the Duke of Edinburgh came to visit

To commemorate the late Prince Philip, Duke of Edinburgh, who died last month, we look back at the times he visited the borough – which he did on several occasions, as borough archivist Dr Jonathan Oates explains.

The first visit was on Tuesday 26 November 1957, when he went to the A.E.C. Works, on Windmill Lane, Southall. Arriving at 11am he remained for three hours before leaving on a red double decker Routemaster bus.

Whilst there, ‘he toured the vast factory, spoken to men at work in the many shops and captivated everyone with his charm, thorough questions and his obvious interest’. He saw how the buses were built up to the stage that the body needed to be added. At first he met the chairmen and directors. Then there was an informal tour. However, he often branched off and spoke to the men at work, asking one how he got to work, another how long he had worked there and to another about which union he was a member of.

The latter, Mr Alston, said ‘I found it so easy to talk to him. It was just as though he was one of us’. There was discussion about the effect of automation on the factory and what happened to the men whose machinery did their former work. They were employed elsewhere in the factory. This brought the Duke on to discuss relations between management and unions and was told that discussion was regular. There were also jokes about theatrical performances.

After seeming more of the assembly line, the Duke was asked if he would like to drive a single decker bus, ‘no thank you. It is too cold’ he replied. He did not have the time to see the sales department. He then saw the engine testing centre and the apprentices training school. He talked to some of the latter and asked a worker about the test centre. He was then given lunch and left, ‘as he rode out of the works, to the cheers of the men and women who cut short their lunches to line the route’. There were 4,500 people seeing him off as he went this next destination.

At Royal Vehicles, Park Royal, he saw both the bodies of buses and military equipment being made. ‘As in the morning, he impressed everyone with his knowledge of the materials in use and once more occasionally side-tracked the prepared route to have a chat with workers’.

One such was the chairman of the Works Committee. He left in a limousine after two hours where ‘there was a glow of warmth in the feeling he had left with the people he had come to see at work’.

On Friday 4 November 1960, the Duke visited the Tin Research Institute in Perivale. He visited the laboratories and workshops (pictured top and above).

Apparently, ‘Time and again he asked for a full technical description of the demonstrations and processes he saw, and as one tired member of staff said afterwards “He was simply not interested in the simple layman’s explanation”.

‘Whether it was peering into a microscope, seeing the plating on a simple mincing machine, or a range of cutlery, or whether it was listening to the intricacies of the tin research processes, the Duke wanted to know all the whys and wherefores, revealing his insatiable thirst for knowledge. At the same time he showed an interest in the staff’.

His final known visit was in 1979 when he opened the new wing of an old people’s home, Cecil Court, in Eaton Rise, Ealing.

However, perhaps the late Duke’s more lasting legacy is that many young people have, over the past six decades, have undertaken activities for the Duke of Edinburgh Award scheme.