Home > Was Ealing the ‘Queen of the Suburbs’? 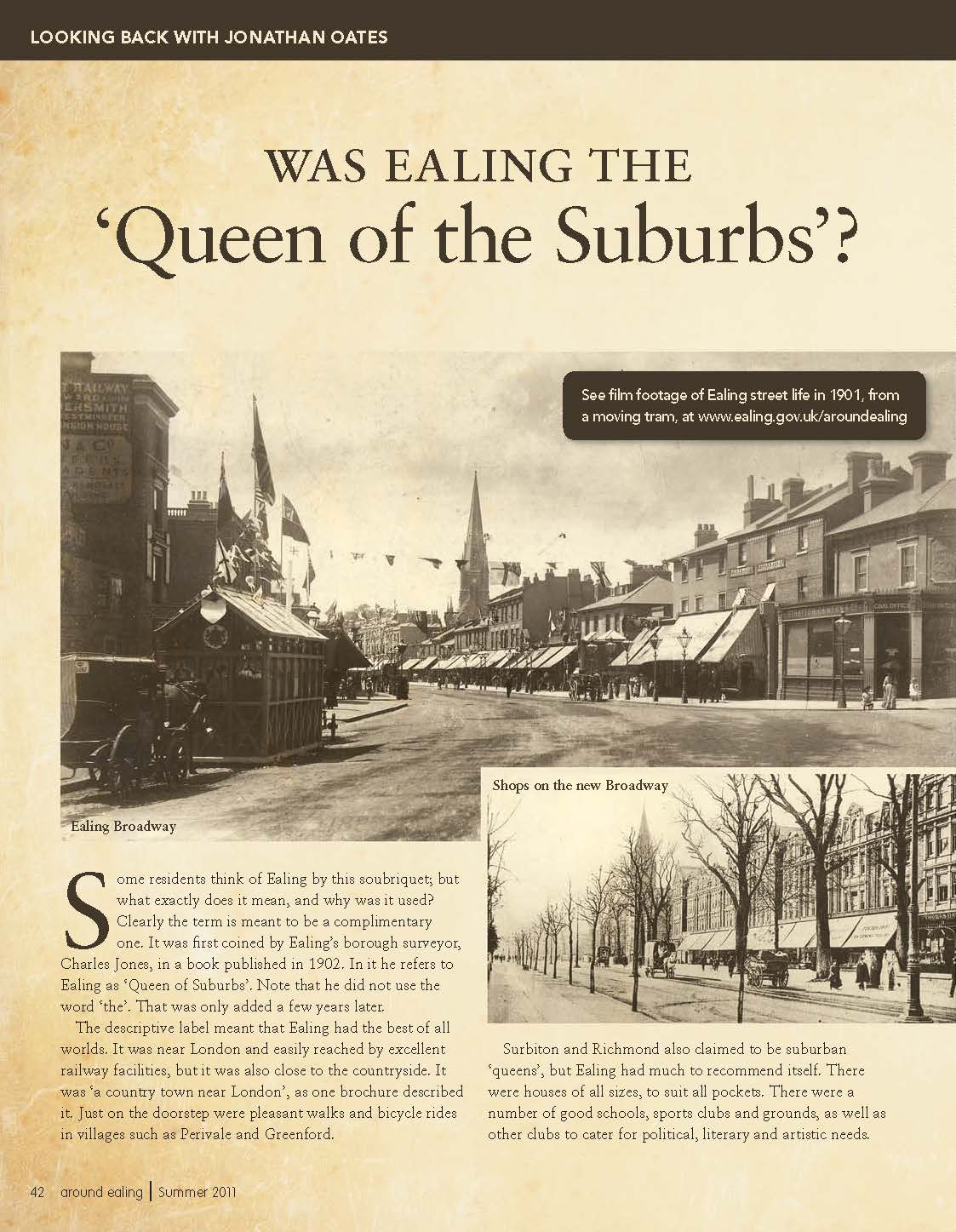 Was Ealing the ‘Queen of the Suburbs’?

Some residents think of Ealing by this soubriquet; but what exactly does it mean, and why was it used?

Clearly the term is meant to be a complimentary one. It was first coined by Ealing’s borough surveyor, Charles Jones, in a book published in 1902. In it he refers to Ealing as ‘Queen of Suburbs’. Note that he did not use the word ‘the’. That was only added a few years later.

The descriptive label meant that Ealing had the best of all worlds. It was near London and easily reached by excellent railway facilities, but it was also close to the countryside. It was ‘a country town near London’, as one brochure described it. Just on the doorstep were pleasant walks and bicycle rides in villages such as Perivale and Greenford.

Surbiton and Richmond also claimed to be suburban ‘queens’, but Ealing had much to recommend itself. There were houses of all sizes, to suit all pockets. There were a number of good schools, sports clubs and grounds, as well as other clubs to cater for political, literary and artistic needs.

The shops were of decent quality and the goods were reasonably priced. Ealing town council’s rates were moderate in relation to those of neighbouring councils. The death rate was one of the lowest in the country. Its roll call of past residents included famous figures such as Henry Fielding, Spencer Perceval and WS Gilbert.

Finally, there were no ‘nuisances’ in the district; no asylums, prisons or magistrates’ courts.

It must be noted that many people had a vested interest in promoting Ealing as such a desirable place to live. Indeed, it also has to be said that the reality in Ealing did not entirely square with the image being presented of a ‘Golden Age’.

A lodger shot his landlady dead in west Ealing in 1912 and there were common cases of theft, drunkenness and begging being heard at Brentford Court.

Yet, shopkeepers and estate agents naturally wanted to sell their wares, and wanted to emphasise the town’s attractions; and the council adopted the phrase ‘the Queen of the Suburbs’ in promotional booklets in the 1920s.

The term stuck. It was still being used by estate agents in the 1960s, and official literature still used the term in 1980.

This originally appeared in Around Ealing summer 2011