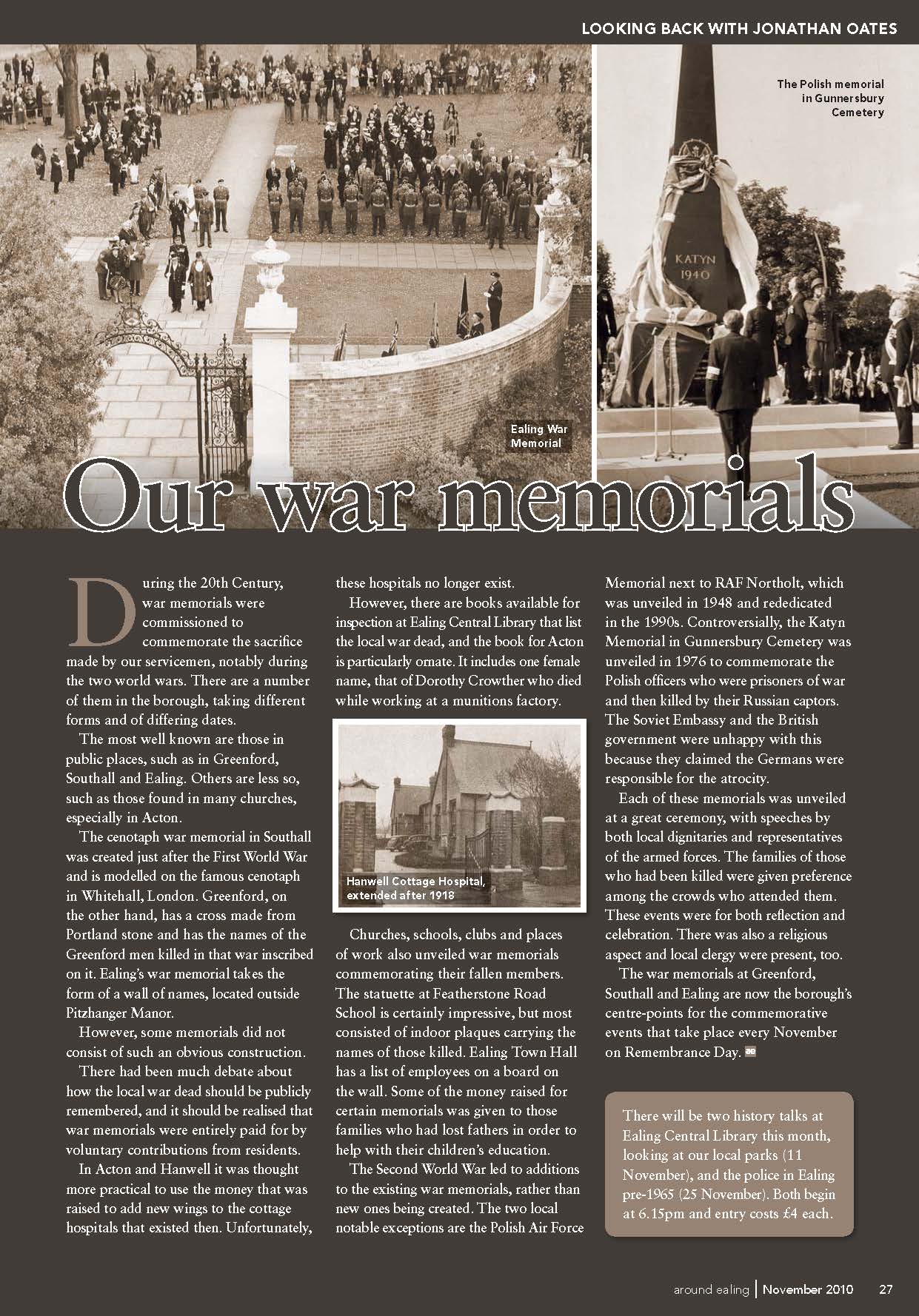 Remembrance Sunday and Armistice Day form an important part of the national calendar in November, and it is when the country’s many memorials to our war dead take centre stage.

During the 20th Century, war memorials were commissioned to commemorate the sacrifice made by our servicemen, notably during the two world wars. There are a number of them in the borough, taking different forms and of differing dates.

The cenotaph war memorial in Southall was created just after the First World War and is modelled on the famous cenotaph in Whitehall, London. Greenford, on the other hand, has a cross made from Portland stone and has the names of the Greenford men killed in that war inscribed on it. Ealing’s war memorial takes the form of a wall of names, located outside Pitzhanger Manor.

Some schools, churches and other groups erected their own memorials, either as plaques inside buildings or in the case of Featherstone Road School, Southall, a statue of a soldier – and a cross at St Martin’s Church in Acton. They were all paid for out of money given by local people.

There is no corporate memorial in Hanwell or Acton because it was decided at the time to put the money raised towards these town’s local (and now defunct) hospitals. There had been much debate about how the local war dead should be publicly remembered, and it should be realised that war memorials were entirely paid for by voluntary contributions from residents. In Acton and Hanwell it was thought more practical to use the money that was raised to add new wings to the cottage hospitals that existed then.

Some of the money raised for certain memorials was given to those families who had lost fathers in order to help with their children’s education.

However, there are books available for inspection at Ealing Central Library that list the local war dead, and the book for Acton is particularly ornate. It includes one female name, that of Dorothy Crowther who died while working at a munitions factory.

All of our memorials date from just after the First World War but they were all updated and added to after the end of the Second World War in 1945.

Indeed, the Second World War led to additions to the existing war memorials, rather than new ones being created. The two local notable exceptions are the Polish Air Force Memorial next to RAF Northolt, which was unveiled in 1948 and rededicated in the 1990s; and the Katyn Memorial at Gunnersbury Cemetery.

Controversially, the Katyn Memorial was unveiled in 1976 to commemorate the Polish officers who were prisoners of war and then killed by their Russian captors. The Soviet Embassy and the British government were unhappy with this because they claimed the Germans were responsible for the atrocity.

Each of these memorials was unveiled at a great ceremony, with speeches by both local dignitaries and representatives of the armed forces. The families of those who had been killed were given preference among the crowds who attended them.

These events were for both reflection and celebration. There was also a religious aspect and local clergy were present, too.

The war memorials at Greenford, Southall and Ealing are now the borough’s centre-points for the commemorative events that take place every November on Remembrance Day.