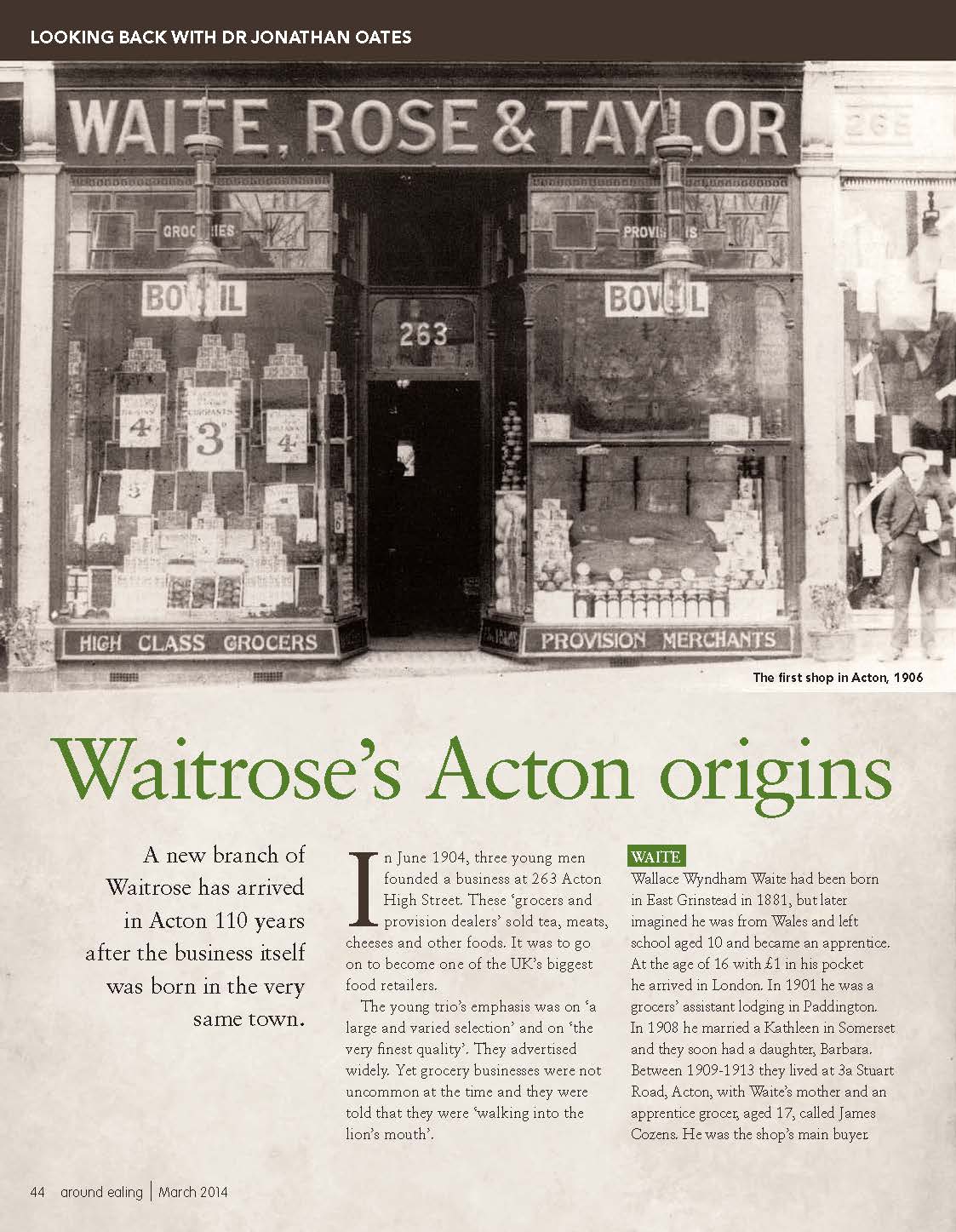 A new branch of Waitrose has arrived in Acton 110 years after the business itself was born in the very same town.

In June 1904, three young men founded a business at 263 Acton High Street. These ‘grocers and provision dealers’ sold tea, meats, cheeses and other foods. It was to go on to become one of the UK’s biggest food retailers.

The young trio’s emphasis was on ‘a large and varied selection’ and on ‘the very finest quality’. They advertised widely. Yet grocery businesses were not uncommon at the time and they were told that they were ‘walking into the lion’s mouth’.

Wallace Wyndham Waite had been born in East Grinstead in 1881, but later imagined he was from Wales and left school aged 10 and became an apprentice.

At the age of 16 with £1 in his pocket he arrived in London. In 1901 he was a grocers’ assistant lodging in Paddington.

In 1908 he married a Kathleen in Somerset and they soon had a daughter, Barbara. Between 1909-1913 they lived at 3a Stuart Road, Acton, with Waite’s mother and an apprentice grocer, aged 17, called James Cozens. He was the shop’s main buyer.

Arthur Edward Rose was born in London in 1879 and lived in Ealing Green as a clerk; in 1910 he married his business partner Waite’s sister, Bertha, in Herefordshire and they lived at 46 Drayton Avenue and 106 Mayfield Avenue in West Ealing, where they had three children. He dealt with the finances, having once worked for a solicitor in Edinburgh.

Interestingly, neither family had a servant.

The third of the trio was David Taylor, who was the shop manager, but he left the others in 1906 and returned to his former employ at Messrs Coopers.

The shop did well. In 1908 it was renamed Waitrose Ltd and had expanded, now occupying 263-267 the High Street as well as premises to the rear.

They had trebled their staff and expanded their range of goods and now sold hardware, coal and household tools. In 1910 they sold food at reduced prices to an Acton charity which wanted to give free food to the poor that Christmas.

There was further expansion, with branches opening at 190 Acton Lane, 65 Churchfield Road West, (both in 1913) 132 Bollo Bridge Road and 101 Devonshire Road in Chiswick (both by 1918). A branch was opened in Ealing in 1915, at 38 Pitshanger Lane. There were also branches in eight other London districts and one in Windsor by 1918.

They had received a slight check to their ambitions in 1915 when the main branch in the High Street was once again refused a licence to sell alcohol. Waite, now managing director, had argued in vain that there were few off-licences nearby and that the alcohol part of the business would be kept separate from the remainder.

In that same year the business took the unusual step of closing its branches in the afternoon between 1.15-2.15pm in order to allow the employees an hour off work for lunch.

At the end of 1915, Rose enlisted in the Army Service Corps as a private, then corporal, during the First World War. But he suffered from poor health afterwards and left the business in the 1920s. By this time both the Roses and the Waites no longer lived locally.

Rationalisation led the firm to begin winding down their operations in Acton by 1924, only having branches at 263 the High Street and 190 Acton Lane and in 1925 severed their commercial connection with Acton. The business was taken over by John Lewis in 1937 and it opened its first ‘supermarket’ in 1955.

Waite retired in 1940, having been awarded an MBE and having seen his little shop rise to the top of the industry. He enjoyed a long retirement and died in 1971.

In 2005 a plaque was put outside their first store in Acton.

This originally appeared in Around Ealing March 2014