Home > When we last faced a virus pandemic 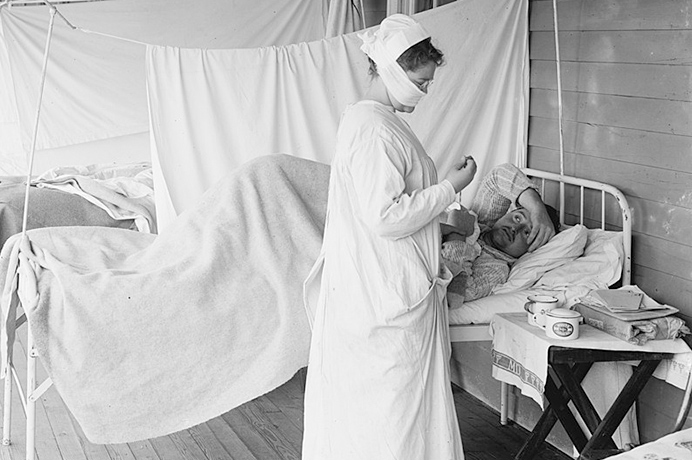 When we last faced a virus pandemic

The influenza pandemic of 1918-1919 had a global impact and our district was not unaffected, writes borough archivist Dr Jonathan Oates. It began in the autumn of 1918 and then there was second wave in the spring of 1919. This may sound very familiar.

As now, viruses spread in the air between people who were in close proximity. In the ‘first wave’, 338 people died of it in Acton and Ealing. Most were aged from two months to 35 years; it was noted that the middle aged and elderly were mostly immune. In the second wave, 88 people died. Densely packed districts were worst affected, especially south Acton were people were crowded into small houses. The stress and strains, physical and mental, caused by the First World War also contributed to people’s health being less than excellent and this may have made people more susceptible to disease. Southall, Hanwell and Greenford seemed largely unaffected, however.

Preventative methods were recommended by the districts’ medical officers of health. They were strikingly evocative of the current measures being used to cope with coronavirus:

Medical and hospital staff were rushed off their feet dispensing medicines and advice. Many were absent on war service.

At the time, a Dr Orr stated: “Control over the disease is practicable only by the active co-operation of every member of the community.”

There were lessons in schools about how to prevent the virus from spreading. Initially these were not effective, as Dr Orr wrote: “The measures taken to prevent the spread of influenza were of little avail in the first place of account of the great infectivity of the disease and in the second place on account of the want of assistance on the part of the public, who failed to take the necessary steps to prevent the spread of the infection, with a disinterestedness, or even it might be said callousness, which brought disaster to many families.”

The influenza pandemic resulted in the temporary closing of some schools because many teachers became unwell and many pupils likewise. Cinemas had additional cleaning measures and reduced opening hours. Some banks, factories and shops had to temporarily close due to the lack of staff fit for work. However, this was usually only for a few days at most and many businesses closed not at all.

However, there were no restrictions on numbers of people gathering; churches were not closed nor were numbers attending funerals limited. Crowds gathering in the street for Armistice Day on 11 November 1918 were not curbed.

By the end of April 1919, life was back to normal. The pandemic had gone almost as soon as it had arrived, but its brief instance had been deadly for some.

As well as reading lots more local history stories in our history section, you can also watch Dr Oates give talks on some local history topics on the Ealing Libraries YouTube channel.