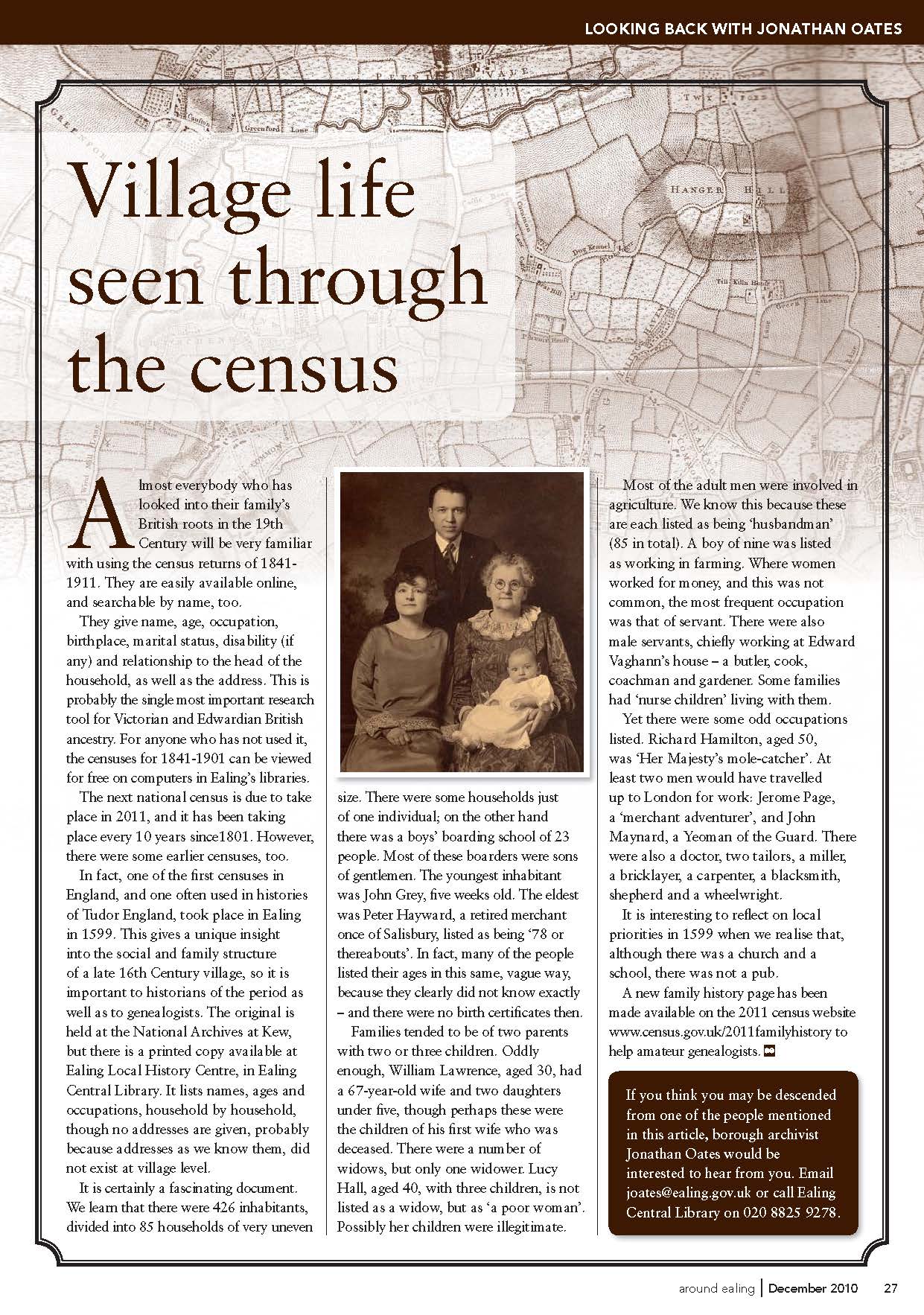 Village life seen through the census

Almost everybody who has looked into their family’s British roots in the 19th Century will be very familiar with using the census returns of 1841-1911. They are easily available online, and searchable by name, too.

They give name, age, occupation, birthplace, marital status, disability (if any) and relationship to the head of the household, as well as the address. This is probably the single most important research tool for Victorian and Edwardian British ancestry. For anyone who has not used it, every census from the period 1841-1901 can be viewed for free on computers in Ealing’s libraries.

The next national census is due to take place in 2011, and it has been taking place every 10 years since1801. However, there were some earlier censuses, too.

In fact, one of the first censuses in England, and one often used in histories of Tudor England, took place in Ealing in 1599. This gives a unique insight into the social and family structure of a late 16th Century village, so it is important to historians of the period as well as to genealogists. The original is held at the National Archives at Kew, but there is a printed copy available at Ealing Local History Centre, in Ealing Central Library. It lists names, ages and occupations, household by household, though no addresses are given, probably because addresses as we know them, did not exist at village level.

It is certainly a fascinating document. We learn in the census that there were 426 inhabitants, divided into 85 households of very uneven size. There were some households just of one individual; on the other hand there was a boys’ boarding school of 23 people. Most of these boarders were sons of gentlemen. The youngest inhabitant was John Grey, five weeks old. The eldest was Peter Hayward, a retired merchant once of Salisbury, listed as being ‘78 or thereabouts’. In fact, many of the people listed their ages in this same, vague way, because they clearly did not know exactly – and there were no birth certificates then.

Families tended to be of two parents with two or three children. Oddly enough, William Lawrence, aged 30, had a 67-year-old wife and two daughters under five, though perhaps these were the children of his first wife who was deceased. There were a number of widows, but only one widower. Lucy Hall, aged 40, with three children, is not listed as a widow, but as ‘a poor woman’. Possibly her children were illegitimate.

Most of the adult men were involved in agriculture. We know this because these are each listed in the census as being ‘husbandman’ (85 in total). A boy of nine was listed as working in farming. Where women worked for money, and this was not common, the most frequent occupation was that of servant. There were also male servants, chiefly working at Edward Vaghann’s house – a butler, cook, coachman and gardener. Some families had ‘nurse children’ living with them.

Yet there were some odd occupations listed. Richard Hamilton, aged 50, was ‘Her Majesty’s mole-catcher’. At least two men would have travelled up to London for work: Jerome Page, a ‘merchant adventurer’, and John Maynard, a Yeoman of the Guard. There were also a doctor, two tailors, a miller, a bricklayer, a carpenter, a blacksmith, shepherd and a wheelwright.

It is interesting to reflect on local priorities in 1599 when we realise that, although there was a church and a school, there was not a pub.

This originally appeared in Around Ealing December 2010