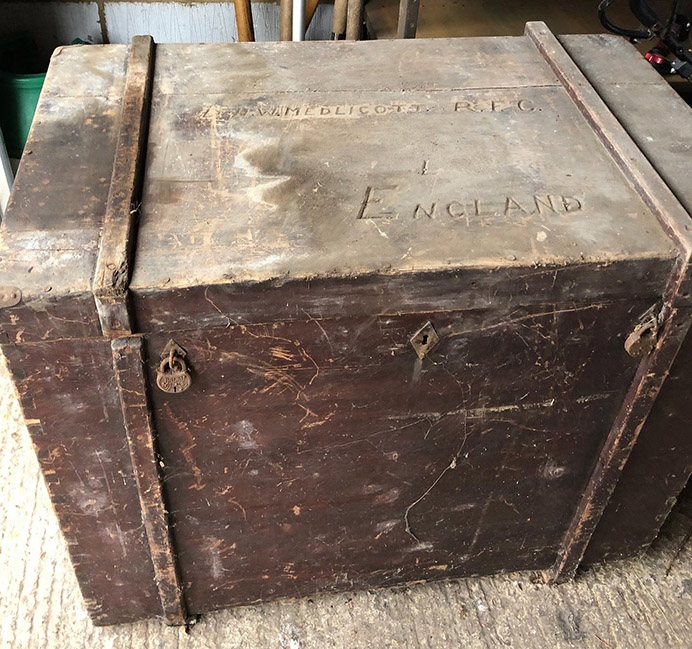 Did trunk discovered in shed belong to local war ace?

A trunk seemingly belonging to a local First World War hero with a remarkable tale has been uncovered in someone’s garden. And the public is being asked for help to trace the trunk’s rightful owners.

The well-aged, wooden trunk, engraved with the name HW Medlicott, could well belong to the flying ace Harold William Medlicott. He was from Ealing. After building a reputation for shooting down enemy planes, he went on to gain further repute and infamy, in equal measure, as an expert at breaking out of German prisoner-of-war camps.

Following the engraving of the name, the initials RFC are etched into the trunk’s lid. This could stand for Royal Flying Corps, which Harold was part of.

Matt and Naomi Eggleton bought their new house in High Wycombe, Buckinghamshire, in August and, when tidying up an area of the garden, they made their unexpected discovery.

Naomi said: “We found the trunk while clearing out an old rotten log shed at the bottom of our garden. We searched the name on the trunk online and found the history article on Ealing News Extra.

“Harold Medlicott’s story is incredible. So, that made us even more intrigued to try and find out how it made its way into our shed. Especially because, from what we can see, there is no geographical or family link. A colleague of mine has even mapped some of the Medlicott family tree for us but we have found no links to our property.

“We’re keen to get the trunk to its rightful owner. It would be a shame if something belonging to such an interesting historical figure were not to find its way home.”

Despite attempts by Ealing News Extra to trace the historian who originally researched the original story on Harold Medlicott (which appeared in Around Ealing magazine in 2010, then on this website in 2016) and contacting the RAF Museum and other history groups, no leads have yet been found to help the Eggletons find a link to the trunk’s owner or the Medlicott family.

Can you help? If so, please email the editor.

Harold Medlicott and his family lived in Ealing. He and his brother Sidney signed up to fight after the outbreak of the First World War. The council placed the brothers’ names on Ealing War Memorial a few years ago, among the borough’s list of war dead – and it was this that sparked the rediscovery of Harold’s incredible story.

Harold flew in the Royal Air Corps – the early incarnation of the modern RAF. He proved himself to be a daring and skilful pilot and brought down five enemy planes, which qualified him for the term ‘ace’, and for which he was mentioned in despatches on 30 November 1915. His plane then crashed over enemy lines and he was imprisoned…but never for long.

He escaped from German prisoner-of-war camps at least 10 times. He came close to escaping fully on several occasions, but bad luck led to his recapture.

Despite the alleged brutal beatings dished out to recaptured prisoners, these apparently only made Harold even more pugnacious and he is said to have glared back menacingly like a caged animal.

Harold’s arrival at any new camp would raise the morale of the prisoners. Correspondingly, the Germans would feel a loss of morale upon his arrival and it was often said that camp commandants would try to pull strings with the object of preventing Medlicott from being sent to their camp.

His comrade, Arthur Whitten Brown, who was in the same plane when Medlicott crashed behind enemy lines, survived the war and was knighted after finding fame as the navigator of the first successful non-stop transatlantic aeroplane flight in 1919. In so doing, he and his pilot John Alcock also won a £10,000 prize offered by the Daily Mail. This story also has an Ealing link, which we reported on recently.

You can read the full story of Harold and Sidney Medlicott in our local history section.