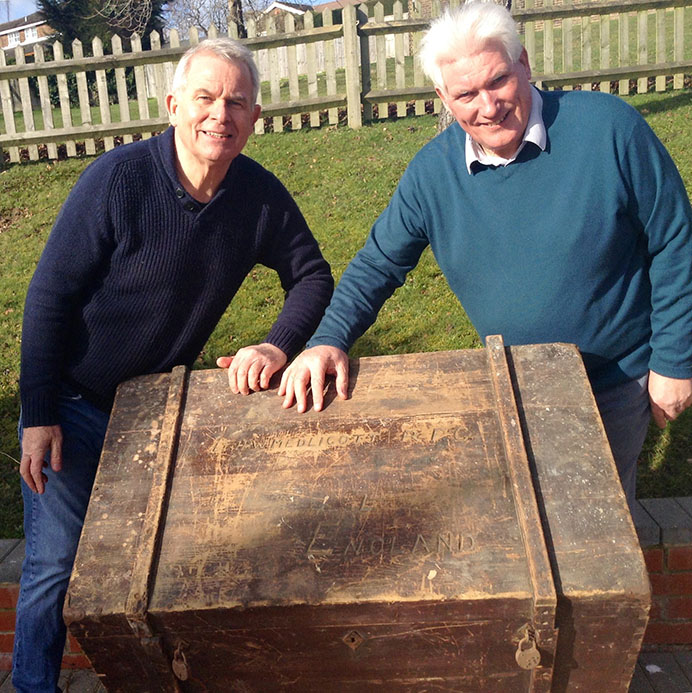 A trunk belonging to a local First World War hero, with a story worthy of Hollywood, has been successfully reunited with his family after they came forward in response to our appeal for help.

You can see Brian and Charles Medlicott above, who said having the trunk in their hands for the first time had been an emotional moment.

The well-aged, wooden trunk, engraved with the name HW Medlicott and ‘RFC’, belonged to the flying ace Harold William Medlicott, who was from Ealing. After building a reputation in the Royal Flying Corps for shooting down enemy planes, he went on to gain further repute and infamy, in equal measure, as an expert at breaking out of German prisoner-of-war camps.

Matt and Naomi Eggleton discovered the trunk after buying a house in High Wycombe, Buckinghamshire, and tidying up an area of their new garden. Their surprise at the discovery was matched by their amazement when finding out its likely history.

Finding the owners of the trunk…

Naomi contacted us, and we put out a public plea for help, after failing to trace the historian who researched our original story on the wartime exploits of Harold and his brother Sidney.

The response to our article asking for help was overwhelming. So many people got in touch offering what assistance they could. And then brothers Charles and Brian Medlicott contacted us. Charles had been alerted to the EalingNewsExtra story and called Brian.

“It was somewhat of a surprise when my brother phoned me late one evening telling me that it would appear Harold’s wartime trunk had been found,” said Brian.

“It was with great excitement the following morning I contacted EalingNewsExtra explaining our relationship to Harold and going through the details of a number of items belonging to him that had been passed on to us as children.

“We were consequently put in touch with the very kind couple who found the trunk, who had gone to the trouble of researching its origins. Having contacted Naomi and Matt, the trunk’s discoverers, we arranged collection and I must admit it was certainly an emotional moment on seeing the trunk and being able to feel the engraving of his name.

“To think reuniting some of the items we have which were more than likely in this trunk more than a hundred years ago is quite incredible.”

‘The story was so inspiring’

Getting the trunk to them was a source of pride for the Eggletons, who had been shocked to find the trunk – and then amazed at its back-story.

Naomi said: “We are absolutely delighted that the trunk has been reunited with its rightful owners. Ironically, when we purchased the house because of the owners sadly passing, it had been cleared by a specialised removal company.

“The trunk was the only remaining item which we found in a rotting shed tucked at the bottom of the garden.

Nobody has yet quite figured out how the trunk ended up in a shed in a Buckinghamshire garden (it may have been through Harold’s sister Winnie), but Brian said he felt that its rediscovery was the perfect conclusion to a bit of a journey he and his brother had been on in pursuit of Harold’s memory.

He said: “A few years ago we visited Germany to see and pay our respects to Harold, a truly extraordinary man, at his final resting place at the commonwealth cemetery in the town of Niederzwehren Kassel. Seeing the trunk has certainly brought back those memories and we are truly thankful to EalingNewsExtra, together with Naomi and Matt, for their efforts in bringing this true and historical story together.”

The Medlicott brothers’ father was Harold’s cousin. Sadly, Harold and his brother Sidney were killed in the war and their belongings were shared out among other family members. They had a sister, Winnie, who moved away from Ealing after marrying. Among the mementoes passed down to Brian and Charles were Harold’s compass, his cigarette case and hand-written details of some of his early escapes, with interesting comments of lessons he learned that he made when he was recaptured.

Although treasured, the significance of the heirlooms did not become fully apparent straight away. Brian recalled: “It was only probably when our own father passed away that our family history became more important to us.”

The remarkable notes kept by Harold of his escapes, recaptures and lessons learned make for a compelling read. Keep an eye on EalingNewsExtra for an article coming soon which will look at these notes and the tale they tell.

In the meantime, why not revisit the original story about Harold’s extraordinary war experiences?