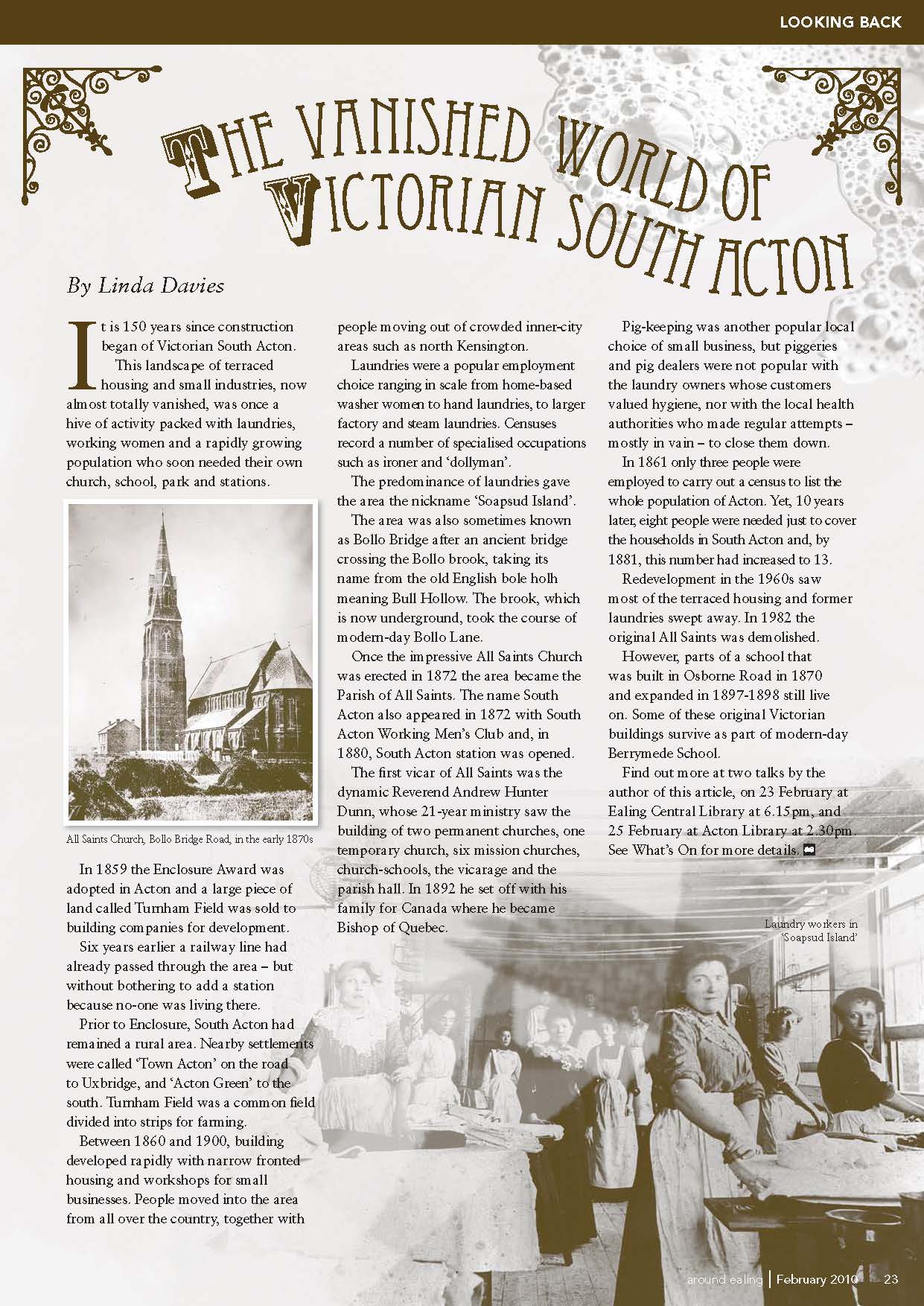 It is 150 years since construction began of Victorian South Acton, writes Linda Davies. This landscape of terraced housing and small industries, now almost totally vanished, was once a hive of activity packed with laundries, working women and a rapidly growing population who soon needed their own church, school, park and stations.

In 1859 the Enclosure Award was adopted in Acton and a large piece of land called Turnham Field was sold to building companies for development.

Six years earlier a railway line had already passed through the area – but without bothering to add a station because no-one was living there.

Prior to Enclosure, South Acton had remained a rural area. Nearby settlements were called ‘Town Acton’ on the road to Uxbridge, and ‘Acton Green’ to the south. Turnham Field was a common field divided into strips for farming.

Between 1860 and 1900, building developed rapidly with narrow fronted housing and workshops for small businesses. People moved into the area from all over the country, together with people moving out of crowded inner-city areas such as north Kensington.

Laundries were a popular employment choice ranging in scale from home-based washer women to hand laundries, to larger factory and steam laundries. Censuses record a number of specialised occupations such as ironer and ‘dollyman’.

The predominance of laundries gave the area the nickname ‘Soapsud Island’. The area was also sometimes known as Bollo Bridge after an ancient bridge crossing the Bollo brook, taking its name from the old English bole holh meaning Bull Hollow. The brook, which is now underground, took the course of modern-day Bollo Lane.

Once the impressive All Saints Church was erected in 1872 the area became the Parish of All Saints.

The first vicar of All Saints was the dynamic Reverend Andrew Hunter Dunn, whose 21-year ministry saw the building of two permanent churches, one temporary church, six mission churches, church-schools, the vicarage and the parish hall. In 1892 he set off with his family for Canada where he became Bishop of Quebec.

Pig-keeping was another popular local choice of small business, but piggeries and pig dealers were not popular with the laundry owners whose customers valued hygiene, nor with the local health authorities who made regular attempts – mostly in vain – to close them down.

In 1861 only three people were employed to carry out a census to list the whole population of Acton. Yet, 10 years later, eight people were needed just to cover the households in South Acton and, by 1881, this number had increased to 13.

Redevelopment in the 1960s saw most of the terraced housing and former laundries swept away. In 1982 the original All Saints was demolished.

However, parts of a school that was built in Osborne Road in 1870 and expanded in 1897-1898 still live on. Some of these original Victorian buildings survive as part of modern-day Berrymede School.

This originally appeared in Around Ealing February 2010