Home > The tale of two Dickens 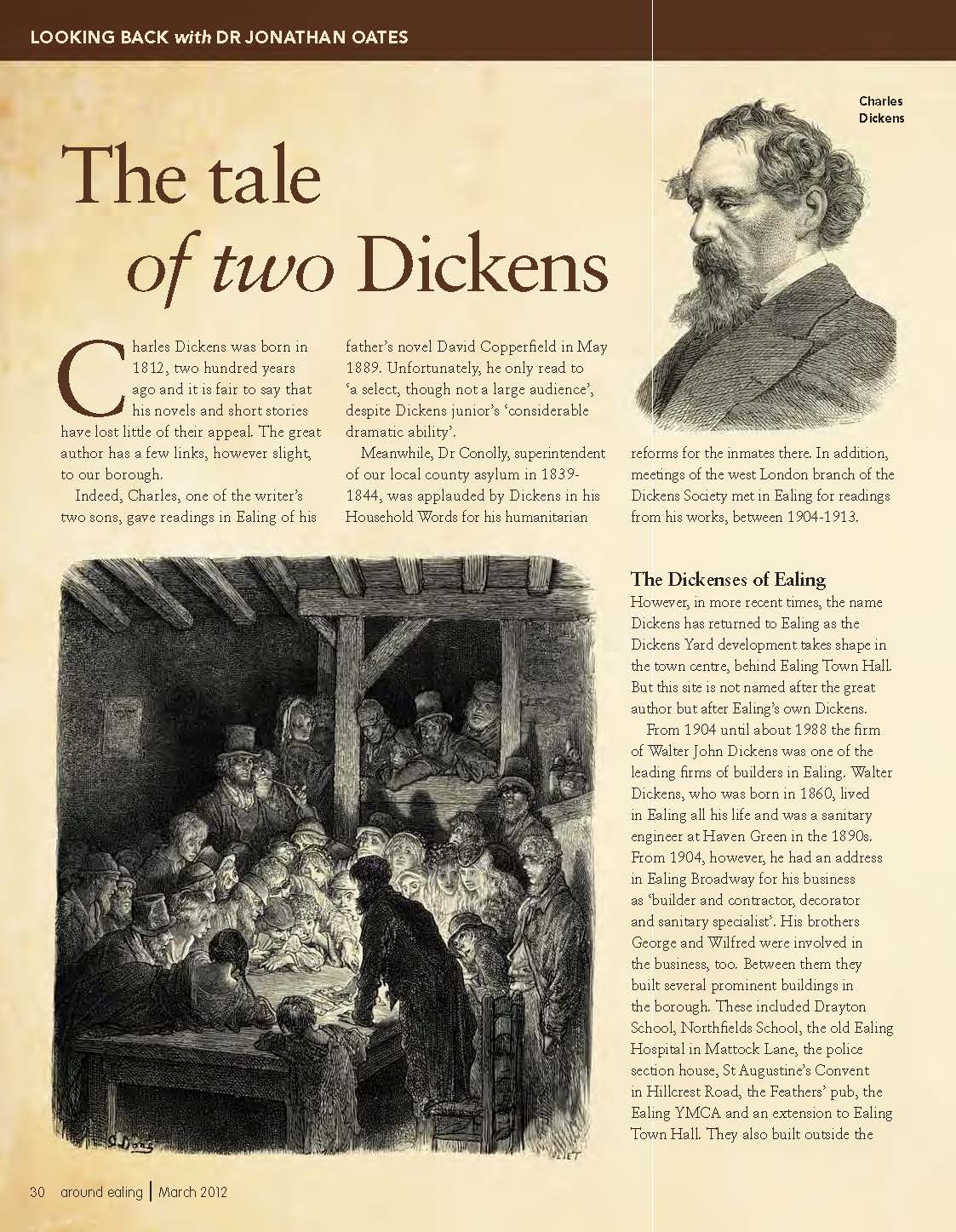 The tale of two Dickens

Charles Dickens was born in 1812, two hundred years ago, and it is fair to say that his novels and short stories have lost little of their appeal. The great author has a few links, however slight, to our borough.

Indeed, Charles, one of the writer’s two sons, gave readings in Ealing of his father’s novel David Copperfield in May 1889. Unfortunately, he only read to ‘a select, though not a large audience’, despite Dickens junior’s ‘considerable dramatic ability’.

Meanwhile, Dr Conolly, superintendent of our local county asylum in 1839-1844, was applauded by Dickens in his Household Words for his humanitarian reforms for the inmates there. In addition, meetings of the west London branch of the Dickens Society met in Ealing for readings from his works, between 1904-1913.

However, in more recent times, the name Dickens has returned to Ealing as the Dickens Yard development takes shape in the town centre, behind Ealing Town Hall.

But this site is not named after the great author but after Ealing’s own Dickens.

From 1904 until about 1988 the firm of Walter John Dickens was one of the leading firms of builders in Ealing. Walter Dickens, who was born in 1860, lived in Ealing all his life and was a sanitary engineer at Haven Green in the 1890s.

From 1904, however, he had an address in Ealing Broadway for his business as ‘builder and contractor, decorator and sanitary specialist’. His brothers George and Wilfred were involved in the business, too. Between them they built several prominent buildings in the borough. These included Drayton School, Northfields School, the old Ealing Hospital in Mattock Lane, the police section house, St Augustine’s Convent in Hillcrest Road, the Feathers’ pub, the Ealing YMCA and an extension to Ealing Town Hall. They also built outside the borough, too, including a number of hotels.

Walter had other interests as well. In 1925 he became a member of Middlesex County Council and had been twice president of the Ealing Philanthropic Institute, in 1911 and 1923. This would have pleased his famous namesake, for the organisation existed to alleviate the poverty of the deserving poor by private charity.

His brothers preferred to play local cricket in their spare time, though Wilfred was also involved in helping his fellow man by being the founder of the Three Pigeons slate club, a private benefi t society for working people. Walter was also a prominent local freemason.

Unfortunately, three of the brothers died in 1930 and 1931; Francis, who lived and worked for most of his life outside Ealing, was killed in a traffic accident, Walter and George died through natural causes. The last of the brothers, Wilfred, died in 1950.

Walter’s son, George, carried on the family business and the firm moved to premises in the Mall and, by 1975, were at Freeland Road. The firm later moved to Perivale in the 1980s and ceased to exist by the decade’s end.

Disappointingly, it is not thought that there was any close link between these builders and the Dickens of greater fame, but it is they whom the local development is named after, not him.

This originally appeared in Around Ealing March 2012