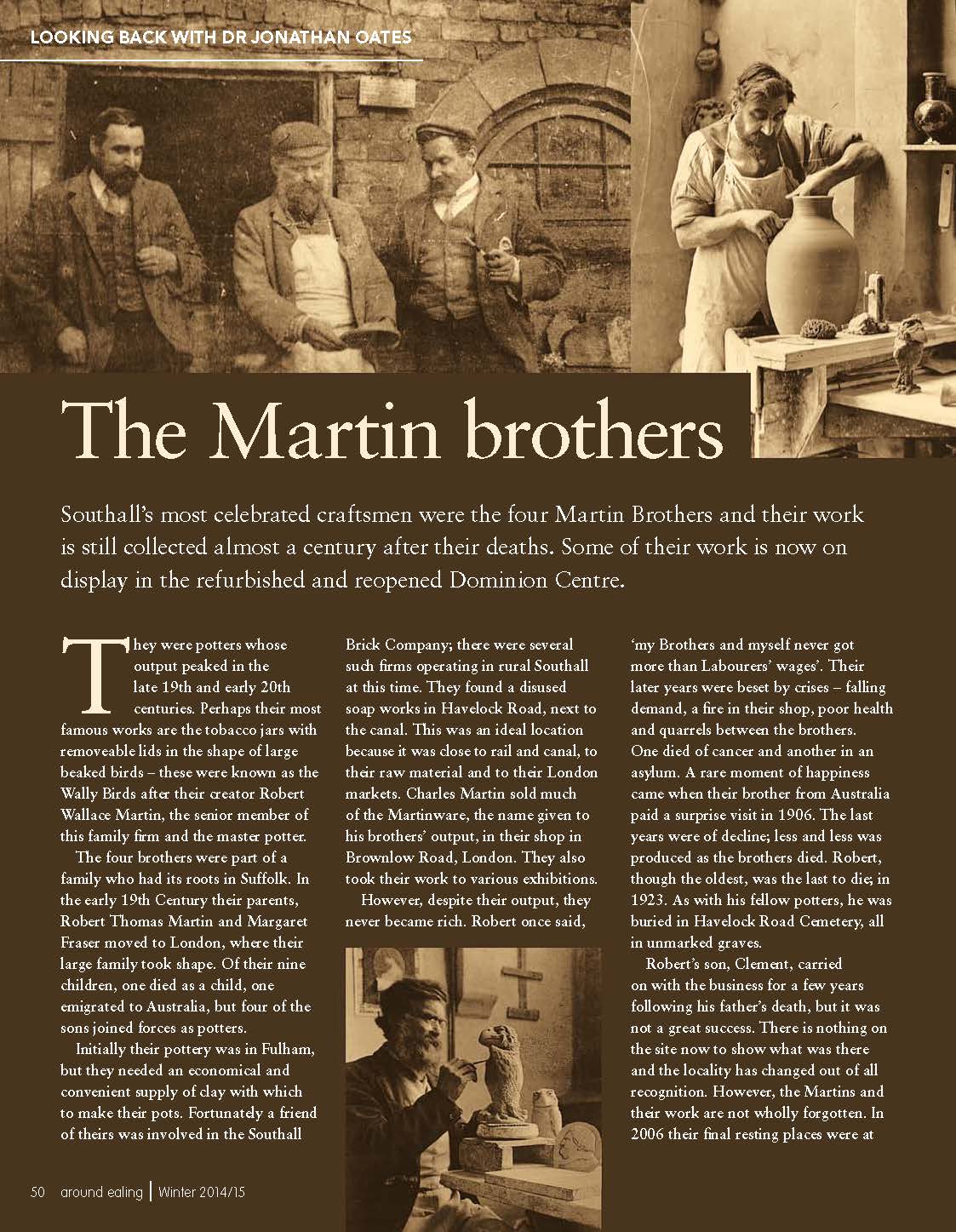 Southall’s most celebrated craftsmen were the four Martin Brothers and their work is still collected almost a century after their deaths. Some of their work is now on display in the refurbished and reopened Dominion Centre.

They were potters whose output peaked in the late 19th and early 20th centuries. Perhaps their most famous works are the tobacco jars with removeable lids in the shape of large beaked birds – these were known as the Wally Birds after their creator Robert Wallace Martin, the senior member of this family firm and the master potter.

The four brothers were part of a family who had its roots in Suffolk. In the early 19th Century their parents, Robert Thomas Martin and Margaret Fraser moved to London, where their large family took shape. Of their nine children, one died as a child, one emigrated to Australia, but four of the sons joined forces as potters.

Initially their pottery was in Fulham, but they needed an economical and convenient supply of clay with which to make their pots. Fortunately a friend of theirs was involved in the Southall Brick Company; there were several such firms operating in rural Southall at this time. They found a disused soap works in Havelock Road, next to the canal. This was an ideal location because it was close to rail and canal, to their raw material and to their London markets.

Charles Martin sold much of the Martinware, the name given to his brothers’ output, in their shop in Brownlow Road, London. They also took their work to various exhibitions.

However, despite their output, they never became rich. Robert once said, ‘my Brothers and myself never got more than Labourers’ wages’. Their later years were beset by crises – falling demand, a fire in their shop, poor health and quarrels between the brothers.

One died of cancer and another in an asylum. A rare moment of happiness came when their brother from Australia paid a surprise visit in 1906.

The last years were of decline; less and less was produced as the brothers died. Robert, though the oldest, was the last to die; in 1923. As with his fellow potters, he was buried in Havelock Road Cemetery, all in unmarked graves.

Robert’s son, Clement, carried on with the business for a few years following his father’s death, but it was not a great success. There is nothing on the site now to show what was there and the locality has changed out of all recognition. However, the Martins and their work are not wholly forgotten. In
2006 their final resting places were at last properly marked with headstones and their work can be seen and admired in numerous locations.

Over the decades, pieces of Martinware have been donated to Southall Library and Pitzhanger Manor by collectors such as Professor John Hull Grundy.

The new Southall Library at the Dominion Centre boasts a room (named after local historian George Twyman) in which to view parts of the council’s collection, as well as newly researched illustrated panels. The archives of Sidney Greenslade, friend to the Martins and collector of their work, can be viewed at Ealing Library.

This originally appeared in Around Ealing winter 2014/15