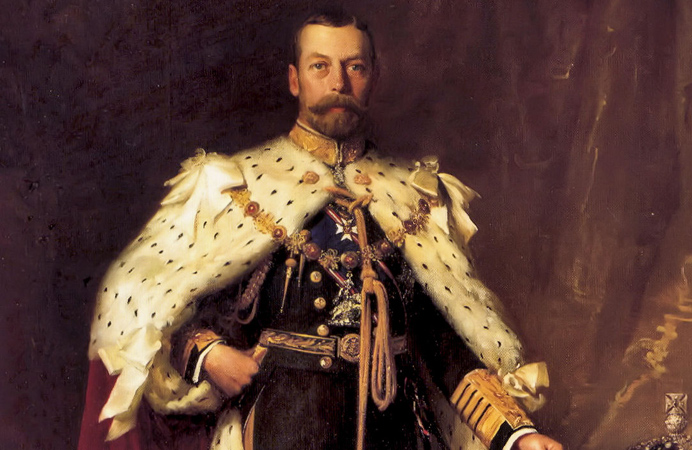 This is week three of the diary entries of Alexander Goodlet of Ealing, 80 years ago. Have you read the introduction? This week, Goodlet is shocked and moved by news of the death of the king – and a pair of lost explorers are found.

Surpassed myself today by sleeping peacefully on until 4 p.m. Still felt weary too when I did arise.                Took Joan and the youngster home and got great kudos from the latter by giving her runs at high speed on her doll’s pram.

Went on to Ealing to do some shopping and so home.

Kidd came in on his way home to wish the Pater goodbye. Have been busy on routine ever since dinner and believe, if I don’t start anything or just potter about, that I shall actually go to bed at a reasonable hour.

Japan has formally left the Naval Conference and it will be interesting to see what follows. I think that from her point of view she is quite right.

There has been a terrible accident in the G.W.R. at Shrivenham, some breakaway trucks from a goods train being run into by a down express; the poor driver being scalded to death and one passenger killed and many injured.

Rose at ten to bid the pater goodbye and then returned to bed, where the mater gave me breakfast. Thereafter slept like a log until 5 p.m.

Had to scramble about a bit after that, writing a letter to H.C. Holman enclosing a telegram from Arena, and doing some shopping etc.

Stanley came to dinner and later the others came in. We sailed two desperate races, of the most technically interesting kind, in which E.H. had a first and second and Stanley a first. I sailed extremely badly and deserved to lose third place in the second match to L.H.

The G.W.R. accident occupies much of the news space. It now seems that it was an up express.
It is reported that the Abyssinians have suffered a big defeat, but confirmation is wanting.

Rather a grim letter from Daniel.

Went to Woolworths and the Library. Walked both ways, which was a little hazardrous owing to the frozen snow everywhere and the proximity of small boys for snowballing all and sundry; this is a little dangerous when one wears glasses.

Spent the evening at home. Have been reading “Diary of a Young Lady of Fashion”; the truly delightful book with which I remember Miss King Hall hoaxing literary London 10 years ago. Also got Will Hay’s book on astronomy, which is very good.

The news today is of the discovery of two long lost explorers, Ellsworth and Kenyon, near the South Pole by the British survey ship, Discovery II.

I fear that Mr. R. Kipling is steadily sinking.

Was awakened by the mater for breakfast at 11.30 and rose to find two very bad events in the news.

The King is dangerously ill at Sandringham House with cardiac trouble and a chill, and in spite of frequent bulletins to say that he is holding his own I very much fear for him. Poor old gentleman, he has had a pretty hard life and somehow or other everyone seems to look on him as a relative. The business has quite upset the mater today and makes me gloomier in spirit than I’ve felt for a long time. Still, he has a wonderful spirit and of course will have the very best of nursing. How marvellously the Queen seems to carry on in these crises.

The other bad thing is the news that Mr Rudyard Kipling died last night. And so passes another queer link with that strange sunlit late Victorian age which always mysteriously fascinates me. Curious, how vivid for me he made that queer country charm, which you can almost feel in the story of how “Rabbits Eggs” hornsounded on the still country road at night in Devonshire. Well, he goes into the silence, but he certainly leaves his mark carven on English consciousness.

Kidd brought round Thomasina this afternoon and we listened in to the English-Welch rugger match, which was a fine one and ended in a no-point draw.

Went to Woolworths and the Library and on to tea at the Aunts’, whom I found well.

The mater and the Boys and I have spent a quiet and restful evening at the drawing room fire. I have been reading Kapitan von Rintelen’s book “Dark Invader” and I think that he was very disgracefully treated by our people, and disgustingly by the Americans.

The Abyssinians I see absolutely deny the story of Italian victory, so what the position there is I don’t know.

Rose at 1.30 and after lunch was fairly busy on routine jobs. Kidd and family were along to tea and we were quite a family party.

Wrote Daniel and went out to post it and get papers and tobacco. Stanley rang up and asked if he might come to dinner and we had a very happy, quiet evening. He left at 12.

Am sorry to note the mater seems more wearied than ever, and I’m sure this worry about the King has upset her.

However, Stanley’s music and a good rest beside the fire this evening seems to have cheered her up quite a bit.

The Boys have devised a table game of rugger which has distinct possibilities, and when it is fully developed they will have a most excellent game.

Only two further bulletins have been issued about the King, both somewhat reassuring; but I note the Archbishop of Canterbury has gone to Sandringham. An ominous portent.

Rose at lunchtime and have been fairly busy ever since. It is ten to ten and the mater, Boys and I are in the drawing room. We have just heard on the wireless that “The King’s life is drawing peacefully towards its close”.

No one has said a word here. The mater seems heart broken, and the Boys uneasy and shocked.

I went up to the post to post a letter and an old gentleman at the pillar box was in tears. It is a beautiful, clear cold night; one can visualise Sandringham lying in the quiet countryside waiting.

It is 10 o/c and Big Ben solemnly tolling the hour. We shall know in a moment now.

Just a repetition again. This waiting is horrible. Nobody in the room has spoken a word. The wireless of late years has brought the King very intimately into the lives of us all. Somehow it now makes us all members of the family assembled to witness his passing.

I had to write a letter to Francis after the last paragraph and go to Acton to post it. Back home, I made tea and we sat listening again, once more in that odd silence until after midnight, when, Fuzz being almost asleep on his feet, the mater took him off to bed.

And then came the final news bulletin, just before 12.20.

His Most Gracious Majesty King George V passed peacefully away a few minutes after midnight. God rest and reward him, and bless and comfort the Queen. Their record of service and abnegating sacrifice to the Nation has been unique and I suspect demanded more from them as man and woman than we are ever likely to know. I like to think that they had their Silver Jubilee and that it brought them happiness, as I believe it must have done.

I only saw him twice, once early in 1918 at the White City, and one morning in early summer in 1928 when Kidd and I had gone to the Serpentine and he passed us on horseback in the Row. He only had a gentleman and a groom with him and it was only Kidd’s pointing him out to me that caused me to notice him. The Queen I have never seen.

Well, at least they have seen the happy marriages of their daughters and three of their son and have known the joy of their grandchildren.

Was it premonition, I wonder, that made him declare “Britannia’s racing days were over” and lay her up for good? And that odd note of appeal in his Jubilee and Christmas Day broadcasts?

I am grieved over the effect of it all on the mater. She is genuinely brokenhearted, more so than I have seen her since Peg went. With her passionate devotion to our own family circle she rather identifies the Royal Family and their joys and sorrows with ourselves.

What a reign it has been, seeing out a mighty war and transforming the nation or the people rather, out of one era of civilization into another completely different, and transforming the monarchy from an institution into a vivid, living entity in the lives of every single person in the country; aye, and not in this country alone either. Again, God rest and bless Him and Her.

So now we have a new King; I wonder if he is to be Edward VIII or David?

Poor fellow, how cruelly inexorable to human feelings are the routine and duty of Royalty. Already he is King, and heir to all the formality and duties of the office while bowed down with his father’s death.
I hope to go tomorrow to the Exchange to hear him proclaimed.

Well, that’s the end of another age. Curious, I have now lived in four reigns, Victoria, Edward, George, and now? I wonder if he will become King David, reigning over the whole Christian world, as the British Israelites prophesy. I wonder? It is a great time in which to live.

God preserve my own folk to enjoy the blessings it may bring.

I had a letter from Daniel today.

Slept most of the day and only rose at 2.30 pm. Took Joan and Thomasina home at 6.30 and called on the Aunts.

After dinner tonight Mr Stanley unexpectedly called and spent the evening with us until 11.15.

We listened to Mr Baldwin’s address to the nation on the King’s death. It was an admirable effort, dignified, sympathetic, understanding and beautifully delivered; moreover, his references to the Queen were most moving and I think well express the feelings of the whole country.

I did not note yesterday that there have been two bad railway accidents, and last night there was another; two of them with loss of life.

The mater had two letters from the pater tonight. I fear he is both disheartened and exasperated at the way things stand, both in Burgos and London.

After all, I see the King is to be proclaimed as Edward VIII, and not as David.