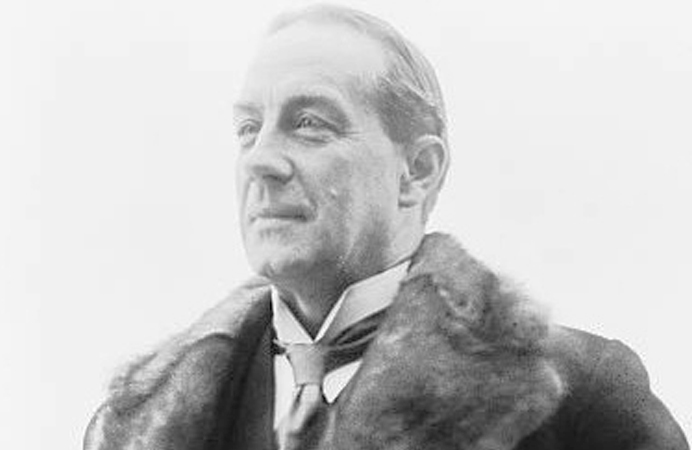 This is the seventh week of our serialisation of Ealing resident Alexander Goodlet’s diary from 80 years ago. This week, a relative visits who had fled the Russian revolution; Prime Minister Stanley Baldwin (pictured) and Parliament begin to discuss British defences amid news of riots and war filtering in from abroad; and his mother (‘Mater’) takes unwell. To see the background to the serialisation, and the cast of characters, read our introduction.

So home for tea, which in due time came Mrs Robert Goodlet. She is a delightful woman and had much of interest to tell us about her branch of the family and their doing. They have been out in St. Petersburg since 1797.

These present crowd lost everything and barely escaped with their lives in 1919.

Saw her off at 6 p.m. and wrote a long letter to the Pater. Paid the phone. Daniel and I went to Ealing at 10 p.m. to catch the air mail. Called at Kidd’s on the way home, but unfortunately found him gone to bed. He had his interview with the Air Ministry people today, but of course doesn’t know how he’s done.

Daniel tells me he is going to spend the week-end with H.R. Norman.

The gale plus the ice and snow seems to have done a lot of damage.

Breakfast in bed, and then another sleep until lunch. Busy on routine all afternoon and then Mrs Stanley came for dinner. Afterwards Kidd, Howard and L. Hodges turned up and we sailed two long and most exciting matches. Mr Stanley won one and I the other. Kidd had very bad luck, being caught in a jam and forced miles out of his course.

Slept soundly until lunch time, when I rose and had a meal with the Mater and Daniel. Daniel then departed to spend the weekend with H.R. Norman.

Busy on routine work until 6 p.m., when I went to the library and called on Kidd on the way home.
Found that he had had a letter saying that the Air Ministry job is off. Bad luck.

Home to dinner and later to Ealing again to air mail letters. Fuzz is again laid up, poor chap, he does not seem to shake off his cold.

Mater had a letter from the Pater this evening giving her an amusing account of how the local army workshops are working overtime on ammunition for the general election.

The news is that yesterday there was a brutal assault upon M. Leon Blum, the famous French socialist, by a lot of the Action Francaise crowd. There is going to be trouble in France, I very much fear.

Today Parliament was occupied by a debate on the proposed creation of a Ministry of Defence.

Up for lunch with the Mater and Boys. Fuzz was not at school this morning, his cold being still bad. Buzz went off to see “Top Hat”, the Mater went to Ealing and Fuzz and I played the piano in the drawing room.

The Mater, he and I were just preparing to have tea when who should arrive by car than Ine, the Doc. and Margaret, on a flying visit. This immediately made a very jolly visit, and we have persuaded them to stay the night. The Doctor has sailed six matches against me, won four, lost one and split one. I fear I have badly let down the reputation of the Club.

Today the news is all of Ad. Sueter’s bill in Commons to form a Ministry of Defence and the interesting debate thereon, culminating in an amazing, but deserved attack on Mr Baldwin by, of all people, sir A. Chamberlain, who accused the Premier of having twice deliberately misled the House on questions of defence.

It looks as if Lord Beatty, who has been unwell for so long, has now become seriously ill.

Fairly busy all night on routine jobs and got to sleep on the sofa at 6.30 a.m. Awakened at 10 for breakfast to find the Brighton party and left at 9.30. After breakfast returned to bed and slept gloriously until 4 p.m. Afraid I thereby missed Kidd and his folk when they came.

Mr Stanley came to dinner, and a very nice one it was, and afterwards he played to us for over an hour. Later L. Hodges came in. They left about 12.15. Altogether a pleasant and homely evening.
The French Gov. seems to have put the curb firmly on the riotous elements in France, and the Spanish elections seem to have gone off quietly. Italy claims to have won a crushing victory in Abyssinia, but that remains to be proved. Lord Beatty seems to be improving, I’m glad to say.

Actually was in bed and asleep by 4 a.m. this morning and awakened on my own at 11.15. Went down to the bank at 2.30 and after a troublesome half an hour trying to get J.M.s draft put in a separate account walked along the Embankment to Charing Cross and saw the last of the abutments of Waterloo Bridge. Walked on to Piccadilly and so by Tube home.

Had a letter from the Pater to-night and one from Daniel this morning. Wrote the Pater, also Miss Millard, M.T. School and the bank and have just been down to Ealing to post them all. Feel horribly weary and cold and the old sense of futility seems to be in the ascendant once more. Sorry to say too that the Mater has a very bad cold and Fuzz is still not well enough to go back to school.

Got to bed at 4 a.m. and slept deliciously until 1 p.m. today. Lunched with the Mater and then was on my own, as she went off to an At Home in Fuzz’s form at M.T.s. Was engaged on various jobs until Fuzz came in at 5.30.

Was rather alarmed when the Mater and Fuzz returned at 7.30 to learn that the outing had been too much for her and that one of the masters had had to drive her to S. Harrow as she felt unable to face the journey by train. It’s all these awful years in this damned house, I suppose.

After dinner, I was just preparing to put in a clear two hours on the map when in came Mr Stanley, and that resolution had to go by the board. However, his company was as ever charming and the evening went very pleasantly.

The Mater had a letter from the Pater, but it contained no news.

Am still most desperately weary, mind and body.