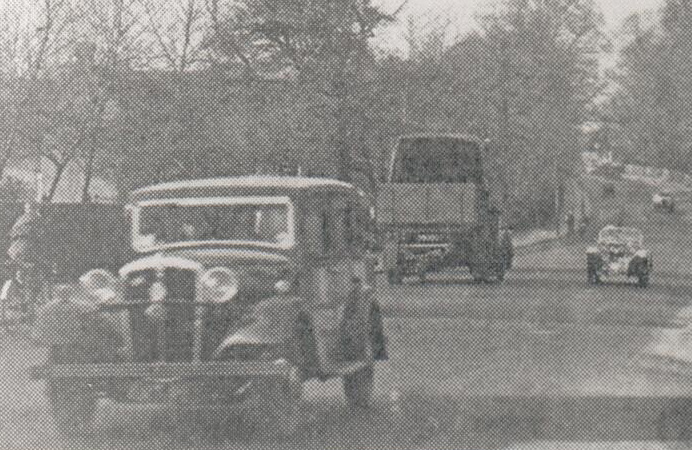 This is the fourth week of our serialisation of Alexander Goodlet’s diaries from 80 years ago. This week, Nazi Germany begins to attract international approbation, Goodlet sees the king’s body lying in state – and watches the funeral train pass Hanger Lane. (Read the introduction to series here).

The mater wakened me at 10 this morning and together we listened in to the historic ceremony of the proclamation of the King, Edward VIII. The BBC running commentary was splendidly done, while the actual reading of the proclamation at the various points, the trampling of horses’ hooves, the sound of the coach wheels, grounding of arms and above all the steady reverberation of the saluting guns all combined to make a pageant of sound that was nearly as good as witnessing the whole thing. An impossible business for the ordinary mortal.

Had breakfast and to the bank, meeting Joan and Thomasina on route. Renewed my motor licence and went into Westminster Abbey, the first time I have visited it since 1911. How old I am getting. Walked across the park to Buckingham Palace and had the good luck to see the King leave for Liverpool Street. He seemed to me to be looking very white and haggard.

Was rather disgusted at the bad taste displayed by much of the crowd at the Palace, sports clothes, bright scarves, ties and the like much in evidence. Elsewhere a note of decent restraint prevailed very largely among all classes.

Home to tea with the mater and Fuzz and then wrote long letters to the pater and Daniel, which I was obliged to go to Ealing to post. Poor Buzz turned up with a shocking cold caught while out running in a cross country run.

After dinner over to Kidd’s, where I spent a pleasant two hours with them discussing events. So home for a chat with the mater before the fire.

Note a good deal of regretful comment among the people that the King should still continue to use the air now that he has come to the throne. Actually, of course, he is the first British sovereign to fly.

The League of Nations censures the Nazi administration of Danzig. There will be trouble there.

Kidd and Hodges came in afterwards and we sailed two very interesting and pleasant races. E.H. won one and Kidd the other. E. is sailing in brilliant form this session.

Today King George’s body was brought from Sandringham to Westminster Hall, where it will lie in state until Tuesday. London gave its arrival a most reverent and moving reception. L.H., of the Office of Works, has been terribly busy on the preparations at the Hall. He has secured a fine official programme of procedure issued by the Earl Marshal.

Today Kipling was buried in Westminster Abbey. Mr Baldwin attending, who shortly after in the Commons made a great speech on the late King and the Monarchy.

Today died Dame Clara Butt. How the 1890s are going.

Up rather late for breakfast with the Aunts and the mater. Aunty Jess absolutely insisted on giving me 1/- for some cigarettes. Most decent.

Spoiled things by going back to bed again for a couple of hours. Joan and Thomasina were here to tea and I took them home before going on to the Library and the Aunts’, where I had a pleasant cup of tea with them.

Quiet evening at home. The mater had a letter from the pater who is well, but very exasperated by the whole position of things.

The King’s lying in state was made open to the public today and thousands must have filed through the Hall to see it.

Not a great deal of other news. I am glad to see that the S.R. have won a tremendous rating action against a number of councils.

Already a month since Christmas Day; how terrifying is the inevitable passage of time.

Made a poor start as usual and did not do very much in the afternoon. At tea time listened to the BBC version of the Scott Antarctic epic of 1912 and thought it very well done. Went shopping in Ealing and to the Library. Then on to the Aunts’, where I spent some time, finally calling on Kidd and Joan on the way home.

Quiet evening by the fire and I am a fool, as it is now 5.30 am, so that I have spent just 6 ½ hours reading and dozing.

There is said to have been a tremendous queue of people filing through Westminster Hall today; some estimate the number at 110,000 people.

The mater had a letter from the pater tonight. He seems well but does not give much news.

Slept until 2pm, in fact only rose in time for lunch. Spent the afternoon working on that beastly map (it is a fiend of a job).

The Aunts and Kidd, Joan and Thomasina were here for tea and dinner and we had a most agreeable time together. The special reason was the memorial service for King George broadcast from the Albert Hall; it was very fine and the address by the Archbishop of Canterbury magnificent. What a noble speaker he is.
L. Hodges came in later to type a letter, his own typewriter having broken down. He and I sailed three races, all of which I was lucky enough to win. Everybody, I think, enjoyed the evening.

For seventeen hours yesterday people field through the Hall at Westminster.

I forgot to mention the other day that a coal peace has been effected by a wise and generous compromise between owners and men’s leaders. A tribute to the King’s death, I think.

Then went to join the queue to vie the lying in state at Westminster Hall. I had to pass through it to go over Lambeth Bridge, and joined it at the south end of Vauxhall Bridge at 5.45. Then for 4 ¾ hours it was just move and halt, move and halt, in rain, wind and a ten wide column. Never have I seen so enormous a queue, let alone been in it, and I did not see one single instance of irritation, bad temper or impatience during the whole 4 ¾ hours’ pilgrimage.

Once inside the Hall the effect was tremendous and awe inspiring. On the carpeted floors the noise of shuffling of thousands of feet died away, while the good humoured conversation of the queue was awed into silence. The effect of this sudden cessation of noise and then the first glimpse of the coffin away down in the middle of the great, gaunt hall, with the lighting concentrated on the catafalaque and dying away to queer shadows and beams amidst the glorious rafters of the immense roof, was heart catching. Down from the raised floor by which the people entered they swept in two slowly moving tides which endlessly moved past the dais and coalesced again to pass, somehow rather abruptly, it seemed, out into the everyday life of Westminster. The ceaseless guard of honour by Guards officers, wardens with their halberds and Life Guard troopers was most impressive.

On the coffin, which was covered by a magnificent pall, was a lovely wreath from Queen Mary, the Imperial Crown, the Sceptre and the Orb. At the head was a large gilded cross.

Something that particularly engaged my attention was the attitude of the Hall attendants and the police on duty within it. Although they have now had days of this seemingly endless trail of people and must obviously desire to expedite the flow as much as possible, nevertheless their whole attitude was that of courteous deference to everyone who came in. There was no suggestion in the least of “moving on” the people. A smiling and courteously tendered word of advice here and there as to the best path, that was the utmost hint of control given. The effect was to make one (and, I suppose, everyone) feel a distinguished and welcome visitor. An admirable effect.

Reached home at 11.30 to find the mater very weary and worried, I am sorry to say. I hope that after tomorrow, when this business will be over;…she will feel better.

Had a letter from Daniel today.

The mater wakened me with breakfast in bed this morning and I rose at 10.30. The Aunts were already here and with the mater had listened to the broadcast of the first part of the procession across London.

The Boys and I went up to Hanger Lane to see the funeral train pass, and found a crowd there the like of which has probably never been there before.

The train was due to pass at 12.10, but it did not do so until 12.50, when we saw it duly pass at no great speed. Back home, where Mr Stanley and Joan were to lunch, we learned that a hitch had occurred to the procession at Marble arch, by reason of the crowds bursting the cordon and swarming across the road.

Surely a most disgraceful and lamentable thing to happen on this of all days.

In the result, the Great Silence at 1.30 was at the moment that King George’s coffin was “piped on board” the gun carriage at Windsor Station, and not when he was buried.

We listened to the burial service from the St. George’s Chapel, and it was beautiful and most moving.

Stanley went home for tea and after we had it here Aunty Mary and I accompanied Joan and Thomasins home, where we met Kidd.

Back here for dinner, after which Mr Stanley came in and we all spent a pleasant evening together. Saw him to Horn Lane at 12 pm. The Aunts are staying the night.

Started to write the pater and by a strange coincidence had a letter from him half way through my own. He seems to be all right, T.G.