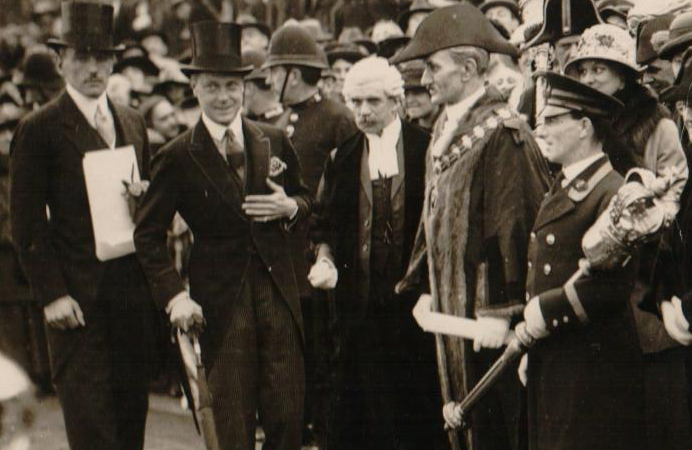 Week 49 is dominated by what Goodlet calls ‘the Royal crisis’ as it becomes clear that King Edward (pictured above during a visit to Acton while he was still Prince of Wales) may have to abdicate if he is serious about marrying Wallis Simpson.

Was into bed by 3 am, so am really improving. Probably as a consequence was up of my own accord to breakfast at 10.30.

In the afternoon went over to MTs to deputise for the Pater at an At Home by the officers of the Cadet Corps. Met the CO, Major Brown and thought him rather a decent sort. Met also one Turner and found him quite likeable.

The tea was excellent and the speech by Brown likewise. The icy wind, however, (really dreadful) which has given me earache and a headache rather spoiled the expedition.

The Aunts were here to dinner in honour of the birthday. Out of his birthday funds old Buzz most generously presented me with a supply of cigarettes. Very decent of him.

Another severe battle is raging for Madrid; if the Rebels lose it the matter will be serious for them.

No word from JM.

Woke at 10.30 this morning with a heavy cold and a thick head, the result of the visit to MTs in the icy cold winds of yesterday. It is really remarkable how a visit to that school nearly always results in an illness for some one. It is the blackest spot I know and the journey hither and thither one of the most dangerous.

The Mater went out shopping on the afternoon while I kept the house, which I did by dozing by the fire. After dinner went round to Kidd’s, where I spent a pleasant two hours with them. Expect to get to bed early again this evening, although I don’t really feel so tired now.

I was rather surprised to see quoted some paragraphs in provincial papers, rather hinting at the King’s entanglement with that American woman and suggesting that the frequent Cabinet meetings recently are more concerned with that than with war. The paragraphs were apropos of an outspoken critical speech by Dr Blunt, Bishop of Bradford. If it is not true he will be in the soup.

Woke at 10.30 am to hear the Mater and Pater discussing with tremendous excitement some topic and rose to find that all the rumours about the King and Mrs (Simpson) have boiled over at last into full press publicity in this country and that we are in the throes of a tremendous constitutional crisis, such as perhaps there has not been in this country since Charles I broke with Parliament. The Aunts joined us at breakfast and were appalled at the news.

Joan and the little girls came in later.

After lunch went down to the bank and couldn’t help contrasting the attitude of the average person to this affair with that of King George’s death. Then, everyone looked grave, but continually indulged in talk about it, and the King’s life. Today, while everyone looks grave, and indeed apprehensive, there seems a great disposition not to talk about it. This evening all the papers have large photographs of Mrs Simpson, with accounts of her life. She is said to be ill with the strain of the present position. The newspapers seem to make out that the position is extremely serious, from the point of view of the deepness of difference between the King and the Cabinet and that in this unhappy deadlock…the Dominion Cabinets are behind our own in their determination to prevent Mrs Simpson becoming Queen.

A suggestion has been made that the King might marry her as Duke of Cornwall, and consent to a bill of exclusion for any issue of the marriage. An alternative has even been suggested, that he might abdicate, but this seems to me to be carrying things to an extreme and terrible issue. I cannot for the life of me think how he, with all his associations and special education in constitutionalism can ever have thought that such a wedding could have been effected. I wonder if he imagined that his tremendous popularity and prestige would have enabled him to override the Constitution. Or, I wonder if he thought he could have effected it in the riot and confusion of a great world war such as, God help us, seems just about to burst out?

Anyway, whatever happens and be the outcome what it may, the harm that has been done to the Crown and to the King’s own prestige is irredeemable; or at least it will take 20 or 30 years to allow the shock to dissolve. It is all a terrible tragedy.

I see all the members of the Royal Family have cancelled their appointments. Whether this is in anticipation of some drastic event or just out of seemliness, one does not know.

The party yachted tonight and Mr Stanley and I were well beaten. Walked to Horn Lane as usual.

The Mater seems, unhappily, now to have a bad attack of rheumatism today and my own cold pursues its exasperating course.

Did not wake quite so early this morning & when I did it was with a splitting head and fiery throat; some sort of catarrh, I suppose. However I was up long before lunch.

In the afternoon worked on routine until 4pm, and then went shopping in Ealing for the Pater. Home, and then to Ealing again, to Woolworths and the Library and then on to the Aunts’ for tea. Then round to Kidd’s, being driven by Leslie Hodges, whom I chanced to meet.

At Kidd’s there was a charming dinner party to celebrate Kidd’s 28th birthday, Howard and myself being the guests. Left at 12 midnight.

Had a long letter from Daniel tonight; it seems he is laid up with a cold.

Today the country’s whole topic of conversation is the Royal crisis. No decision has yet been announced and so we are left wondering. I note that a large section of popular opinion seems to be veering towards the King who has, it alleges, been forced into a difficult position by impertinent intrusion into his private life of the world’s public, especially the Dominion Cabinets. On the other hand, one has the feeling that it was his duty when he came to the throne to have put away all possible causes of difficulty. I note that Mr Baldwin says that any question of a private marriage is not to be thought of. If the King marries then his wife is ispo facto Queen, with all that this implies. Rumour has it that none of his brothers are keen on taking the job in case of an abdication. Fortunately Princess Elizabeth is not of an age to sign away her own right and of course no one can sign them away for her.
I note that all the Royal Family held a long conference last night while Mrs Simpson, franked by diplomatic privilege, made a hurried journey during the night to Paris, where she is said to be en route to the Riviera.

Up reasonably early this morning and over breakfast perused a second long letter from Daniel, who is strongly pro-King and insinuates that the crisis has been manufactured by the die-hard element in the country, who are afraid of the King’s increasing interference in social work in the distressed areas. This is quite wrong, I think.

Joan and Thomasina came in this morning. Was very busy on routine work all afternoon and after tea went to Kidd’s, W. Ealing and the Aunts’. Busy after dinner and am now tackling a big bunch of correspondence. I am afraid the Matter’s rheumatism is not improving much.

It is curious how home events seem to have blotted out foreign affairs these last days; even the newspapers seem to contain nothing of interest relating to them. Judging by the popular press the tide of public partisanship for the King is ever growing. I think he will make that woman Queen and really it hardly matters now.

Sat up until 4.30 last night writing  a severe letter to Daniel and, having then some routine work to do, it was 6.30 before I got to bed.

Mater brought me breakfast in bed and I was up for lunch. Kidd and family were along to tea and I hope none of them has caught a chill on the way home; the weather is icy.

Very quiet evening and in fact I am writing this at 9.30pm, so I will not be late tonight.

Today the papers are of course still full of the crisis, and there seem to me to be a great danger in the rising tide of popular hysterical sentimentality in favour of letting the King do as he wishes, rather than abdicate. In other words, we seem well on the way to having a King’s Party. A ghastly idea.

Abdication too is fraught with appalling dangers, so we are left with either marriage or renunciation, and either is bound to leave a very bad flavour. How could he ever let such a situation develop?