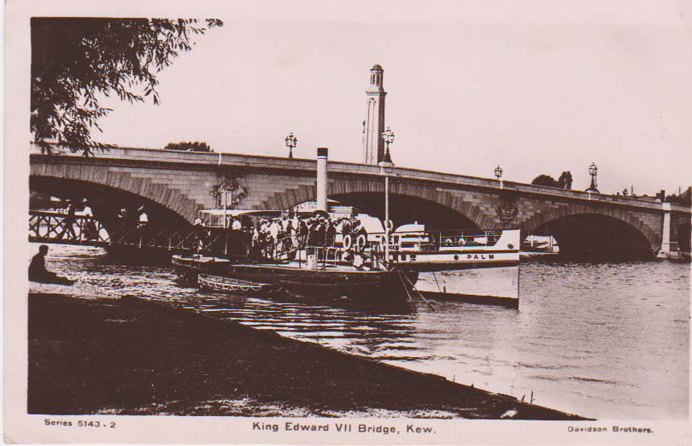 Goodlet takes a stroll to Kew Bridge (pictured) in week 48 while the march to war speeds up a notch with developments like the German-Japanese pact occurring.

Breakfast in bed this morning and up, quite spry, by lunch time. Kidd came in during the afternoon to say that they would not be to tea owing to the dense fog.

The Aunties came to tea; in fact Buzz had to go over and bring them across and they are staying the night.
After tea I went down to Ealing per trolley bus but, owing to the fog, it would have been as quick to walk. Posted letters to Hanley and Sarfas. Called at Kidd on the way home and found there Howard and that woman Kay Gibson. Home at 7.30.

The Pater very decently stood me the 5s for the Reserve Dinner.

There is little of note in today’s news, save of course that Europe is fermenting as usual, or rather, much worse than usual.

Crawled into bed (the drawing room couch) at 6 am and after the Mater and the Aunts brought me some tea and toast, must have dropped off completely as, although I thought I was just dozing, I found it was 2pm when the Mater called me for lunch.

Did nothing much in the afternoon and after tea went shopping in Acton. After dinner wrote Sarfas and sent him the 4s 6d for the ticket. Went down to Ealing to post it and called on D. for a few moments on the way back. Found Thomasina was today promoted from her cot to a big bed. Don’t think she quite approves.

The Mater seems to me to be a bit better today, but the Pater looks very washed out. Had a letter from Daniel today; cannot understand his sneers at the League of Nations.

Today the situation worsened very much; also the number of points for trouble seems to grow. Some submarines, owners unknown but strongly suspected to be Italian, have made a torpedo attack on some Spanish Government cruisers and badly damaged one of them. Next, Mr Eden, in the Commons, has made a definite pronouncement that Britain will recognise neither side in Spain as belligerents and will take the strongest measures to protect her shipping. She is also making it illegal for any British ship to carry arms to Spain. France agrees entirely with this position, Franco was an ass not to have replied to our request for anchorages; I believe we should then have accorded him belligerent status. Eden also has dealt very peremptory with Japan’s attitude over the arrest of our sailors at Formosa last month. It begins to look as if our Cabinet is finding its mind at last.

Then, Russia has just condemned to death a German spy, one Herr Stickling, and Germany is foaming with fury and threats of war. What a world.

I am very sorry to record the death, at 101 years of age, Colonel Sir Fitzroy Maclean, who received his commission from the Duke of Wellington in 1852.

To bed again dreadfully late, or rather early, and rose with difficulty at lunch time. Joan and the girls came to teas and I took them home at 6.15. Then to Acton, (meeting Kidd on the way), where I purchased some more wireless gear for Fuzz.

Unsatisfactory evening; the washing up was a ghastly one and the water was cold. Spent some time in giving Fuzz a hand with his wireless, and that is about all. At 9pm or should one write 21.00, Mr Airey came through on the telephone. He is my Unit Petty Officer, who lives in Ealing; so they are fairly rounding me up.

There is just a bit of a lull before the gathering storm. There is a rumour that the Rebels have arrested the crew of a British ship in Arosa Bay, Spain.

The Duke of Norfolk has become engaged to the Hon. Lavina Strutt.

Was up to breakfast with the Mater and the Boys and did not go to bed until 10.30 am. Then slept until 5 pm, when  had just time to get things ready for the same folk when they came in after an afternoon at the tailor’s.

Went to the Aunts before dinner and to Kidd’s afterwards, after helping Fuzz to complete his wireless set, which I hear works quite well. Had my ticket for Saturday’s dinner from SL Sarfas tonight and a particularly kind and helpful letter.

Today was signed and announced the German-Japanese Anti-Communistic (and a whole lot more) pact. So far Herr Stickling has not been shot.

I am extremely sorry to announce that the Famous old Ceres, the 125 year old sailing ship and the oldest ship on Lloyds’ List has been abandoned in the Channel. She carried stores for Lord Wellington’s army in Spain.

Up at lunch time to find that the Aunts and Joan and the youngsters had all been in and that Ine and the Doc were coming tonight.

Down to the bank at 3.00 and back here at 4. Incidentally I met Mr Nicholson when I was down at Westminster. He looks much as ever.

After tea down to the Admiralty, where I put in 2 ½ strenuous hours. Still very hard on the uptake, worse luck. Met Sarfas and Airey.

Home at 8.10 to find Ine, Doc. and Mr Stanley all arrived. After dinner we sailed two matches when the others arrived, EH winning one and I the other. To Horn Lane as usual.

Have fallen asleep in front of the fire and it is now 3.35 am and I have got 2 hours hard routine to get through before going to bed.

Very little news today, save the usual boiling of Europe. Incidentally I see it stated that Italy has taken complete possession of Majorca.

Was busy all night until 6.10 am on routine work, so decided it was not worth going to bed. Therefore was able to let the Mater sleep on till 9, while I gave the Boys breakfast. Had a second breakfast with her and then decided to go for a walk, as the sun was shining for the first time for weeks.

Walked down to Kew Bridge, where I saw large scaffolding projecting into the River and found a big drain pipe being built out into the stream.

Walked home via Brentford and S. Ealing and accomplished just over five miles before lunch. After tea paid a flying visit to the Library. Then was busy on routine till 10.30, and going to bed actually at 12 tonight.

The only news of note today is the death of Sir Basil Zaharoff, the famous international armaments dealer.

Actually went to bed at 12 last night and slept until the Mater brought breakfast at 10.30, and then again until 1pm. Must say I feel much refreshed.

After lunch went shopping in Acton for the Mater and then went over to the Aunts’ for tea. Back at 5.30 to dress for the RNWAR 1ST Division dinner.

It was held at the First Avenue Restaurant in Holborn and was quite a good affair; though I must say I was disgusted by the waiters handing round plates for tips afterwards. The guest of the evening, Admiral Brownrigg, ACR, made a good speech, but the other speeches were appalling. Met many good chaps but much fear they are all wireless fanatics.

Home by 12.30 to find the Mater and Buzz had a fine hot tea awaiting me, Sorry to fond the Pater has gone off to bed unwell.

Not much news save that Franco does not appear to be relishing his position overmuch.

To bed at 4 am and of my own accord woke at 10 am, in time to help the Mater with the breakfast and to get the papers. Then at 11 went round to Airey’s to put in a morning on wireless. He is quite a decent chap and certainly seems to be a nib at his job. I greatly envy him the beautiful house he stays in. We put in two hours on wireless and it was more than enough for me. Went on to the Aunts’ and had a cup of coffee with them.

Kidd brought along Thomasina this afternoon and I escorted them home just after six. Went on to Ealing to post some letters for the Pater.

Have been busy on trying to increase the wireless reception of Fuzz’s set. Also practising Morse, but am still painfully slow. As a matter of fact, what with my slowness on Morse and complete antipathy to wireless I begin to fear I have made a big error in joining the Reserve and …will never be any good at it.

To bed at 5 am (quite an improvement for me) and woke without effort when the Mater brought me breakfast at 10.30. Up and dressed for lunch.

After some routine work and shopping went round to the Aunts’, whom I found very perturbed over a ceiling which had fallen in their flat. Then, with many misgivings and much reluctance I went off to the Admiralty.

However, I managed to do a little better, so for another evening I live; but more and more I feel the thing is not my metier.

Coming home I saw a great red glare in the sky to the S.E. Then, the news coming on, it came out that the Crystal palace is on fire and there is no hope of saving it. It is a terrible calamity and I for one am extremely sorry, since it is a link with that late Victorian and Edwardian London which fascinates me so queerly.