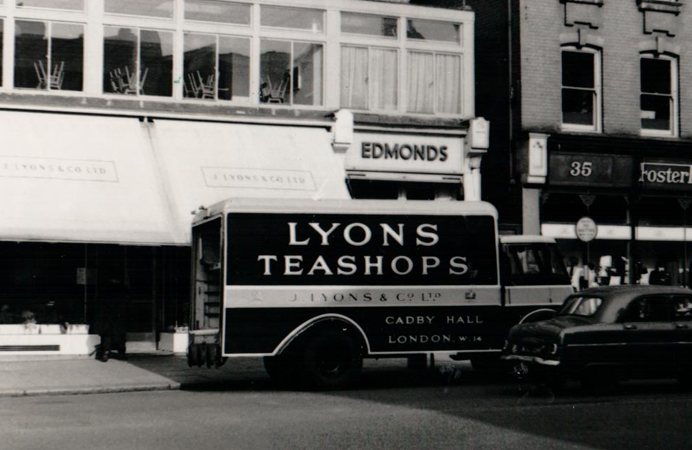 Week 42 sees Goodlet lament the state of world affairs as war creeps ever closer: ‘What a world. Really, it is just bedlam compared with the last century.’ A nice trip to Lyons tea shop (pictured) in Ealing calms the nerves. See past weeks, and an introduction, in the history section.

Woke at 1pm and rose feeling both icy cold and dead beat. Pretty busy on routine work all afternoon until tea time, when Kidd, Joan and the youngsters came. Afterwards I saw them home and went in to Ealing shopping. Called on the Aunts to give them some papers and found that they were worried over a damned newspaper paragraph saying a British constable had been killed in a lorry accident in Jaffa. No names of course, damn them. This has fairly poisoned the evening, but there is no word, so one hopes all is well.

Curiously enough today comes the glad news that the Arab Higher Committee has called off the strike; which, if it is given general effect, will mean a lessening of the horrible anxiety we have undergone here for so long.

Not much other news. Italy announces an enormous programme of new armaments and so the mad dance goes on.

The Mater’s cough has been very bad today and I hope to goodness it won’t last long this time.

Very pleasant day. The Mater brought me breakfast in bed and the good news that Jock is alright, although there will be mourning in one home today for the poor chap that was killed yesterday. God comfort them.

Ine, the Doc. and Margaret all arrived before lunch and seemed to me to be in very good form, The Aunts came for tea and altogether it was a very good reunion. The Brighton party left at about six and should have had a good run down.

The Aunties I saw off about 10.30. Still the Mater’s cough is persisting and seems to tire her a terrible lot; although I suspect much of it must be due to worry and “nerves”.

Tonight on the wireless was one of the best things I have heard, “The Centenary of Mr Pickwick”; we all greatly enjoyed it.

Just hopped into bed at the critical moment before the others rose, and immediately after old Fuzz brought my tea. I must have dropped off, for the tea cup was still in my hand when the Mater woke me at 12.30.

Busy in the afternoon and took Joan and the youngsters home at six, after which I went on to the Library and Woolworths, and finally to tea at the Aunts’. Next, to dinner with Kidd and Joan, with whom I spent a very charming evening. Home by 11.45.

The Pater is engaged on the compilation of a family photograph album, so I have just turned out my own collection for him to make a selection. The Mater’s cough seems to be improving, TG.

…Had a letter from Daniel this morning. Then cessation of the strike seemed to have brought rejoicings in Palestine. The latest joke is that as the German General Staff think that the sense of humour which our soldiers possess is a great asset their own troops are to be instructed in a sense of humour.

The Mater very wisely determined to have a morning in bed so I rose after the youngsters left and gave her and the Pater breakfast. Was busy till after lunch, when, I’m afraid, I slipped back to bed and slept until 4.30.

After dinner tonight I wrote Daniel and then went round to the Aunts’, with whom I spent a pleasant hour. Intended to get to bed early but find I am messing about just the same as ever.

The Mater’s cold is distinctively better, but she seems utterly worn out. If only something good would happen to cheer things up a bit I’m sure it would be the best tonic for her.

There is not much of great interest. Sir G. Collins, the Secretary for Scotland, died today in Zurich. Hitler is now foaming about France, owing to a French Communist having made a speech about him. What a world. Really, it is just bedlam compared with the last century.
I see there is a government proposal to ban political uniforms here. About time too.

Up late and as tired as ever. Busy all afternoon and after tea took Joan and the little girl home.

After dinner went to the Broadway to meet JD and we revived old traditions by having coffee in Lyons. How strange the place looks and how unfamiliar the people. Very agreeable chinwag and walked home via Madeley Road…

Up rather earlier today and after lunch to the bank. After tea down to Ealing, where I was stung for 1/9d. for a fresh heating element for that confounded dining room stove.

After dinner Mr Stanley, Kidd. JD and EH came in and we sailed two very hot matches. In the first Kidd and JD were a long way first but, as they had jammed me against a buoy I fairly pinned them in the second race and they came in last. To Horn Lane as usual with Stanley who has a desperate bad cold; it was very decent of him to turn out. The Mater’s cold is still far from better.

The great sensation today is a speech by the King of the Belgians, virtually withdrawing from the French military alliance and the Locarno Pact; this has fairly upset France and really, it is a little difficult to see what could be behind such an announcement. It is either some secret deal with Germany or just complete fed-upness with France and England and doubt of their power for strong collective action in case of trouble. In any case it is disturbing.
Spanish Gov. ships have sunk a Rebel transport on the Straits (of Gibraltar) and the Rebels have sunk a Gov. submarine.

Up late as usual and more bone weary and listless than ever. Busy in the afternoon, and after tea to the Library and the Aunts’. Quiet evening.
There is extremely little news today. The capitals are still seeing over King Leopold’s speech yesterday and no one yet seems quite clear as to its implications.

Today Miss Jean Batten landed in New Zealand on the completion of her truly amazing record flight from England in 11 days. Splendid, but damned silly.

The Mater seems better, although her cough is still troublesome; and now it seems as if the Pater is developing it.