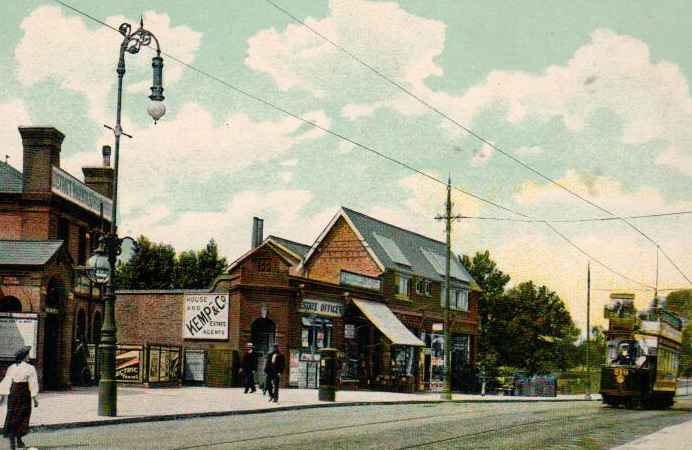 “I think Germany is in the grip of a madman, and sooner or later we will all be involved in the bloody and futile mess,” writes Goodlet as events in Europe take on an ever more sinister aspect. Meanwhile, he witnesses a crash next to Ealing Common station (pictured) and marks his birthday with a somewhat maudlin assessment of the year gone by. This is the 14th week of our serialisation of his Ealing diaries from 80 years ago. You can read the introduction, and find all previous weeks, in the history section.

After dinner was busy typing letters for the Pater until 10, when I took them down to the air mail box in Ealing. Went on and paid a brief call on the Aunts before returning home.

The Pater is gravely concerned at business affairs as, owing to Adam’s curious practices (to give them no worse name) the Company is faced with a serious reverse and possibly the closing down of the Spanish business; and then what on Earth is to happen here God only knows. It’s a damned shame if those two boys’ education is to be cut short, especially Fuzz, who is just starting at M.Ts. Something must be done.

The Italians have now completely destroyed the city of Harrar by bombing. Bloody barbarians.

Centenary of the Pickwick Papers.

Slept pretty late, but after lunch went down to the bank and walked along the Chiswick High Road and had a look at the old steam loco. Again.

Was expecting to put in a good evening’s work on the map, but Mr Stanley came in and so that went by the board. However, we had a very jolly evening. Walked to Horn Lane with him.

The Pater is still in the toils of Adam’s queer manoeuvres, and what I see of the situation appals me. God alone knows how things will turn out.

The Italians seem to be running absolutely amok in Abyssinia; in addition to bombing they are now using poison gas. Complete swine.

I was shocked to note that Madame Supervia, the famous singer, died suddenly yesterday.

That poor devil Bruno Hauptmann was to be executed tonight and I suppose is dead by this time.

afternoon. She walked both here and back in the gamest manner possible and was in tremendous form. She really is a great wee soul. Took tea with Joan and saw Annabelle, who has gained a whole pound since she was born. She is coming on wonderfully and it is amusing to see how proud Thomasina is of her. Visited the Aunts and found them very busy. Have been very busy myself since dinner on a dozen necessary things.

Hitler’s proposals are reasonable enough in appearances, but I don’t think they amount to anything. I have the feeling that he is only waiting to go for some country or other.

It would hardly be believed, but they have reprieved that poor devil Hauptmann for 48 hours.

Slept till lunchtime, and thereafter to the bank. On my return, at Ealing Common station, I saw a very bad accident when a big lorry, in skilfully avoiding a P.O. messenger boy whose motorcycle had fallen, crashed into and pancaked a car. It was a sickening business and I made sure the lorry was going to go over the boy.

However, it wasn’t so bad as that.

Went on to the school, where I had tea, and brought Mr Stanley back for dinner. Kidd and Ernest came in afterwards and we sailed two matches, one of which I won, and deadheated for the other with Ernest.

Not much news. I don’t know how the business situation stands, but should imagine it was bad.

The French are furious at Hitler’s proposals and, if they go on like this, will cause something to boil over somewhere with a vengeance.

I hear that the King has bought a Buick car. This is most unfortunate.

Rose very, very tired at 12 today and followed Breakfast almost immediately with lunch. Busy on various jobs in the afternoon and after tea went off to Ealing to airmail letters, visit Woolworths, the Library and finally the Aunts, to give Aunt Jess a lot of silver paper collected for her by Mrs Stowell.

Buzz spent the afternoon and evening with young Stowell and Fuzz went to Joan’s for teas. Fuzz has a really bad cold I am afraid.

We had dinner quite early and so I have been able to put in quite a bit of time on the map. Even so, one can hardly tell where one has been.

Wrote Daniel today and TG, have had no letter in myself.

Eden made a very good speech in the House today explaining things. Personally, I am filled with foreboding over the situation. I think Germany is in the grip of a madman, and sooner or later we will all be involved in the bloody and futile mess.

Worked until 4 am on the map and then after a few household jobs got to bed at 5 am. Result; was like a corpse over breakfast in bed this morning and damned tired until about 10pm.

Went down to W. Ealing after tea and then called on the Aunts on the way home. Have world steadily on the map since 10 pm. And it is now 5 am. But it goes dreadfully slowly.

Tomorrow, or rather today, being my birthday, they all wished me a good new year at 12 pm and the Mater has given me a beautiful pipe, while the Boys’ gifts are a pocket microscope and some cigars. Very decent of them all in these ghastly days. Also had a letter from the Aunts.

Very little news. I see that they executed that poor devil Hauptmann after all last night. He protested his innocence to the last and quite possibly he rally was son. What a gang of savages the Americans are.

Today Cambridge won the Boat Race in classis style again, making a run of thirteen wins against Oxford; but Oxford certainly made a fine race of it.

NOTE
In accordance with custom, on the eve of my birthdays I am jotting down a few memories of the year that has gone. I have open before me this same page in my last year’s journal and I see that I noted then a beginning of a slight improvement in things. Well, I suppose it has gone on; but oh, how dreadfully slowly and here we still are, tormented by debts and driven to our wits’ end by shortness of cash for needs as they arise. Still. Thank God, we are all spared to one another and we have got through and there are always hopes at least.

Certainly the year that has passed has been one of much incident and by no means dull. The Pater’s journeys to Egypt and Spain, my three delightful holidays at Brighton, Angmering and Wantage, not to mention my recent jaunt to Southampton. Then there was Fuzz’s successful entry to Merchant Taylors School and the birth of my youngest niece Annabelle.

In the larger world there have been the Death of the King (George V) Admirals Jellicoe and Beatty and Rudyard Kipling, all within three months, the Italian attack on Abyssinia and the German denouement. Certainly it has been an eventful year and in addition to all these things, of course, there was the magnificent Silver Jubilee and all its attendant functions and ceremonies.

Then, to return to personal matters, Jeanette has gone to South Africa and any chance of our romance coming to anything seems more remote than ever. I wonder why this is. The only person who has trusted me that I have ever let down.

As for myself, I have passed the year in the same round of futilities that lead nowhere, as I have passed so many others; but at least I had and enjoyed a wonderful home. I see last year I took a vow not to read for a year. Well, I have broken it completely. Typical of me.

Well, another birthday has passed and it has been a quiet and happy day. I did not get to bed till nearly seven this morning; consequently my overnight intention to go to church did not get fulfilled, for when the mater awoke me with tea I was just a log. However, I rose for lunch and between that and teatime had along, magnificent scalding bath.

The Aunts were here and Kidd and Thomasina came over with birthday gifts from his family. Afterward I typed a letter for the Pater and took it sown to Ealing for the air mail. Called in on Kidd and Joan on the way back and spent a pleasant half hour with them. I wish I could get that wretched feeling of soreness out of my mind about their intention to call a son Alexander; somehow it seems to make me hard with them, and it’s bad when they are so friendly.

Stanley was to dinner and we spent a fine musical evening. I am sorry the aunts had to leave early. Walking to Horn Lane with Stanley and intend to celebrate the birthday with a reasonably early retirement.