Home > The adventures of an Ealing lecturer 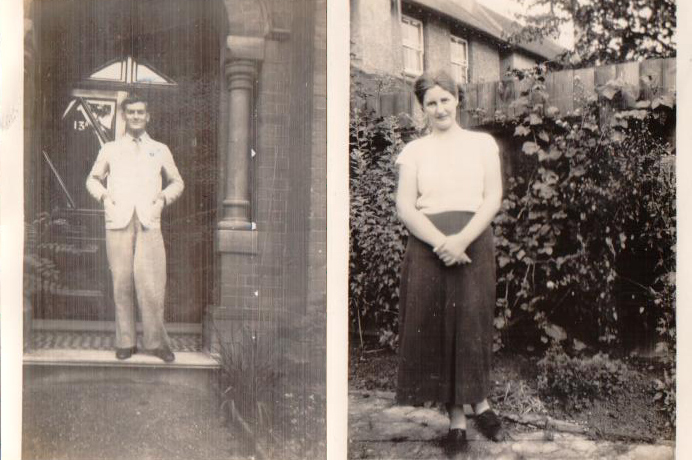 The adventures of an Ealing lecturer

Following on from our serialisation of an Ealing man’s 1930s diary, Dr Jonathan Oates looks at another local man’s life experiences of the same period. It is a life that encompassed a fearful mother trying to prevent a love affair; the teaching of an ‘inveterate drunk’; attempts to make visitors laugh at the National Portrait Gallery; and months travelling up and down the country to make a living. Oh, and toenails as tough as iron gates…

Maurice William Bruce (1912-1988) was baptised in Hammersmith in June 1912, the son of Charles Abraham and Annie Ada Bruce. He attended Acton County School, then deemed a public school, from about 1923-1930 and then took a BA degree. By 1932 he was living with his parents, his two brothers and a sister, at 1 Drayton Gardens in West Ealing.

We know about him because he was a friend of peripatetic diarist Henry St John (1911-1979), who attended the same school but left in 1927 to pursue a largely frustrating career in the civil service. The two were members of a social club known as the Amici, which met in Ealing from 1927-1934. They seem to have involved a simple dinner and then some form of entertainment such as a lecture on poets, listening to classical music or scenes from Shakespeare or members being stand up comedians. Bruce was president and in 1932 was considering standing down ‘he did not want his administration to end in a mess’ and was concerned that ‘next year he took his degree and he would want as little distraction as possible’. However, his resignation was not accepted by the committee. He seems to have dominated some meetings: ‘The business appeared to consist of listening to Bruce talking and hearing on the wireless those items he wanted’.

Bruce had a keen interest in history; in his teens he had begun a collection of medieval coins. He managed to find a career which matched his hobby. Bruce became initially a part time lecturer, mostly about portraits of past royalty. St John recalled seeing him lecture at the National Portrait Gallery in 1933. On one occasion he discussed the early Hanoverian monarchs, ‘This dry subject he tackled in a discursive manner. His attempts to make an unpromising audience laugh were not very successful’.

St John visited him at home on a regular basis and, on the first occasion, St John saw ‘an imposing array of books’. There were also ‘portraits of royalty and great men’.

It was in that same year that he became engaged, to Maude Jenkins, described by St John thus: ‘19, a brunette, wore a green frock, brown shoes and stockings, with a grey outdoor coat. She is a student at the history school at King’s College, and hopes to become a teacher’. However, on 21 October 1934 she was homeless. This had come about because: ‘Miss Jenkins’ parents, it appeared, were opposed to her association with Bruce, on the grounds that if she married their sacrifices made for the sake of her future education would have been made in vain. They offered her the choice between Bruce and her career and she ostensibly accepted her career but continued to meet Bruce secretly’.

Yet ‘wicked stories of their association were promulgated’ and so when she returned home three days ago, she found that she was locked out. One of Bruce’s friends had a spare room, so he allowed her to use this, but had meals at Bruce’s house. Her mother asked her to return, but Maude replied ‘in words which to me savoured of Hollywood, that she would not let Bruce go’. She was also concerned that her college might expel her for her conduct. Yet when she explained the situation to her, it seemed that she might be given a grant which she could repay when she found employment.

St John concluded: ‘Her immediate prospects envisaged living in poverty in a furnished room, in renting a room, and furnishing it on the hire purchase system. Meanwhile she and Bruce were going around arm in arm, for fear lest an attempt might be made to kidnap her’.
Bruce was fond of music and purchased a gramophone on credit in early 1935. In 1929 he was noted as being an oboe player.

In 1935 he wrote an essay about the Jacobite leader, the Earl of Mar, for the Royal Historical Society for a prize. Presumably he did not win. He was living in Skirmett in the summer of 1935 and when St John visited, showed him around Henley, Hambleden and Skirmett. He wrote daily to Edward Hardy Raven, a middle aged schoolmaster, whom he lived with, between 1935 and 1937.

By the end of 1935, Bruce was living with Raven, in a flat, 13a Woodgrange Avenue, near Ealing Common, and had to write 72 Christmas cards. Apparently Maude had a cold ‘and had been over working’. There was bad news for Bruce, too, ‘at the viva voce interview about his thesis, a man named Thomson had objected that the thesis contained nothing about the state of the Jacobite party in England. Bruce was therefore referred. He thought this might hold up his getting his MA for a year’. The thesis was rejected and it is not known whether he ever achieved a postgraduate qualification.

On visiting Bruce on 4 January 1936 St John learned: ‘Bruce said he celebrated Jubilee Day (9.5.35.) by cutting Maude’s toe nails, which were as tough as two iron gates’. He typed reports on the places where he had lectured for the benefit of the Cambridge lecture board. Bruce also marked essays submitted to him by those attending his lectures at Heathfield. They had had to discuss whether Henry VIII had been a great architect of Parliament and whether the Elizabethan age had been a glorious one; apparently most ‘went to considerable length, but some did not keep to the point’. He had lectured at Heathfield in Sussex on Charles I and Cromwell. At Huddersfield he lectured on ‘Democracy and dictatorships in modern Europe’ in the following month.

His collection of books was growing, with volumes on the memoirs of the Queen of Rumania, Hitlerism, Pitt, Stresemann, Queen Victoria, Windsor Castle and Winwoode Reade’s Martyrdom of Man. Lecturing was making him money for he had been a locum for another lecturer on modern politics, who was ill, and he had been to several towns in southern England, earning £20 a week. At Reigate he had been warned to be careful on his comments on the League of Nations as people were in favour of it there.

In the summer term of 1936 he had been employed as a coach to a wealthy undergraduate, aged 20. Apparently, this student ‘had made a complete mess of his examination. He was an inveterate drunk, and half way through the proceedings he ran away from college with the idea of stowing away on a ship bound for South America. After the police had been called in to find him, he had turned up at his home in Haslemere, and was sent back to finish the examination. He had climbed out of college at night, accumulated debts to the tune of £20,000 and last year drank two bottles of brandy a day. Asked what would become of him, Bruce said he would probably commit suicide, the sooner the better’.

Bruce seemed so immersed in history that he bemoaned the fact that St John could not fight a duel over the honour of a female relative of his, ‘He said it was a pity I could not call Will out. As Rene had no brothers, I was the nearest male relative of fighting age’.

There was more news from Maude in June. Having begun a teacher’s diploma course in the last year, she was now presumably qualified. She had gained an appointment at a school in Sutton Coalfield to begin in September and she would be teaching history and scripture. They did not know whether it was a school where women teachers were allowed to marry, ‘if so their troubles would appear to be over for a bit’. Meanwhile he was in the flat on his own until September, but was to go down to Heathfield for a while. Later that summer he went with Maude to Birmingham to find accommodation there for her. The two were then to visit various places, including south Wales, Yorkshire and Scotland and then Skirmett. He wanted to get married in a register office because he was not a churchgoer; and desired to be cremated with ashes scattered over the Brecon Beacons.

Bruce became a travelling lecturer, having covered 10,000 miles in one term, in Scotland and in Devon. Bruce then left Ealing and he and Maude married in the summer of 1937 in Sutton Coalfield (St John was not apparently invited) and were living in a suburb of Sheffield two years later where it is believed they continued as teacher and lecturer, respectively.