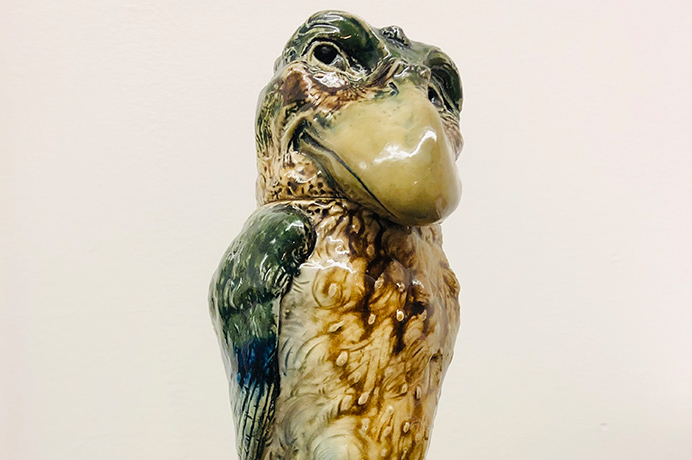 Many of you will know that the Dominion Centre in Southall houses an exhibition on the famous Martinware pottery and the Martin brothers who created it in the town in the 19th Century. However, some may not realise that, 15 years ago, a unique piece of the collection was stolen. Amazingly, it was recently recovered – and our borough archivist played a role in its unexpected homecoming.

“Anyone who know the books I have had published, knows I have an interest and knowledge in true crime, but I never thought that my job would involve me in a real-life crime investigation.

“In June of this year I had an email from Mr Wilson, whose son Nigel Wilson had seen that a piece of Martinware pottery, a Wally Bird, to be precise, had appeared for sale on ebay. The Martinware is the name given to a distinctive kind of pottery created by the Martin Brothers in Southall at the end of the 19th and the beginning of the 20th centuries. The Wally Birds were tobacco jars in the shape of grotesque birds of prey and all, though similar, were unique creations. They are highly collectable and can fetch high prices on the global market. That an item of this nature was being put up on ebay (at nearly £30,000) was odd in itself because, normally, such items would be sold at an auction house. But then an auction house would insist on being shown evidence of its provenance and possession. My friend, Lindsay Siviter, who has worked at Scotland Yard and is a museum professional, confirmed my thoughts.

“Mr Wilson told me he believed that this was one of the items stolen from Southall Library in 2005. I checked the listings that we have at Southall Library as well as the online Antique Trade Gazette and verified that a Wally Bird which matched that advertised on ebay had indeed been stolen. The description and the date inscribed on the pottery matched. This looked promising, but on contacting Scotland Yard I was eventually told that in their opinion the two were not the same and so the investigation ended. This was disappointing, but not unprecedented, as looking back in my 2013 diary I found that there had been a similar incident then, with a Wally Bird having been seen for sale but, on this being reported as being one belonging to the library, no police action was taken. Nobody bought the current Wally Bird pot at the high price asked for and the item was subsequently removed from ebay in the summer.

“The story could well have ended then, but in September I was sent encouraging news. Alison Davey, an antique dealer in Oxfordshire, had been offered a Wally Bird for sale. She is an authority on the Martinware and was suspicious that the would-be seller could not offer any provenance on the item’s history. She contacted Christopher Marinello, a recovery specialist of Art Recovery International, who told me about this. This was a new link and Christopher’s track record was encouraging. He did much work in liaising with both the police and myself. The item was confiscated by the police from the owner and held at Acton police station. Some weeks passed before it could be verified that this was indeed the one stolen from Southall Library and expert auctioneers from Salisbury were enlisted to check the item against the evidence that I supplied.

“Eventually, at the beginning of November, they were satisfied that it was so, and I met Christopher at Acton police station. We entered, the first time in decades I had ever been into such, and were shown into the little room where voluntary statements are made to the police, complete with cassette recorder for recording interviews (not used in this case). After a brief chat and an examination of the Wally Bird, which came in two pieces (the body of the bird where tobacco would have been stored, and the beak like head as the pot’s top), I took it back to a safe place in an Ealing library.

“Not quite a job for Sherlock Holmes or the Sweeney, but highly satisfying to have played a part in the recovery and return of a stolen item to its rightful owner. Hopefully in the future more of our stolen collection will be recovered.”

You can read a previous article by Dr Oates on the Martin brothers and the Martinware collection in Southall.