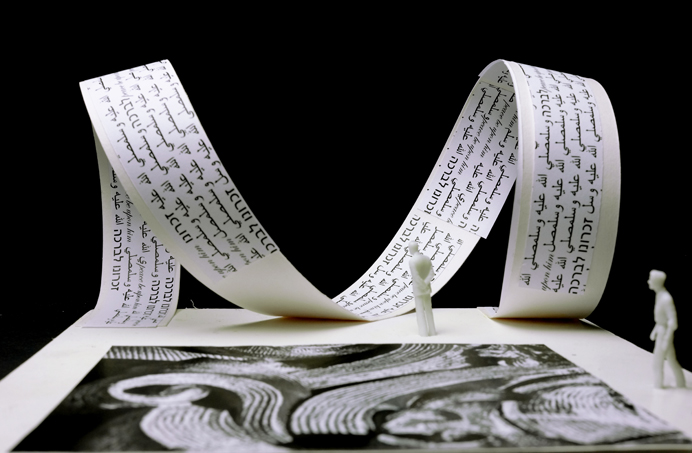 Following a talk given at Ealing Central Library, an exhibition there has been showcasing designs by local school pupils of how they imagine a multi-faith place for worship might look in the future after looking at sites from the past and the present.

The creative work by the students from Brentside High School in Hanwell was done as part of a university research project Making Suburban Faith, based at University College London and Royal Holloway.

This project is studying how a variety of faith communities in Ealing have been established and how they have developed. It is exploring the ways in which suburban faith communities create ‘space’, focusing on architecture, material cultures, rituals, music and performance.

Award-winning architects Mangera Yvars  helped the pupils in their design challenge.  The students worked with researchers to examine the wide range of purpose-built and converted worship spaces which exist in our borough. They visited local architectural gems like St Thomas’ Church in Boston Manor, as well as creatively adapted buildings for worship such as the SKTA temple in Chapel Road in West Ealing, a former Baptist Church, and Elim Pentecostal Church in Northfields, a former cinema.

The students’ designs for a new multi-faith space for Ealing are imaginative and include multiple entrances; circular connecting floors; glass staircases with multi-faith lettering; and open flexible public spaces. The architects from Mangera Yvars built models based on the students’ designs for an imagined building in Greenford Avenue in Hanwell.

These models form part of the Architectures of Shared Space exhibition at the library, along with their design work and their reflections on the project. One said: “We are all from different religions, we all worship in completely different ways and that’s more or less a reflection of what we’re trying to do with this building.”

Another said: “If it was to be built I think it would be such a platform to allow people to look beyond what they see in the media.”

The exhibition runs at Ealing Central Library until Friday, 24 June when it will move to Somerset House in central London later in June for the Utopia’s Fair organised by the Arts and Humanities Research Council which funded the project, before returning to Brentside High School for its own arts week in July.