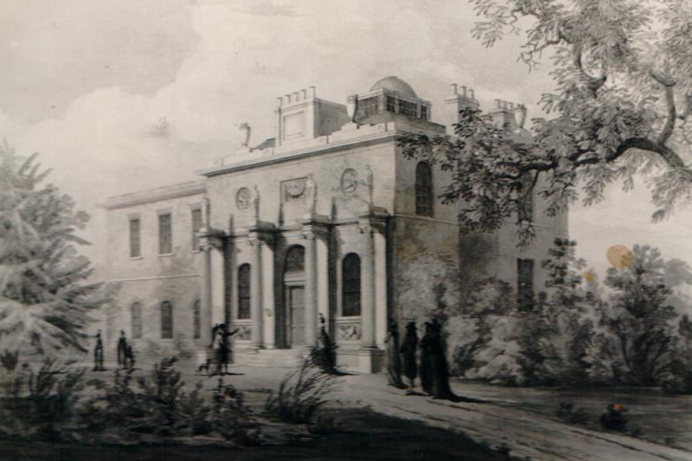 Pitzhanger Manor has been closed as part of a large project to restore it to its former Regency-era glories – inspired by its most famous past owner, Sir John Soane. Its former grounds, Walpole Park, were reopened by the council last year after a similar makeover.

The association of Soane and Pitzhanger Manor is well known, and it is common knowledge he bought the house in 1800. But it is less well-known that he had become aware of the house many years previously.

This was because, when the bricklayer’s son was a lad of just 15 years old, he had worked in the offices of an architect called George Dance when Dance was employed to extend the original mansion house in 1768.

And so, when Soane bought it for himself in 1801 as a man in his late 40s, he was buying somewhere he had already worked on.

Between 1801 and 1803 he demolished the original building but kept the wing Dance and he had worked on years before (this is the southern portion of the house).

By then Soane was a renowned architect and surveyor himself with a distinguished portfolio of work, including with the Bank of England and Royal Hospital Chelsea.

The house in Ealing was not bought as a family residence, however. Rather, Soane and his family lived in Lincoln’s Inn Fields. His house there, which he also designed, can still be visited because he established it as a museum by act of Parliament in 1833, requiring that the building’s stylised interiors be kept as they were at the time of his death (which came just four years later in 1837).

A second house in the ‘countryside’, as Ealing was then, to entertain guests outside the city of London would confirm his position in society and provide space for his ever-expanding collection of art and artefacts. In fact, he first bought a plot of land in Acton in 1800 for this purpose but sold it when Pitzhanger Manor came up for sale a year later.

One of Pitzhanger Manor’s other purposes was to serve as a place of architectural education for his two surviving sons, who he hoped would follow in his footsteps as an architect. John junior had been born in 1786 and George three years later. However, by 1810 it was clear that John junior would not make an adequate architect and George was uninterested.

Combined with the added factor of his wife’s declining health, Soane decided to sell the house.

But by then he had carried out extensive work on both the house and the grounds (now known as Walpole Park) and left it transformed.

It was meant to be a kind of self-portrait. He wanted it to preserve various fragments of antique sculpture by including them in what he thought of as being an Italian villa. In the late 18th Century Soane had been on a Grand Tour in Italy and greatly admired what he had seen. So, in the grounds of the house he had built a number of imitation Roman ruins, recalling what he had seen. These no longer exist.

Inside the house, now Grade I listed, there is much that survives of his vision. The decorations in the breakfast room drew their inspiration from wall paintings from a Roman house that Soane had seen. The entrance façade is meant to resemble a triumphal arch, again something he would have seen in Italy.

Another legacy was its name, which Soane spelled with a ‘z’ in Pitzhanger. Previously it had variously been Pits Hanger, Pitts Hanger or Pitshanger.

You can read about the current restoration project, led by the council and the Pitzhanger Manor Trust, online at www.pitzhanger.org.uk

Find out more about Soane on the official website www.soane.org

This was originally published in the winter 2014/15 edition of Around Ealing.