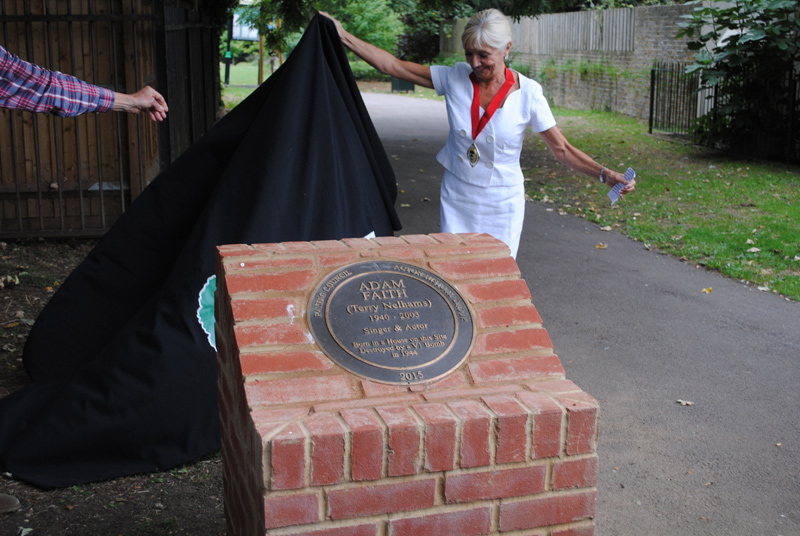 A plaque has been unveiled in Acton on the site of the former house of the late singer and actor Adam Faith.

Adam Faith was the stage name of Terry Nelhams. Terry was born in a house which used to stand just inside the park, but was destroyed in the Second World War.

He was born there 75 years ago, in 1940. A few years later the house was hit by a German V1 bomb and the family had to move to Goldsmith Road, just over the other side of the level crossing.

Research by Acton History Group found the performer’s birth certificate listed his birthplace as being 4 Churchfield Road East and it asked the council’s Acton Central ward forum to fund the plaque on the site where the house once stood.

Terry’s widow, Jackie, who now lives abroad, saw a picture of the plaque and said: “I think the plaque is lovely and Terry would be as pleased as punch.” She and their daughter Katya will visit the site when they are next in the UK.

The star had number one hits with What Do You Want? in December 1959 and Poor Me  in January 1960 and had eleven top 10 records in total. He also acted in films, television shows and plays, including the TV series Budgie in the early 1970s and Love Hurts with Zoe Wanamaker in the early 1990s. He died in 2002 aged 62 while on tour acting in a production of Love and Marriage.

David Bays, chairman of Acton History Group, said: “Our thanks go to the council’s ward forum for approving the idea and installing the plaque so that future generations will be able to visit and see the spot where an international star made his humble beginnings.”

The group was recently involved in installing a plaque to commemorate the first Waitrose shop in Uxbridge Road – which is now Babylon Pizza; and another plaque to celebrate the Winnie the Pooh character, which was inspired by one of the toys manufactured by the Farnell factory that once stood on the site of the current Twyford School.

This originally appeared in August 2015