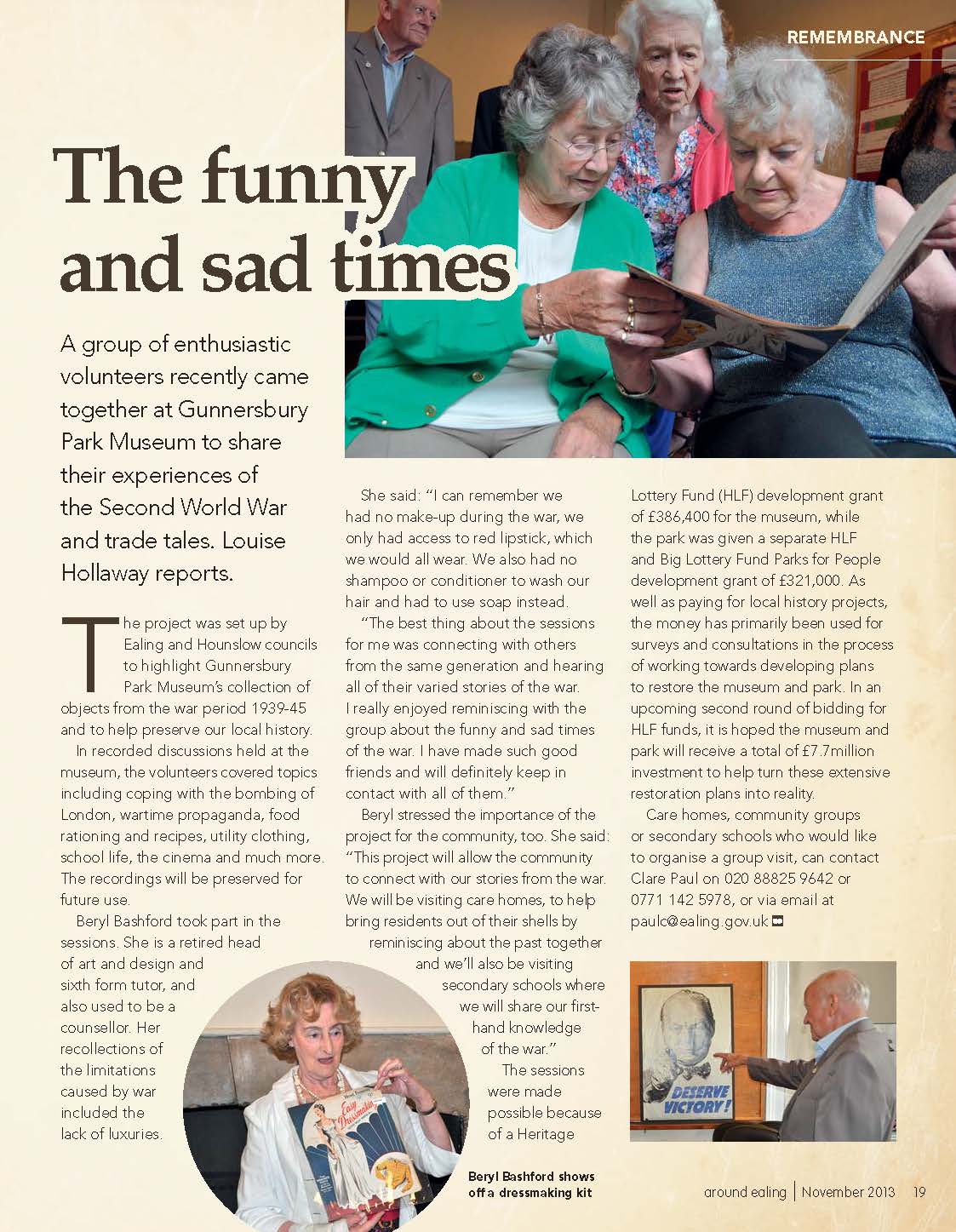 A group of enthusiastic volunteers recently came together at Gunnersbury Park Museum to share their experiences of the Second World War and trade tales. Louise Hollaway reports.

The project was set up by Ealing and Hounslow councils to highlight Gunnersbury Park Museum’s collection of objects from the war period 1939-45 and to help preserve our local history.

In recorded discussions held at the museum, the volunteers covered topics including coping with the bombing of London, wartime propaganda, food rationing and recipes, utility clothing, school life, the cinema and much more. The recordings will be preserved for future use.

Beryl Bashford took part in the sessions. She is a retired head of art and design and sixth form tutor, and also used to be a counsellor. Her recollections of the limitations caused by war included the lack of luxuries.

She said: “I can remember we had no make-up during the war, we only had access to red lipstick, which we would all wear. We also had no shampoo or conditioner to wash our hair and had to use soap instead.

“The best thing about the sessions for me was connecting with others from the same generation and hearing all of their varied stories of the war. I really enjoyed reminiscing with the group about the funny and sad times of the war. I have made such good friends and will definitely keep in contact with all of them.”

Beryl stressed the importance of the project for the community, too. She said: “This project will allow the community to connect with our stories from the war. We will be visiting care homes, to help bring residents out of their shells by reminiscing about the past together and we’ll also be visiting secondary schools where we will share our first-hand knowledge of the war.”

The sessions were made possible because of a Heritage Lottery Fund (HLF) development grant of £386,400 for the museum, while the park was given a separate HLF and Big Lottery Fund Parks for People development grant of £321,000. As well as paying for local history projects, the money has primarily been used for surveys and consultations in the process of working towards developing plans to restore the museum and park. In an upcoming second round of bidding for HLF funds, it is hoped the museum and park will receive a total of £7.7million investment to help turn these extensive restoration plans into reality.